10 facts about the 2014 PWA Slalom final at Noumea

It was an event with wind from 9 to 30+ knots. “Benny” won already the IFCA Slalom World Championship earlier this year at Terxeira, Azores, but won now his first PWA event. The 35 year old Dutch man dominated the event at Noumea in New Caledonia. In the end he had the lowest discard of the whole fleet with 16 points. 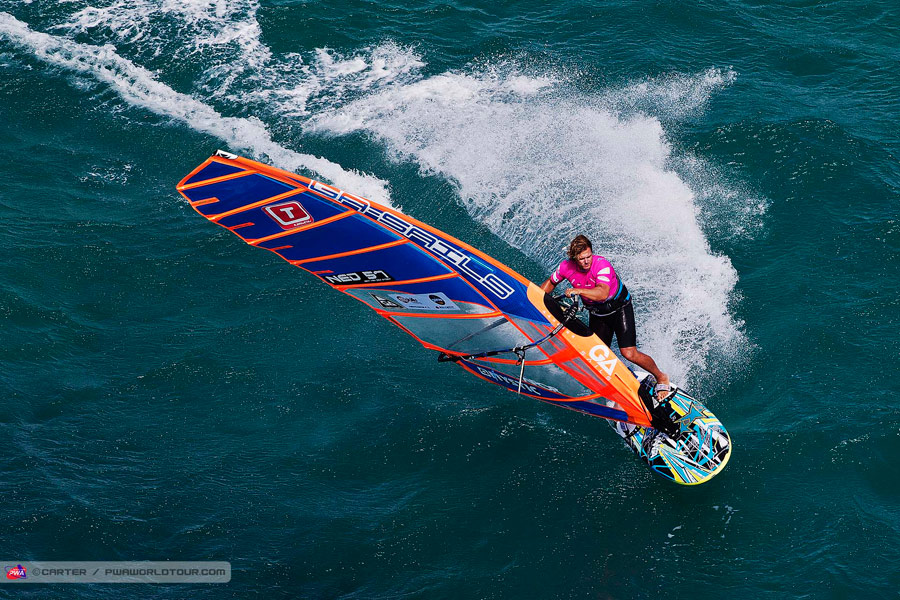 2. The fight for the men’s overall slalom title was exciting and Cyril Moussilmani the unlucky 2nd behind Antoine Albeau
Cyril Moussilmani arrived as the overall leader at Noumea and left the island in 2nd after 9 eliminations and 4 days of racing. After 4 rounds and one discard he was still on title course. In elimination 5 a not perfect jibe during the semifinals at the second last mark opened the door for team colleague Björn Dunkerbeck to overtake Cyril on the final reach by a few meters only. The result of this overtaking maneuver saw serious consequences. Cyril did not qualify for the winners final. Antoine won elimination 5 and kept the lead by one place over Cyril Moussilmani until the end of the event. Imagine, the top riders, who qualified for all winners or losers final, jibed 144 times around a mark. So, it’s quite possible to execute one or two jibes not perfectly. The final was a tough battle indeed. All riders were fighting on its own. Definitely no team sailing. In the past we sometimes saw great support by Cyril’s twin brothers Benoit and Sylvain, but they stopped to compete earlier the season.

At the end just two riders scored more than 10.000 points overall. Antoine Albeau won with 10170 points the 2013 PWA Slalom World title. Cyril Moussilmani made it in second with 10154 points. That was a close battle in 2014. Antoine won 10 eliminations throughout the whole season, Cyril won 2 and made it into the final in Turkmenistan. But Cyril was incredibly constant throughout the whole season and missed his first PWA world title by a few points. 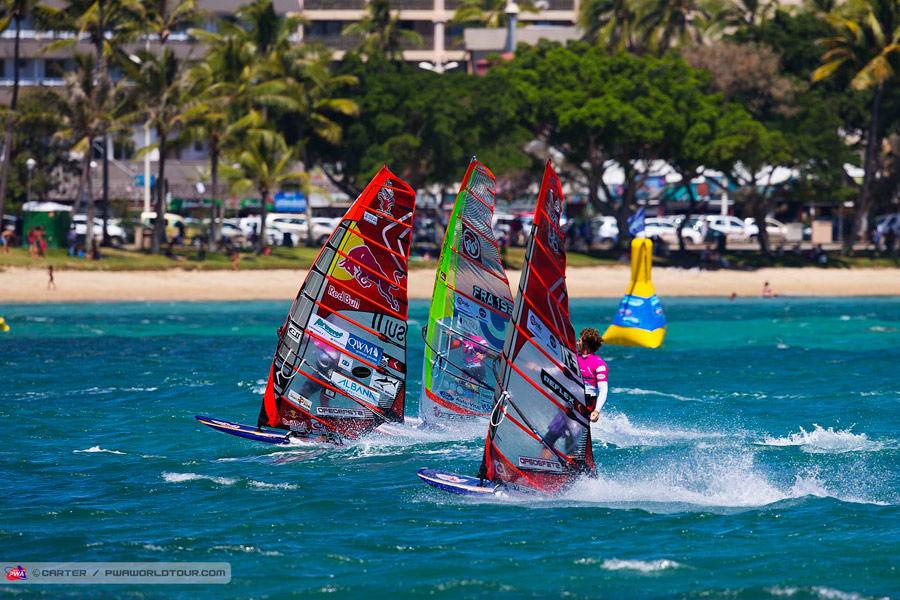 Cyril just misses out to qualify for the winners final (Pic:PWA/Carter) 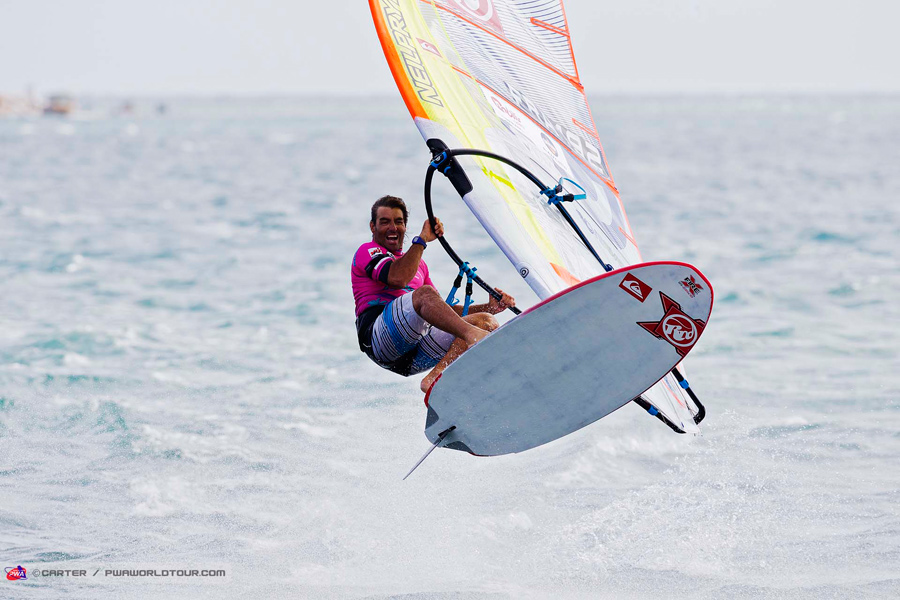 Antoine Albeau with the victory leap at Noumea. He again is the best Slalom rider in the world (Pic:PWA/Carter)

4. Delphine Cousin dominates and is 2014 PWA Women Slalom World Champion
Delphine Cousin  won 7 out of 14 eliminations and her worst result was a 4th place. No premature starts, no big faults, just an excellent performance by the 23 year-old reigning World Champion. The Turkish slalom sailor Lena Erdil was trying to keep up with Delphine and won three eliminations. Lena impressed everyone during the windier races and won two eliminations. That’s perhaps a result of her speed training at Lüderitz. Sarah-Quita Offringa did not really find her normal racing rhythm in the beginning, then won 3 races, but had a massive catapult in elimination 7. 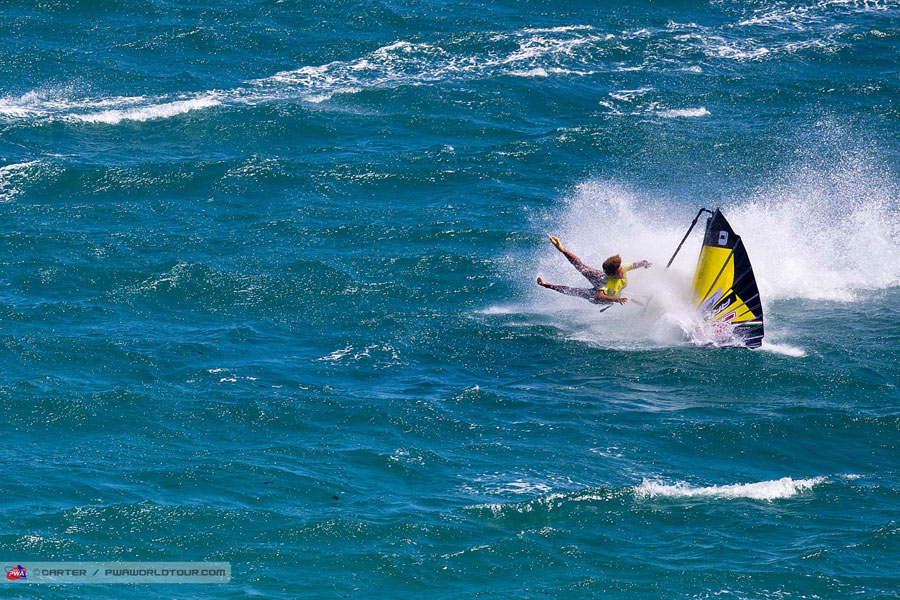 5. Youth power 2014
The strong young upcoming Slalom riders. Let’s start with the ladies Slalom fleet: all top three riders are relatively young. Delphine Cousin is 23, Lena Erdil 25 and Sarah-Quita Offringa 23. In the entire fleet are two other real youngsters. Fulyu Ünlü from Turkey and Océane Lescadieu from New Caledonia. Both are 18 years-old. Océane was the best ranked rider from New Caledonia at her home spot and best ranked newcomer of the event. Fulyu made it in 8th place overall, but did not attend the event at Noumea.

In the men’s category are several young riders, who definitely will compete for the PWA Overall title very soon. Frenchman Pierre Mortefon (25) already made it on the podium in the overall ranking of the season and won the first elimination at Noumea. Matteo Iachino (24) made it in 8th overall, Polish universal talent Maciek Rutkowski (22) made it in the top 16 overall. The biggest surprise in 2014 were Tristan “Legs” Algret (20), who finished in 17th at Noumea and 20th overall as the best placed youth rider and Frenchman Alexandre Cousin (25), who completed the season in 18th overall! Tristan won the PWA Youth world title. 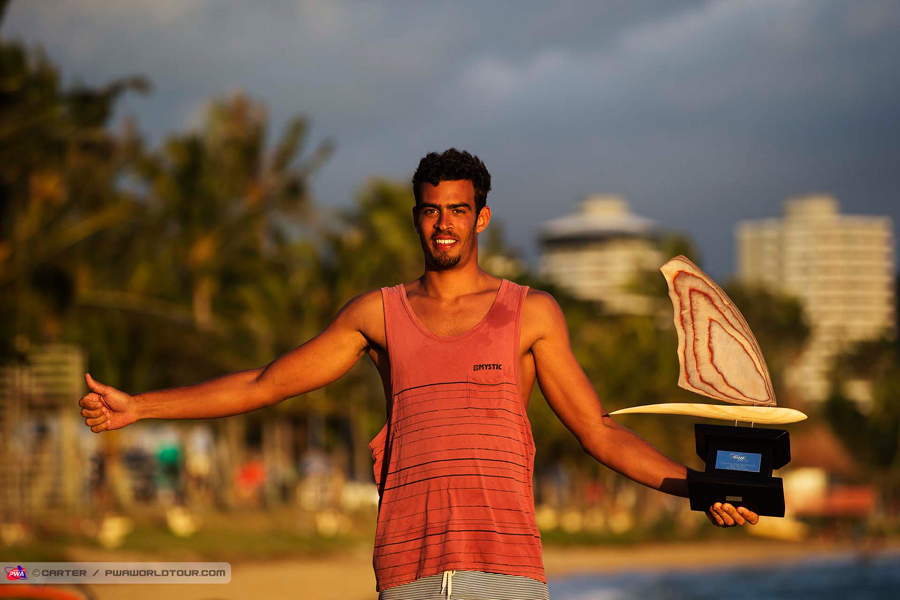 6. Old is gold
In the ladies category 42 year-old Valerie Ghibaudo made it in 3rd in the overall ranking. Respect. 41 year-old Japanese Ayako Suzuki finished the year in 6th.

And in the men’s category. Yeah, nothing to add about 42 year-old Albeau. He definitely is still gold. He was able to hold up against the younger riders, who are pushing hard. Arnon Dagan (37) climbed up the rankings from 14 to 7 compared to 2013.  Most of the older riders lost a bit of ground, but still were really competitive this season. Josh Angulo (39) slipped from 9 to 11, 44 year-old Micah Buzianis from 8 to 13 , Björn Dunkerbeck (45), who participated in his last PWA Slalom, from 13 to 14, PWA president Jimmy Diaz (46) – he is the oldest rider on tour – from 15 to 22. 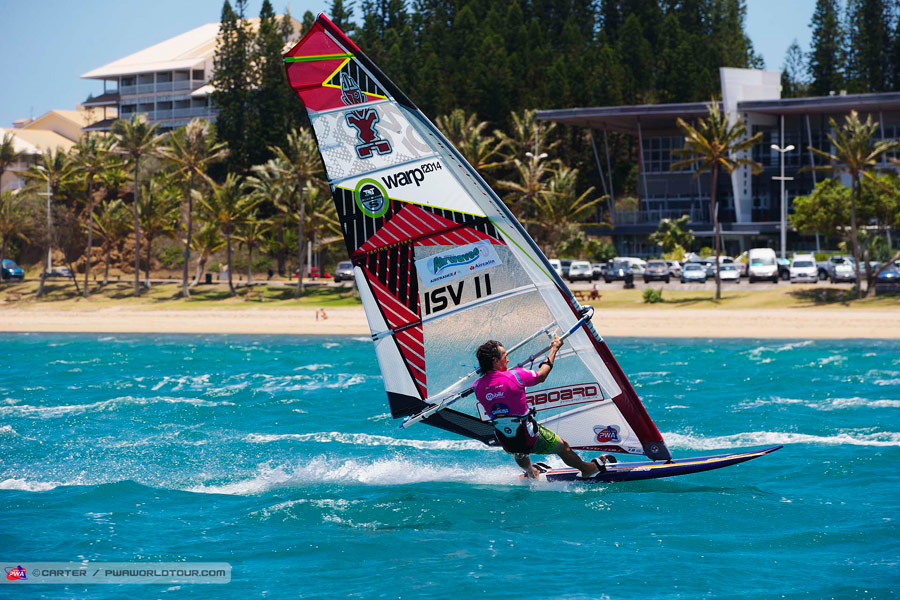 Jimmy Diaz, the president and actually oldest rider, who competes on the whole tour at the age of 46 (Pic: Carter/PWA)

7. Big names were missing
Ross Williams  (GBR-83) did not compete there, but kept his 10th place overall. Steve Allen (AUS-0) did not compete either and lost a few places and slipped out of the top 16. Steve Allen: “I had too many injuries this year affecting my results, so my ranking is not that great. It is also a very expensive trip where you need to be top 3 to not loose money. Great place, I love to compete there, I just hope they can get more price money and better conditions for the competitors to get more sailors there in the future. For me this event would be much better in the start of the season rather than so late.”  Just the top 24 get cash, the 10th men a bit more than 1100 €. It’s just for a few riders a win win situation, who get paid by the industry or have extra sponsors.

Only 21 of all men competitors in New Caledonia were regular PWA riders. The rest of the fleet were competitors, who did one event in 2014 and most of them were locals from New Caledonia or the Oceanic region. Who was not there? Jossin, Reuscher, Vonk, Yilmazer, Bouman, Lang, Malina, Marotti, Ferin, Larsen, Westera,… and some of the big names retired from the season earlier like Alberto Menegatti, Finian Maynard, Peter Volwater, Sylvain and Benoit Moussilmani, Gonzalo Costa Hoevel, Pieter Bijl or Kurosh Kiani. In the ladies fleet just seven international riders travelled to Noumea this year.

8. Kids race at Noumea
The PWA and the local organizers ran a kids elimination on the penultimate day. None of the participating kids were older than 16. They were racing on exactly the same course as their older idols. Unfortunately the two leading kids passed the finishing mark on the wrong side and 12 year old Thoma with his 32 kilogramms and a 3,6 m big Naish wave sail made it on the podium. Wow, respect! Would be great to see more

9. Local power
New Caledonia has a big windsurfing scene nowadays. A few years ago Laurent Gauzere or Colin Sifferlein were famous names in the ranks of international events. Current stars are Sarah Hauser or Antoine Albert. These days the Slalom scene obviously dominates the sport as the wind conditions are ideal. Noumea offers a huge lagoon. 5 women and 27 men from New Caledonia were competing in the PWA worldcup event. Fred Morin (NC-5), who was competing at many Slalom World Cups during his career, was the best placed local man in 19th overall. Fred made it three times into a losers final during the 9 eliminations. Well done! Sébastien Pouillet (NC-76) and Laurent Cali (NC-3), former Raceboarder and Olympic windsurfer, followed in 22nd and 23rd place. Océane Lescadieu (NC-815) was the best placed local female racer. Behind her were 4 other girls from New Caledonia. Océane has a bright future in front of her as she is just 18 years old.

Star guest Robert Teriitheau (46) finished his comeback event in 35th position. Not bad after many year of absence from the racing scene! 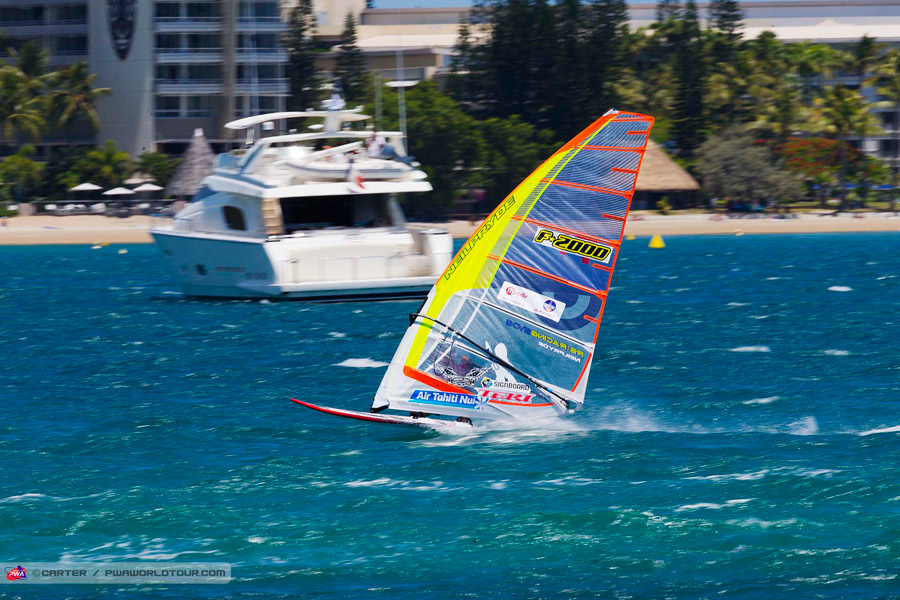 Robert Teriitehau, the living legend and star guest at Noumea, gave it all (Pic: Carter/PWA)

10. Björn Dunkerbeck’s final race on the PWA World Tour
Before his final race, Björn’s wish was a top 10 result. It didn’t work out as planned and he finished in 13th. However, Dunkerbeck made it 3 times into a winners final and finished his last PWA Slalom season in 14th position overall. In 2014 he was able to win one elimination at Costa Brava. Whilst the end to his PWA career on the water may not have gone to plan – he bowed out in style at the closing ceremony as he was presented with a lifetime achievement award for a career spanning 30 years and seen him win an incredible 41 world titles. Everyone from the PWA wished Björn Dunkerbeck all the best for the future. 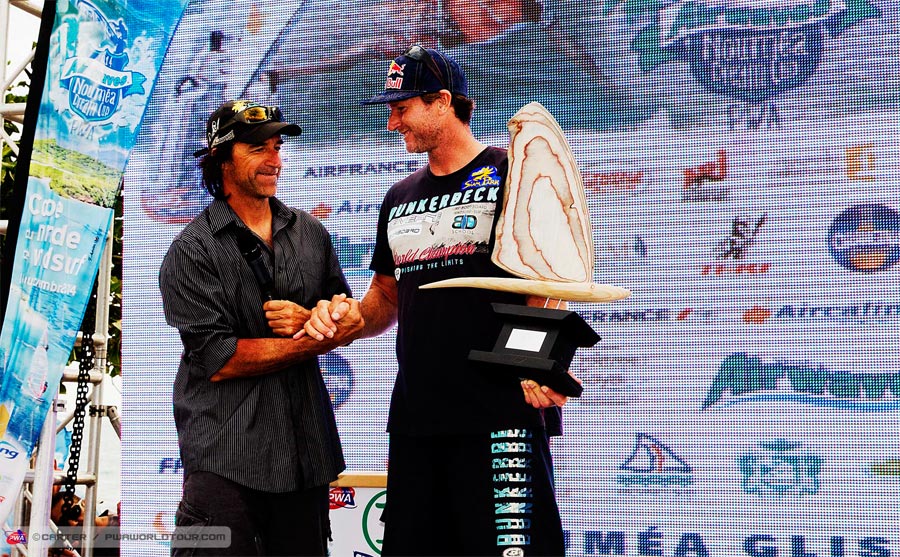 Bjoern received a lifetime award by the PWA on the final day at Noumea (Pic: Carter/PWA)

Thanks a lot Enes! This event definitely deserved such an article 🙂

Yeah Dan, you are right. Thanks for adding them! Both had a great season and both are worldclass windsurfers! Tristan is probably one of the young upcoming champs and Julien won in Alacati and finished 4th at Noumea.