Madagascar is one of the biggest islands on our planet and well known for its huge biodiversity and endemism. The island offers a few excellent windsurfing spots, which are located in the north nearby the city of Antsiranana or in the South at Lavanono. Several well known windsurfers travelled to Madagascar in the past like Andy Wolff, Klaas Voget, Thomas Traversa, Uli Hölz, Leon Jamaer or Graham Ezzy.
French Sylvain Bastide and his girlfriend Anais General travelled to Madagascar’s north in August 2019. On the best days the wind reached 30 – 40 knots and the waves were 3 meters high. They discovered the northwestern coast near Antsiranana. Emerald Sea & Sakalava Bay are the best spots. Both spots have waves, lagoons and clear blue, turquoise water.
Sylvain and Anais called their video “Vazaha”, a local word in Malagasy which means “stranger, Gringo or person with white skin.” The video doesn’t contain world class footage but shows the conditions quite well and the beaches and surrounding areas. Sylvain nails Back loops and rides waves together with Anais. The spots seem to be still jewels for windsurfers, who like starboard tack conditions and who love to explore foreign cultures and lifestyles. Guest houses are available. The costs for the flights will take a big part of the total travel budget.

“We stayed 20 days there, around 12 days at the Emerald Sea and 8 days at Sakalava. At Emerald Sea are no windsurfers except two teachers from Babaomby lodge. Not a lot of kitesurfers are in the waves. On many days I wished other people to come.
At Sakalava are a few kiters in the waves (beginner). We had 35 knots every day with 2.5m waves, but you can’t really see it on the video. It’s pretty hard to film. Sakalava is funny for jumping and less good for wave riding. At mid tide the waves are great. It’s way more easy to go to the wave spot. It needs 5 minutes.
The wave at Emerald Sea is really nice, easy and glassy (3 wave sets). You need to go for really short turns to hit the wave like in Pacasmayo. The spot is far from the beach. It needs to windsurf around 1 hour to make it to the waves. For me it’s better than Mauritius. You can try tricks and it’s quite big. It works at low and high tide. The people are very friendly, the food is amazing (better than in Mauritius ) and the landscape is so beautiful. It was one of my favorite trips. I would like to try Lavanono for the next year…   For the accommodation our lodge was cheap (15€/night), but the lunch and dinner were expensive (13€/meal). It’s possible to eat on the island close to the wave spot (fisherman) for around 7€.” (Sylvain Bastide told us about the trip to Madagascar)

Wave windsurfing at the north western coast of Madagascar 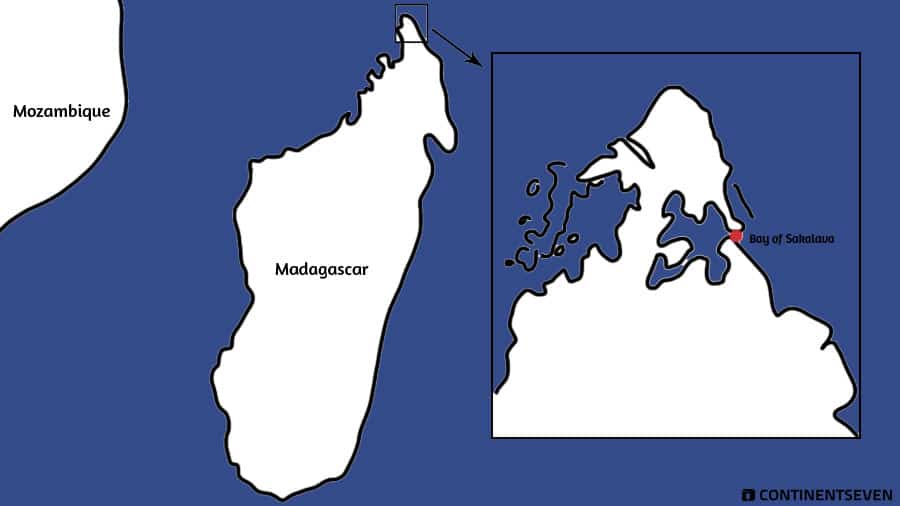 Great adventure!
How can food in so poor country be so expensive? Probably for better food you need to pay more…

Nice one, guys! Greetz from Hamburg!