Diamond Head local Scott Carvill, a windsurfing legend from Oahu, invited Robby Swift, Marcilio Browne and Ricardo Campello in September. They left Maui when there was absolutely no swell forecasted and decided to ride the famous summer spot Diamond Head, where Robby Naish landed his first big airs in the early 80s or where Josh Stone pushed his side shore port tack level in wave windsurfing to the max in the 90s. Several wave windsurfing competitions were held in the past.

The conditions weren’t easy with the westerly swell but Robby, Marcilio and Ricardo had a blast and landed nice Aerials.

I personally have a nice bucket list of places I would like to visit to windsurf when the conditions present themselves, many of which are difficult to get to at the moment, but some are very close to home here in Hawaii. The first and most obvious one away from Maui was Diamond Head, one of the most iconic windsurfing locations in the world, and actually home to most of the progressive wave sailing that went down before Ho’okipa somewhat stole its thunder.Robby Swift

Head high breaking waves allowed great jumps on the way out and perfect freestyle on the way in. Check out the highlights from day 2 in #Vieste #windsurfing @FPT_Windsurfing
https://www.continentseven.com/efpt-italy-vieste-2022-day-2/ 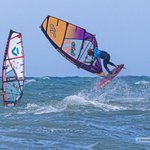 "It’s this rush of being at the edge of your comfort zone and the unique feeling in the bottom turn you get when riding waves like this that make it worth the risks.“ @DieterB35 New video: https://www.continentseven.com/windsurfing-tenerife-winter-swells-dieter-van-der-eyken/ 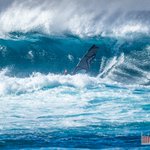