From the 29th until the 30th of January the Vietnam Fun Cup took place at Jibe´s Beach Club in Mui Ne, Vietnam. The windsurfers could compete in three different classes: In the men amateur class, the women amateur class and for the first time in a professional class. 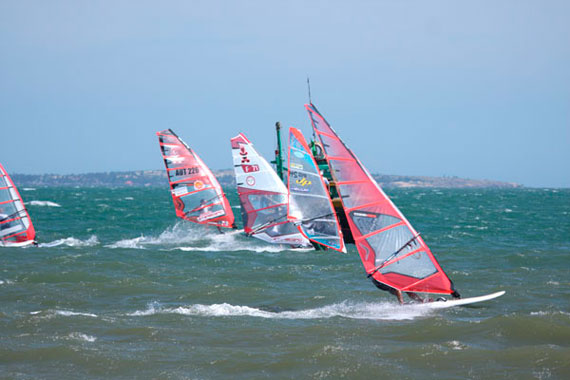 On the first day the north-east monsoon kicked in and blew with 12 to 30. The day started with a Pro-Race around midday. The racers had to sail a three jibes downwind course, which finished in front of the beach of the Full Moon resort. Jimmy Diaz could win the first two races in front of Cyril Moussilmani, who just received his 2010 Warp North sails the evening before. But in the third race Jimmy Diaz struggled in a jibe and could only place himsel in third place behind Cyril Moussilmani and Chris Pressler.

In the last Pro-Race the wind got stronger, blew with 30 knots. The racers were on their small 6,2 sails and on around 85 liter boards. Cyril Moussilmani got more and more confident with his new sails and won this race as well. 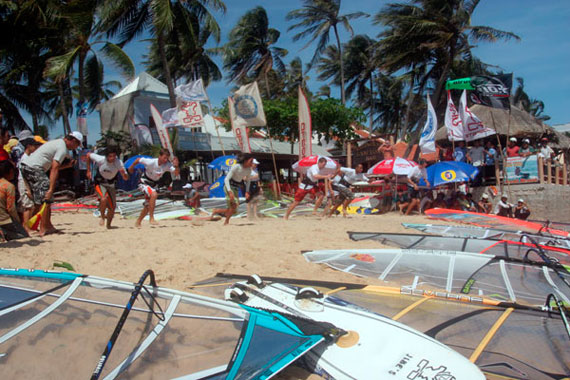 In between the Pro-Races the Amateur Men and Women races took place. The course was a figure 8 slalom with three jibes and a running start from the beach, which is not easy because of the breaking waves.

In the ladies it was Lucy Odillo Matter from Australia, who dominated the two women races in the strong wind. The 28 men amateur competitors did 8 races with 7 people per race until the Semi Finals.

On the second day again four Pro-Races were sailed in less strong wind conditions. The riders were on their 7 square meter sails. All four races had the same result. The French Cyril Moussilmani won all in front of Jimmy Diaz and Chris Pressler. Cyril Moussilmani has great speed and we can expect Cyril  fighting for the podium in the PWA races this year.

In the ladie´s amateur class the French Sylvie Fuerle found back her former speed and won two races. Because the last race counts, she won the event, although she was equal in points with the second Lucy Odillo Matter. On third place is Hsin Ee Chua from Singapore.

In the men´s class the Vietnamese Nguyen Quoc Hoa, managed to be the quickest around the three marks in the final race and won in front of Truong Ky Tien from Vietnam, who fell at one mark. Third place goes to Stephan Grammann from Germany.

The award ceremony started in the evening at Jibe’s Beach Club followed by traditional dances from Binh Thuan Province cultural department, a beach fire and a great BBQ buffet.

The French Pascal Lefebvre, organizer and owner of Jibe´s Beach Club stated: “For me the 11th Fun Cup was the best event we had here so far because the weather was great, the oganization gets better every year, Binh Thuan Province did a great job with all the media and of course it was the venue with some of the best riders here.
Jimmy Diaz, PWA chairman, was very impressed by the location and has a very positive view for having a PWA slalom and Freestyle event in 2011.”

More pictures from the second day:

Sylvie is happy to get back her title for the fourth time,