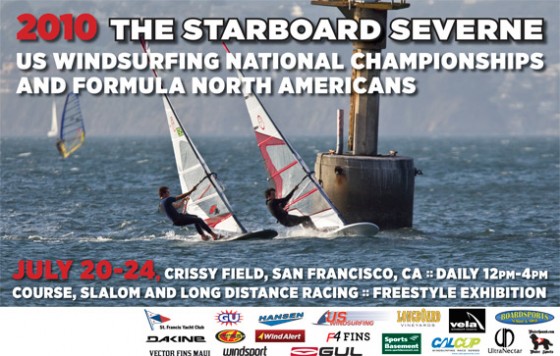 With strong steady winds, and the stunning backdrops of the Golden Gate Bridge & San Francisco skyline, the radical windsurfing action at this year’s event should be a feast for the eyes. While course racing and slalom racing are standard fare for ‘The Nationals’ this year’s organizers have also included Freestyle as an exhibition sport. With competitors throwing big jumps and wild aerial tricks spectators will be astonished to witness the progression windsurfing has experienced in the last few years. The Freestyle contest will also be held just off Crissy Field on Friday July 23rd and Satuday July 24th.

The prestigious St. Francis Yacht Club hosts this year’s event and competitors & spectators alike should expect racing at the highest level. Amongst the confirmed competitors are multiple past World and National Champions from across South America, Europe and beyond . Course racing will be featured in the heart of San Francisco Bay while the high speed and explosive crashes that make up Slalom racing will again be run just off San Francisco Crissy Field’s East Beach. The event also features a long distance race that sends the sailors on a 20 mile tour across San Francisco Bay. One component that makes this event so special is the fact that registration to race is open to all. Top Pro’s will be lining up against ordinary Joes. Race organizers have even coordinated a reduced entry fee for competitors who only want to race slalom or compete in freestyle or even both without competing in the Course Racing discipline. So if you ever wanted to line up with some of the world’s best windsurfers this is your best chance. The Freestyle Competition even has an “old school” division that limits the tricks to carving and straight aerials. Charter Gear is also available for those wishing to travel light to the event.

Woh I love your posts , saved to favorites ! .