We wanted to know more about their life and daily grind in South Africa and if they are still friends after 10 weeks living together in South Africa. So, enjoy watching the video but make sure to read our interview, too.

“TRY HARDER STANDS FOR THE ENDLESS ATTEMPT TO FULFIL THE EXPECTATIONS BUT FAIL BECAUSE OF OUR OWN DESIRE TO MAKE IT GREAT.”

Continentseven: Balz, what does your latest movie „tryharder“ stand for?

Balz Müller: For the endless attempt to fulfil the expectations, but fail because of our own desire to make it great. And for sure try harder is our freestylers life devise. I mean practicing or learning new moves is our daily mission, but sometimes you feel like you are trying hard but going nowhere! And those words also fit perfect to the support we freestylers feel from the windsurfing industry.

Continentseven: How many weeks did you spend in South Africa?

Balz: It felt like one or two but added together it was a ten week trip full of daily action.

Continentseven: Any injuries and broken gear? Honestly how many boards did you break?

Balz: There was a lot of potential but touch wood no bad injuries. One double attempt was horrible as I went headfirst through my brand-new wavesail (fifth tack sailed on it). About the board I only took one 93l freestyler with me so I cared him like a baby. And even my Ferrari (renamed after his rails got sprayed red) was cracked on both railsides Yentel’s superglue board repair saved my whole trip. Hehe. 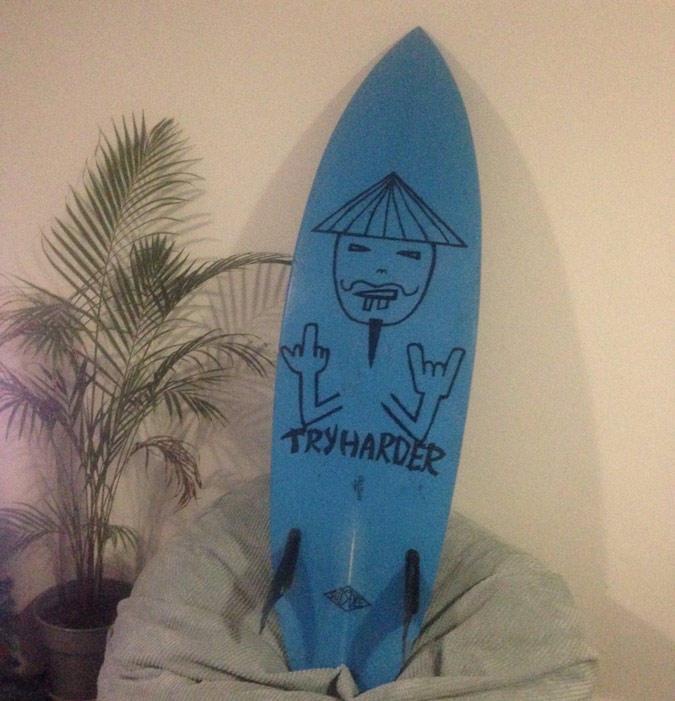 Continentseven: Looks like you two spent a lot of time together? After so many weeks, honestly were you two getting on each other’s nerves or do you love each other like an old married couple?

Balz: There were some moments we got very close, once surfing the Longbeach shorebreak we crossed our lines and drove over each other ended up washed up the beach in front of laughing locals with a big hole in Nic’s new surfboard, he almost killed me. But in the end his board got a professional repair and resprayed it even looked better than before.

Nic: I think the only times we pissed each other off was when we were hungover, in the end we didn’t bother fighting as we were too dazed and confused. All was good after a few minutes and we were enjoying the west coast to the max, usually with JJW and Jibi Jackson. For sure I was mad at him though for stealing my shore break barrel in long beach and running me over. But he bought me a Mcfeast that I didn’t want to make up for it though.

Continentseven: Balz, tell us one bad and good habit about Nic?

BM: hmmm only one?! after a MacDonald visit his farts smelled for weeks like that nasty MacFeast Burger. He likes Kitechicks, and yeah he makes great pancakes even at 4AM after a wild party.

Continentseven: Nic, and what about Balz?

Nic: Second that on the mcfeast, there was for sure more inside than just the burger. Good habbit…. He doesn’t shower much so it helped towards the water crisis. 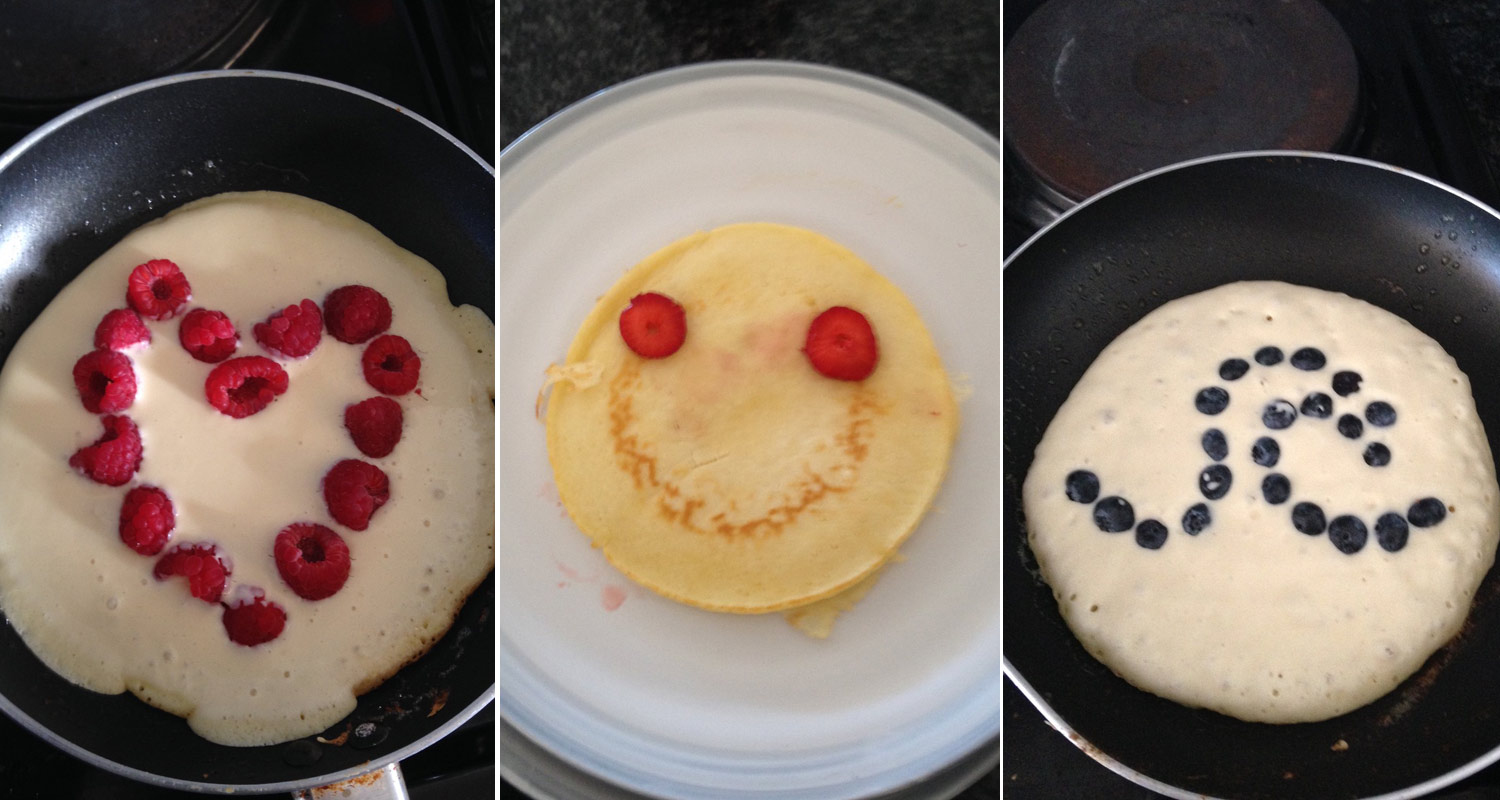 Continentseven: Balz, your are pushing really hard to land new moves and make freestyle look so radical. And you crash pretty hard too. Are you completely free of fear?

Balz: Sure I’ve got fear like all other humans, but maybe sometimes my motivation gets bigger than the good sense.

Continentseven: What are the latest move creations you are working on? The Shaka Skipper looks rad and it seems like you will go for double Push loops and Shifty into Forward?

Balz: Bhuu the Shaka-Tucanskipper is a real mindfucker. Needs so much commitment to kick you’re board upwind when your just above it. My main goal is still to make a triple windsurf rotation happen. And the Pasko into Shifty720 seems for me the easiest way to land it soon, although the triple Air Culo is coming as well, just with way less control.

Continentseven: What was your most used gear set? Did you touch sails bigger than 5 meters?

Balz: Think thats for sure a great topic of training in South Africa. There’s such a wide windspectrum that you won’t get used to only one sailsize. But for sure my 4.4 and 4.8 are the one with the biggest wear.

Nic: I actually held onto 4.8 and 100L as long as I could even when it was a bit too hard core for freestyle, Rig big to go big. Jumping I was on 80L and 4.4 pretty much the whole time.

Continentseven: Nic, you were 19th on tour in 2016. What’s possible after this long stay in South Africa? Most of your moves are extremely clean and fully planned.

Nic: I’m pretty happy with 2016, I made a lot of building blocks working towards where I really want to be. Definitely proud to make the cut for Tabou/GA, that’s always something I’ve dreamed of being a part of since a little kid. My goal this year, in terms of comps, is to put together some proper heats that show what I can do. I also want to make a few clips from where I live at home to showcase the south coast, when it does switch on (which seems to be rare recently). It really is a fun place to be. 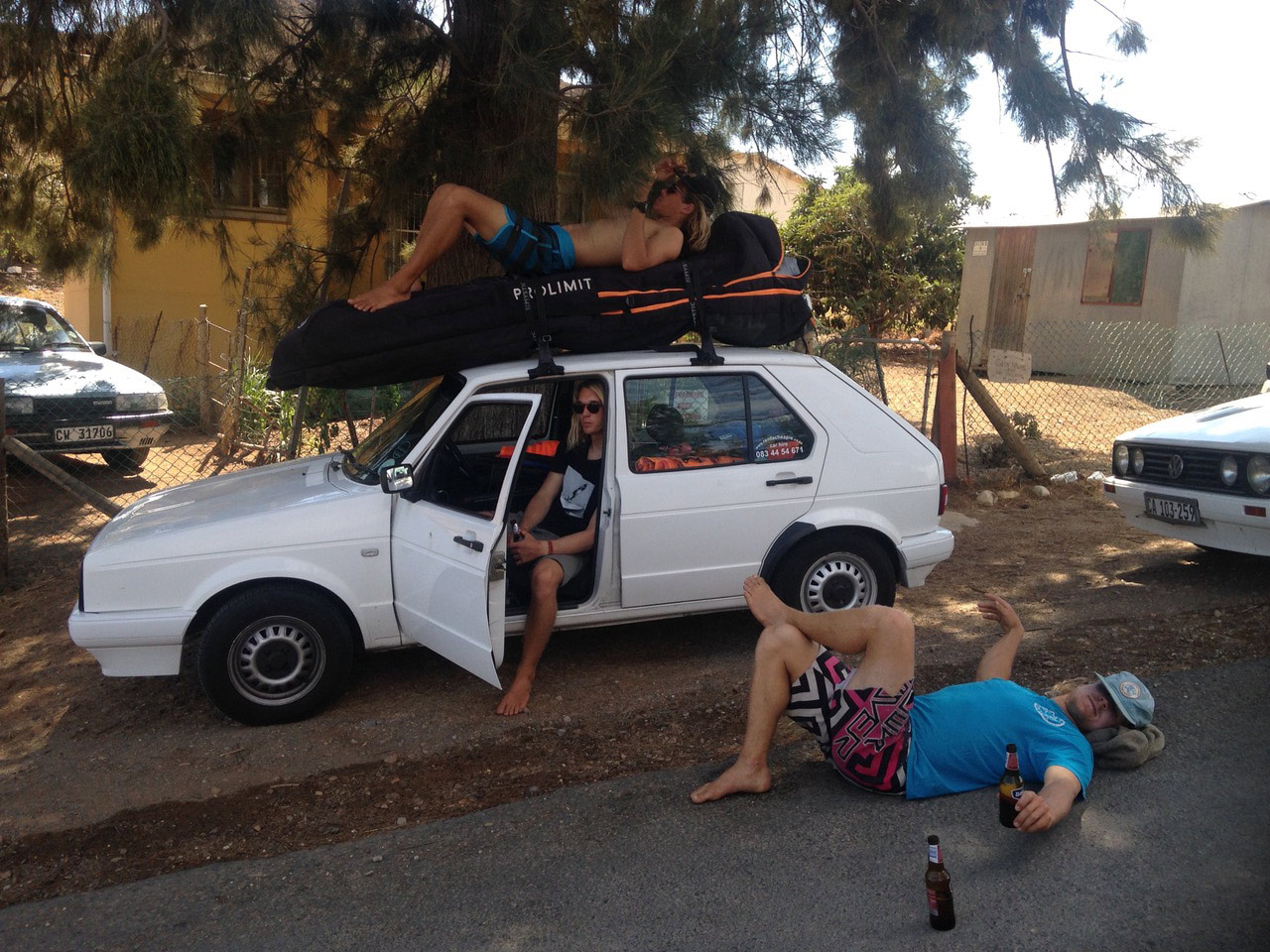 Continentseven: Balz, do you have any goals for the events?

Balz: Having a good time and hopefully freestyling in great condition with all the other dudes.

Continentseven: In South Africa did you practice heats or were you just pure free sailing?

Nic: We are definitely putting the work in for sure, but making sure fun boarding is still fun.

Continentseven: Balz, your wave riding looks better and better and your jumps are massive. When will you start your wave career?

Balz: I feel like to gather more experience in riding and optimizing my doubles and push forwards because that’s all you need to get in the profield nowadays. But consideration a lot of the wave stars nowadays been really good freestylers in their childhood, I think its the best education to keep your freestyle level growing. But for sure I’m missing no more wave session instead of a choppy freestyle fight.

Continentseven: And what’s about you Nic. Did you make it into the waves a lot this winter and is wave riding something you like?

Nic: Yeah we sailed a lot in the waves as well, I actually had never sailed port tack riding properly so there was a lot to learn. In the end I managed to make some kooky turns and jumps. It’s definitely something I really enjoy and am currently working on. If the waves are pumping I’d rather be surfing though.

Continentseven: No wind, no problem for you guys. Skate boarding, surfing and what else?

Balz: I love surfing, sometimes I even enjoy it more than windsurfing. It’s so simple, grab a board and suit and afew min later you rip the first wave and once you fall you chill and the board pops back to you due the leash. If there’s no waves and wind skate boarding is for sure my hidden passion, specially riding bowl is tons of fun although every crash is fucking painful. Round off the day with a pancakeparty and you live the dream.

Nic: Surfing is something I really like to do along with skating, both which complement movements in windsurfing. I like the limitless creativity of these ‘sports’. 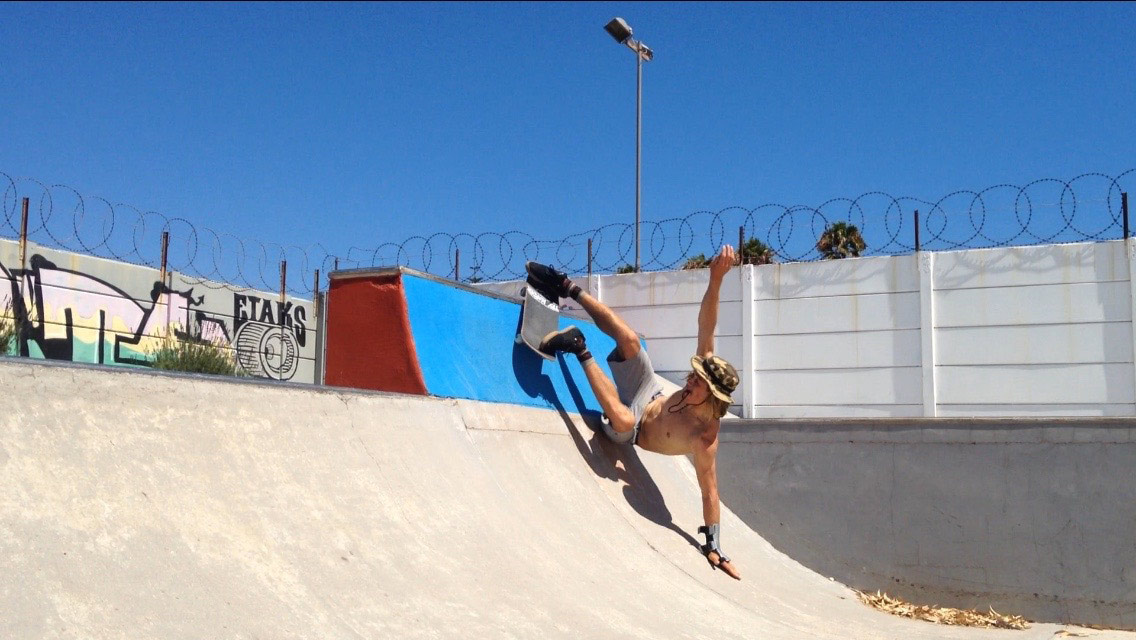 Continentseven: You drove a lot in South Africa. It’s quite a distance in between Cape Town and Brandvlei for instance. How did you spend your time in the car?

Nic: Some days I slept, some honked with the honker, we almost crashed quite frequently because Balz would trip if he thought we could windsurf somewhere new or if he saw a gust over 10 knots, his eyes drifted off the road pretty easily. We jammed a lot different kinds of music and soaked in the scenery of beautiful Cape Town.

Continentseven: Do you like the same music?
Balz: Think we pretty much get along with each others favorites.
Nic: I love rock for getting alert before a session or reggae to cruise home after a long surfday. Hip Hop also vibes good while tripping specially in a VWgolf mark2.

Continentseven: Cutting hair with a knife. That’s quite wild? An English technique or Swiss precision?

Balz: More Caribbean pirate style.
Nic: Improvising with what we had!

Continentseven: Which spots are in the video?

Balz: Starting from the classic Rietvlei flatwater action over to Tableview/ Bigbay wave fun. And some roadtrips downsouth to Muizenberg and Sandvlei or Brandvlei in the Cape mountains.
Nic: Flo’s pancake paradise

Continentseven: What was your best session?

Balz: For me it was that late season southeast storm in Table View where we had easy masthigh sets and fullpower in my 4.2 wavesail. That day I probably had some of the biggest rocket airs in my life and some nasty wipeouts as well (next day my left side was blue all the way). But what made that day so memorable was the lill downwinder I decided to do as I didn’t want to rerig. Heading out all along trying to sail downwind in those big watermountains with flying water on top of it made me feel really small and stoked to return safe back to the shore.

Nic: Hard to put a pin on it, the last session we had at Rietvlei was probably the most special for me. It was the last SE we had on the forecast for the season just before we flew home. We went after hours and had the best power hour of the trip during golden hour on the uncrowded lake. The vibe between us all on the water was so raw and alive it just wrapped up the time we spent there perfectly and reiterated how lucky we were to have all of that on our door step for 3 months.

Balz: Landscaping, digging two months for money and then chasing hungry the canary passatwind in the summer months.
Nic: Currently working towards summer in the Canary Islands hoping to catch some sessions back home in the meantime. Hopefully I will score some good swells in the west as well.

Really liked the vid! The passion, the creativity, the diversity and goofiness combined just show you how much these guys love this lifestyle. I also dig the music as it combines a lil bit of everything. First song was nuts and second one by Thee Oh Sees ripped my mind. Keep up the good vibes and keep up with uploading such great content. Rad respect!

Stoked to hear, thanks alot !!

Soooooo progressive!! Kind of a modern age double or nothing movie. Love it in all its trashiness!

Why so many freestylers use booties on they feets while the weather is warm?

Maybe to stabilize their ankles some or to prevent cuts from urchins and rocks, I dunno

Probably on of the best real windsurfing videos of the last time! The editing is superb, away from those fancy instragram-like filters and with real background music. Add a Rick and Morty references, and you have it all.
Congrats crazy boys.