Interview with Tom Hartmann about the FWC 2011

Tom Hartman (AUT-44) is known as one of the best Austrian wave sailors, who travels around the globe to catch the best waves and stays several weeks a year at Mauritius, Indian Ocean. For 2011 he decided to compete for the first time at the Fuerteventura Wave Classic. Tom has around 100 kg, is very tall and definitely needs some wind to get going. The international Naish team rider brought bigger boards and sails to the island of Fuerteventura to be able to sail in the lightest wind already. Out of an tactical view he knows a lot working as the race director for EFPT event over the last years. This fact could help him to perform excellent at the this years FWC. Read what Tom thinks and expects from the Fuerte Wave Classic event 2011. 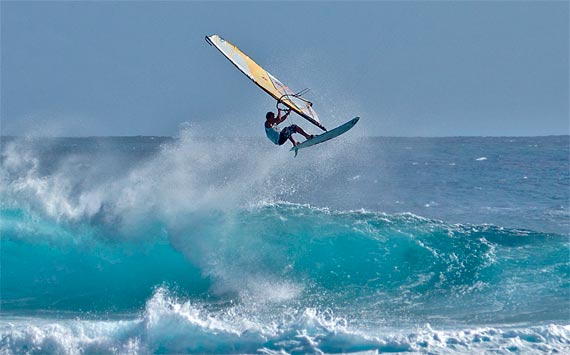 FWC: It is your first time competing at the Fuerteventura Wave Classic. What do you think about the event and why did you choose this one to take part?

Tom Hartmann: Yes, it is my first time competing at the Fuerte Wave Classic. I have been following the FWC reports with high interest during the last 2 years as well as the other wave classic events, because it has shown windsurfing in its most radical aspect. I prefer wave sailing in the down-the-line conditions and also like the competition format of the FWC. It is the perfect setup for solid action and will bring on a great show again. 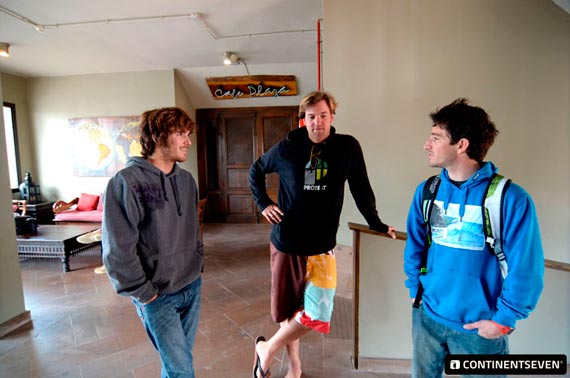 Tom in a talk with Thomas Traversa and JB Caste (Pic: continentseven.com).

FWC: Do you know how the conditions can look like at the North Shore of Fuerteventura. Are you prepared for big waves? And how did you prepare or how was your winter so far?

Tom Hartmann: I haven`t sailed at the North Shore of Fuerteventura yet, which is a little disadvantage compared to some of the other riders, who know those spots very well. But I think when it gets big there, it can be similar down-the-line riding to what I am used to sail in Mauritius, where I spent a lot of time training. I like the excitement of riding big waves and scored some good days in Mauritius, Madagascar and Western Australia during the last months, so I feel quite prepared for Fuerteventura, I think. 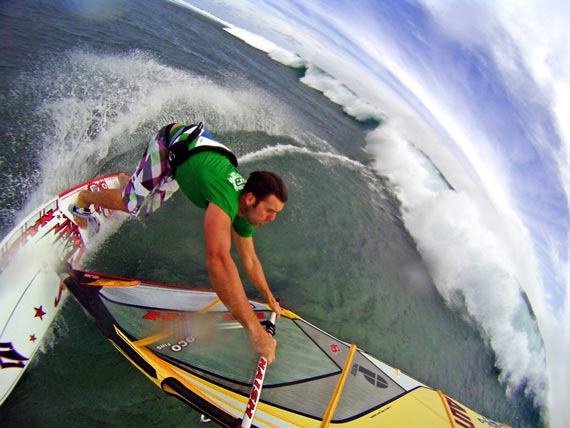 Tom had some good preparation in the break of One Eye on Mauritius.

Watch Tom sailing in Mauritius, at One Eye, when the swell got really big in 2008!

FWC: In spring 2009 you had a bad crash while Slalom sailing at Lake Neusiedl and injured your shoulder. You were off the water for a while. Are you 100% fit again?

Tom Hartmann: Unfortunately it was quite a bad injury and I had to do a surgery, which got me some kevlar strings and small titanium plates into my shoulder. The whole thing kept me out of the water for about 5 months, but I tried to do a lot of physiotherapy and get as ready as possible to be back on a board. After that windsurfing break in 2009, I was travelling and sailing a lot in different spots last year and feel pretty confident with my shoulder again. I wouldn`t say it is 100% like it was before, but I don`t feel any limitations when being on the water right now. 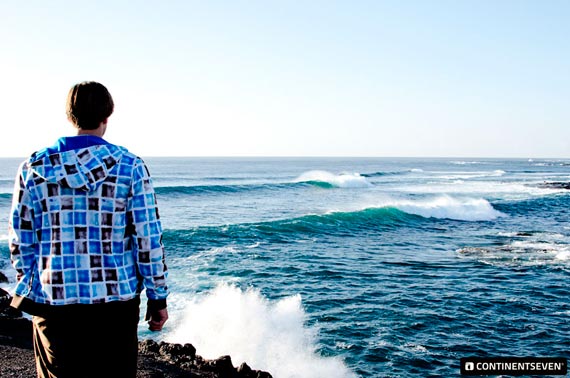 Wave check at Puertito in the first days of the FWC event (Pic: continentseven.com).

FWC: Which gear did you bring?

Tom Hartmann: I brougt my 95l Naish Pro Wave Single Fin for lighter wind and bigger waves and my Naish Wave87 Thruster Fins for windy days. For the sails I brought my Naish Forces 4.5-5.7. I put some spare masts in my quiver, too, which could be a good backup and a surfboard or SUP for windless days, too. 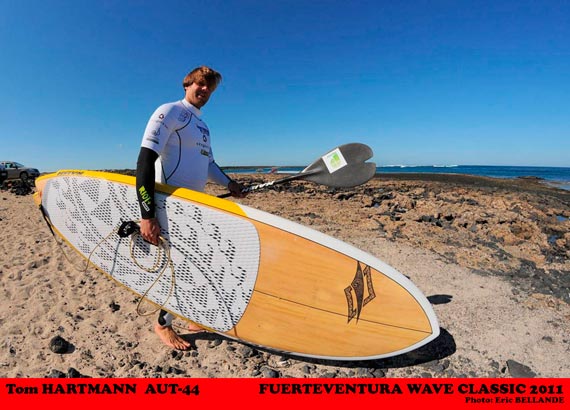 Getting out to the break of Majanicho with the SUP (Pic: FWC, Eric Bellande 2011).

FWC: What do you expect from the event?

Tom Hartmann: I hope we are lucky and catch some good conditions on Fuerteventuras North Shore. I know it’s a competition and somebody will take the win, but I think it will also be a good teamwork between the riders, the organization, the media crew and everybody else involved to produce great photo and video footage and an image of our sport that shows how spectacular windsurfing is. 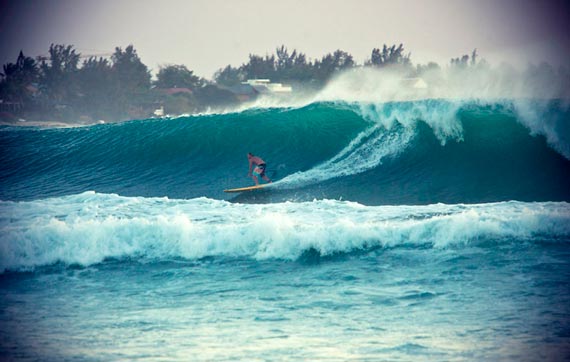 On the SUP on Mauritius – Pic: Flora Bikich