After a week of “disappointingly gorgeous” weather period the top windsurfers competing in the Skykon Tiree Wave Classic 2010 finally saw some action on the water on Friday, when the long-awaited wind and waves materialised. Number one seed and current number 14 on the PWA wave ranking 2010, Ben Proffitt, secured first place in challenging, technical conditions at Balephuil Bay on the south westerly tip of the isolated Hebridean island Tiree. 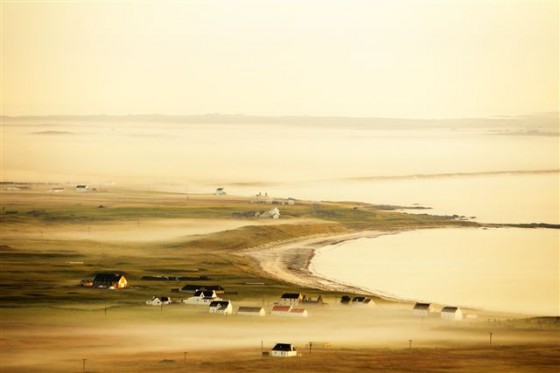 “It feels great to have finally got out on the water after a week of waiting, and win the event,” Proffitt said. 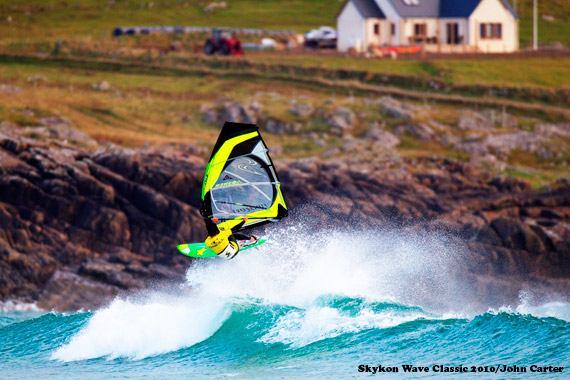 Freestyler Andy ‘Bubble’ Chambers, who finished in an unexpected second place ahead of John Skye, said he was “very happy” with his result. “I’m a freestyler rather than a wave sailor so I’m definitely happy with my result today,” he said, noting that it had proved tough to pick the right wave in the conditions. “But after a week of waiting for the surf to arrive we were all itching to get out,” he added. 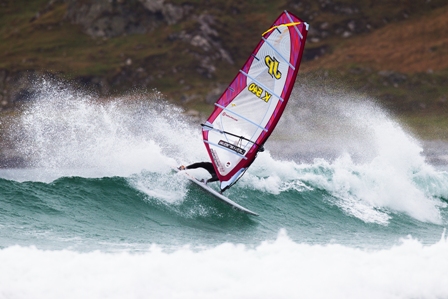 John Skye, second best placed UK sailor on the PWA tour – he is ranked 11th – took the third podium spot. John said that he was also relieved to have finally got the conditions to compete on the final day of the Tiree Wave Classic 2010. “I prefer bigger waves but Ben and Bubble were really ripping today, and they both deserve their results,” Skye said.

The moderate to fresh north westerly breeze produced “small and clean” conditions for the 20-minute heats, according to Head Judge Duncan Coombs. “It was pretty challenging for the guys out there today but everyone was relieved to get out after waiting for the best part of a week,” he said. “The conditions were average but it was enough to show the true winner,” he added. 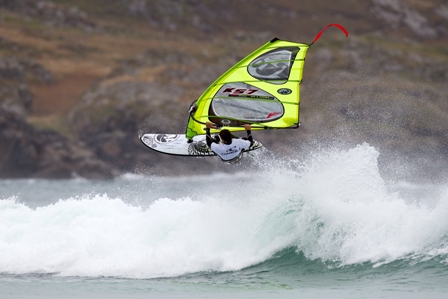 In the amateur category, Scotland’s Scotty McDowell finished in first position ahead of Adam Sims and Jim Brooks-Dowsett. Russ Jenkins took first in the masters category, followed by Craig Hamilton in second and Mark Lloyd in third.

Last Saturday, on the first day of the Tiree Wave Classic 2010, newcomer Debbie Kennedy from Hayle in Cornwall took the women’s title for the event, with fellow Cornish entrant Jodie Ward finishing in second place. Helen Bainbridge finished in third in a light onshore breeze.

The isolated Hebridean island has experienced an unseasonal stint of balmy weather during this year’s Tiree Wave Classic and the wave sailors have had to wait it out until the last day of the contest for the chance to compete. Much of the week has been occupied with beach volleyball, five-a-side football and rounders in the blazing sun organised by volunteers from Telford College in Edinburgh in the absence of the all-important wind and waves.

Glasgow-based band, The Fortunate Sons, played for the competitors and locals at the Skykon Tiree Wave Classic 2010 prize giving ceremony on Friday night at the packed An’ Talla community hall. On Monday, up and coming singer Carrie Mac flew in to perform an intimate acoustic set for the frustrated windsurfers at the Tiree Lodge Hotel. Check the link and listen to some songs.

With the final event of the season coming up in Cornwall from 28 to 31 October, British Wavesailing Association Chairman, Nigel Treacy, said: “Several big names took the decision to not attend the Skykon Tiree Wave Classic this year due to the forecast. It takes a brave sailor to gamble on a windless seven days on the UK’s windiest isle and those that made the trip were rewarded for their efforts. The result has shaken up the BWA Championship table considerably leaving the field very open, especially for the top five places. As a result, we could see some new names on 2010 Championship trophies.”

Yes you are right Coombs, but Robby Swift is 6th in the moment. SO Robby is the top ranked UK wave sailor on the PWA tour right now!