Day 3 of the 2021 Tiberias PWA World Cup proved to be the most exciting yet as the fins tried to battle back against the foils in the men’s, whilst a couple of new faces claimed their maiden bullets on the world tour in the women’s. The forecast had predicted similar conditions to yesterday, but that wasn’t the case with the wind machine turning up an extra notch to make for some thrilling racing with winds gusting well over 25 knots.

Nicolas Goyard continues to steal the show in Israel as the 25-year-old maintains his perfect record at the end of Day 3. Not only has the Frenchman won all 4 eliminations completed so far, but he has also won every heat he has sailed, such has been his dominance. However, today the reigning Foil world champion was given his sternest test yet, particularly by Matteo Iachino, who threw everything he had at Goyard in the quarters, semis and final of Elimination 4, in what proved to be a real grudge match between fin and foil. With neither man willing to give in, even in the qualifying rounds, it proved for thrilling viewing with the lead often changing hands. Ultimately, however, the transition speed of Goyard proved to be the difference as the efficiency of the foil again showed its hand. However, on another day with the right gust, or perhaps if it could get even windier, then we could see the fins back on top as Iachino chased Goyard all the way to the line in the last elimination of the day.

Sarah-Quita Offringa started the day with a perfect record, but an uncharacteristic mistake at the first buoy in elimination 3 sees the Aruban lose the event lead to Marion Mortefon. However, after the next elimination, the discard comes into play, which will change the ranking.
Day 3 was the day for the UK sailor Sarah Jackson, who won her first elimination on the world tour. The 23-year-old has spent the last year training at home in Hayling Island, with former world tour legend Nik Baker acting as a mentor, and it is clearly paying dividends. Jackson started the event with her best result to date at that point – 4th – but went a few places better today and it didn’t look like a fluke. Jackson pinged the start and then showed more than enough straight-line speed to hold off a stern challenge from Cousin Questel entering the first, once safely round she looked determined to not let the opportunity slip through her grasp. After an understandably slightly stiff gybe at the last, Jackson, was then made to sweat it out as the wind dropped on the final reach meaning she had to pump for the line. Fist clenches and a few tears soon followed as the Brit claimed an emotional first win, which puts her in real contention for a shot at the podium come the end of the event.

Women’s Foil
Two years ago – Helle Oppedal (Fanatic / Duotone) – finished 5th overall on the Foil PWA World Tour at just 17-years-old. Fast forward to today and the 19-year-old is celebrating her first bullet on the world tour after a quite brilliant performance in the second elimination, in which she showed tremendous straight-line speed and smooth gybes to power to a memorable first win, which won’t be her last if today’s performance is anything to go by. The young Norwegian started the day in 6th, but rises into 3rd at the end of play.

The wind is back and so are the whales 🐋 Waves have been glassy for the whole start of the year so it’s fun to grab my windsurfer and ride the wind with waves again! Thanks for the insane gear @goyawindsurfing @quatromaui 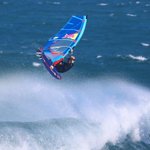 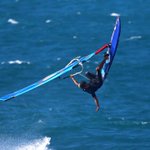 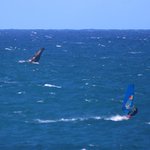 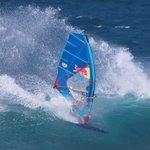 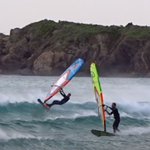 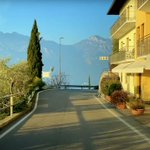 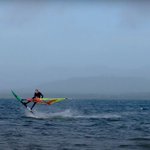