The first round of the Rip Curl Windsurfing Pro Tour wave event was a big success. The best French wave riders battled for the podium. In the end, after a challenging weekend at L’Ile aux Vaches, Brittany, Thomas Traversa took the victory. His good friend JB Caste made it in 2nd and local and designer for AHD Bruno Andre completed the podium in third position. Local Robin Goffinet finished in 4th. The event at Ile aux Vaches saw 28 heats with more than  8 hours of competition.

The next events will be held in the Mediterranean Sea, at Carro near Marseille or at Ile Rousse on Corsica. April is a great month for strong wind and excellent waves in the Mediterranean Sea. In total are 7 events planned. Hossegor, Corsica, Carro, Crozon, Toulhars and Ille aux Vaches are the possible event locations to run 6 more events.

Thomas Traversa near the lip

Thomas Traversa with a cutback at Cap Sizun

Bruno Andre with a powerful Aerial off the lip

Robin Goffinet rides a big one

On March 22nd and 23rd the first stop of the RipCurl Windsurfing Pro Tour 2014 was held at L’Ile aux Vaches, Baie d’Audierne, Brittany with most of the top French wave sailors competing. 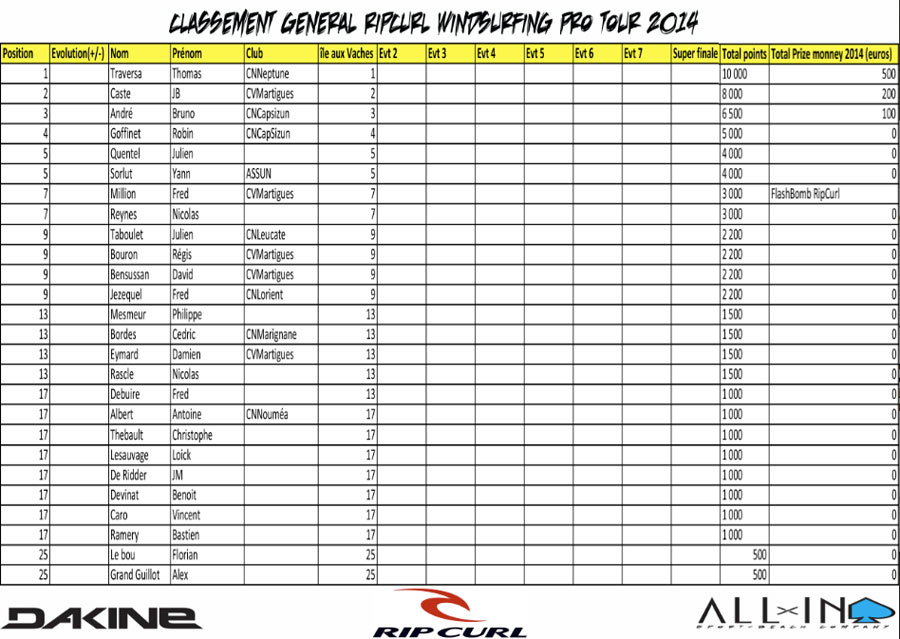 On Saturday the competition saw great conditions with 25  to 30 knots off shore wind and waves up to 4 m in starboard tack at L’Ile aux Vaches, which is located in between Audierne, Brittany and Point du Raz. The spot is well known for surfing, but works well for windsurfing with offshore wind conditions.

The riders met at 9.00 am and the conditions were on. Thomas Traversa, Julien Quentel, Bruno Andre, JB Caste, Yann Sorlut and Nicolas Reynes made it up into the semi finals. Regis Bouron, Robin Goffinet and Fred Million were battling for the two remaining spots. 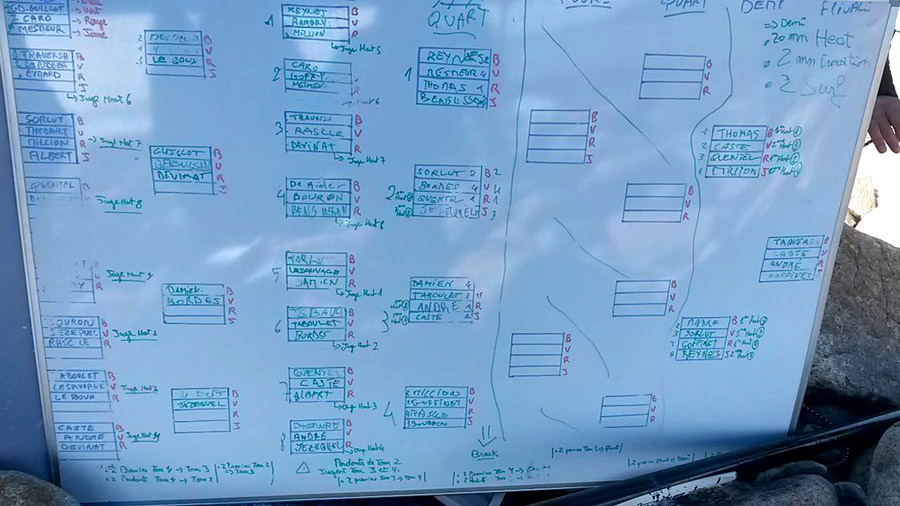 The full heat board

On Sunday the wind dropped to light 10 -15 knots, but the wwell was still there  with 2- 3 m high glassy waves. A pure wave riding day! Thomas Traversa , Julien Quentel, Fred Million and JB Caste met in the first semi final. Thomas and JB  made it into the final.

The second semi final saw Bruno Andre, Robin Goffinet, Yann Sorlut and Nicolas Reynes. Local Robin Goffinet, who made it to the semis like Fred Million, took advantage of the good wave knowledge, same as Andre Bruno. Both locals made it into the top 4 final.

The judges decided to run a 25 minute long final instead of 17 minutes length.

Both locals, Bruno and Robin were unlucky during the final. Bruno broke a mast and Robin got blocked on the inside in light wind conditions. In the end Thomas Traversa took the victory and JB Caste finished in 2nd.