The truth about the Fuerteventura Wave Classic 2010 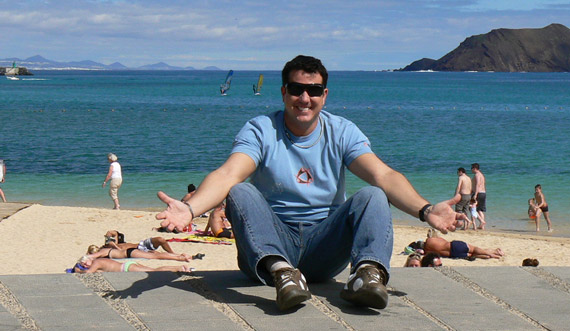 Orlando Lavendero on a calm day at Fuerteventura´s North Shore

C7: The second edition of the Fuerte Wave Classic is coming closer. Is everything already set for the event and how does the organisation run?

Orlando: Hi, yes it is true we are almost  at the beginning of the second edition of the FWC. All major issues are under control, we have the hotel for the pro riders organized and ready, we have the same jet ski rescue team as last year, lycras are on their way, the videographer and the photographer are confirmed,.etc So I think that we have everything going ok, but as you know, during the last two weeks before an event you always find little bits and pieces to do and prepare, but we are a strong team and I am confident that everything is going to be ready.
With regards to the organisation, we are a main team of two here in Fuerte, my business partner Pierre Bracar and myself. Then we have the help of JB Caste and Thomas Traversa to invite and organise the list of riders and we  have hired Marion Raisi to do all the media communication. Pierre is in charge of the pure windsurfing part of the event, going every morning to check the spots, weather forecasts, etc.  Because he is a shaper, we will be offering a unique service to the pro riders with repairs on the spot to their boards so they can always be on the water. I am responsable for looking for sponsors, organising arrival of riders and other crews, relationships with local government authorities, marketing of the event, etc but as I said, we are a good team so we always cover pretty much everything between us.

C7: Can you please again describe the concept or the basic idea of the event?

Orlando: Well, the original idea started when we wanted to organise an event to promote our windsurfing rental center in Fuerteventura, then we joined forces with JB and Thomas, and over some coffees in a bar overlooking the shorebreak of El Cotillo, we discussed their ideas and in the end, the FWC concept was born. The event is based on an original idea from JB Caste and Thomas Traversa. Basically, the event involves a group of pro riders invited to the event and some local riders. Once in Fuerte the riders will be teamed up in teams of 4 or 5. The riders will judge temselves and between the riders and the local organisation, the best spots for the day will be chosen. The infrastructure is small and practical to allow moving from one spot to another and we will focus on pure wave sailing, good quality of photos and videos for the promotion of our sponsors, the riders themselves and on safety and rescue services for the riders. We have 30 minutes heats to allow for a good selection of waves and there are no eliminations, all riders sail throghout the whole event. At the end of the event there will be a winneing team and then, on the last night the riders will vote for the best rider of the event, best wave, etc. It is kind of an event with the relaxed atmosphere of a windsurfing trip amongst friends.

C7: What drives you to organize an event like this?
Orlando: Obviously my love for the sport is a key issue, also because Pierre here shares the same ideas and “obsession” with windsurfing. In addition to this, I have taken part in some events around the world and sometimes I think that things could be a little different and I try to organise an event to see what I could improve. However this is not always easy as you depend most of the time on sponsors to help you do a good job. But overall I say that what really drives me is to make the sport of windsurfing grow and promote my business.

C7: The event last year had unbelievable presscoverage, nice pictures, TV footage, magazine reports. What was the final outcome? Was is easier to organize the event this year or did you find more sponsors?
Orlando: We worked a lot on promotion and we were really lucky with the conditions. It is true that the images went around the world and I would say that the final outcome was to show the world that Fuerte is not only flat water sailing in Sotavento and that we have a great potential as a true wave sailing destination.
I honestly though that this year it would be much easier to find sponsors but unfortunatly it hasn´t been the case, you have to think that last year the 7th-wave center paid for a lot of the costs and it is difficult for us with a new business to do so. Maybe due to this world wide crisis and local economies doing bad it is normal to find difficulties, but it has been hard again. We are nonetheless lucky that our sponsors really believe in this project and have supported us and we can never thank them enough. 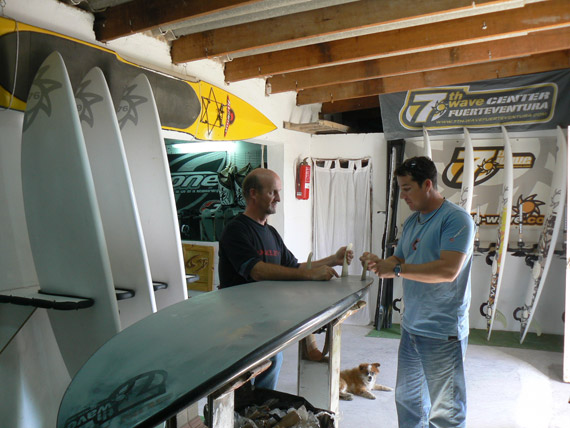 C7:  Did the windsurfing industry show any reaction?
Orlando: Well, I think there was a reaction about the conditions we had, the images and possibilities of Fuerteventura. There were also indirect reactions on websites, etc and some emails from brands and riders congratulating us on the event. But there hasn´t been any direct reaction from the windsurfing industry with regards to sponsoring or taking part in the event apart from the ones that have supported us from the beginning.

C7: Last year the Fuerte Wave Classic event, was included within the Wave Classic Tour. Now, the event on Fuerteventura  is not on the tourplan anymore. What is the reason for this?
Orlando: This has been a hot topic lately that I would like to clarify. The FWC has never been part of any Tour. Last year we employed a media manager to work in Fuerte during the event and he did a great job, but unfortunately  ideas were copied and he went off to do the same event in La Reunion. It is fair to say that the event is based  on JB and Thomas ideas also, and they took part in the event in La Reunion; but some ideas implemented on Fuerte such as the beach cleaning projects, how to do the teams, etc were just copied. We had been working on organising the FWC the same as last year when we heard about this. On one hand we are happy that because of what happened in the FWC other events are happening around the world and that is good for windsurfing in general, on the other hand the fact that a Tour has been created  using the same name, images from the FWC for its promotion etc, has caused some problems for us especially when the tour was presented to the same sponsors that we have in the FWC.
For this year we tried to solve things, but this tour now has rules that don´t coincide with the ideas here in the FWC and it is very expensive to “join”. So to clarify everything, we just want to say that the FWC is an independent event organized by windsurfers for windsurfers with open ideas and not part of any tour. In any case we want to wish good luck to this new Tour and good waves and wind for the good of the sport.

C7: How would you define the Fuerte Wave Classic event within all wave windsurfing events and how do you see your position towards the PWA?

Orlando: I would define the FWC as a innovative event due to the teams configuration and other different aspects. Without forgeting events like the trilogy, I would also like to think that the FWC has provided the windsurfing industry with some fresh air and open a door to different ideas with regards to events.
Our position with the PWA is quite clear, we are not trying to compete with them or their concept, we just want give riders another opportunity to show their talent. Lots of people thought that the FWC had something to do with the other Tour because of the same name and I exchanged a few emails with the manager of the PWA explaining the situation.  I think that any misunderstanding has been sorted out now.

C7: Do you have plans to leave it like a single event or would you like to see the event maybe in the future as a PWA event?
Orlando: It is a bit early to talk about the FWC being  a PWA event, this is going to be only the second eddition and we have a lot of work ahead of us. I hope to be able to talk more to the riders and to the PWA manager in the next months and see what can be the best option for all.

C7: Do you have prizemoney or any prizes for the competitiors?
Orlando: haha, I can´t tell you much at the moment, I can tell you that we offer free hotel, lunch, energy drinks and free vans for all the riders…

C7: What big names can we expect to compete in the event?
We are lucky again and these are the riders : JB Caste, Thomas Traversa, Jonas Ceballos, Dario Ojeda, Alex Mussolini, Anthony Ruenes, Jules Denel, Dani Brunch, Fabrice Beaux, Patrick Vigouroux, Martin Ten Hoeve and Adam Lewis, Stephan Etienne and 3 other locals, plus we are expecting some other big names to drop by during the contest……

i heard rumors people competing in pwa getting problems if they join FWC?
what is it about? thx

last year was great, Fingers crossed you get some amazing action this year! Well done on organising such a fun event!

Hi there, just wanted to say thanks 4 the great efforts you are doing for this excellent format. this really inspiring . thats the kind of pr hat our sport needs to get back in the spotlight …