The PWA tourplan had several events at the beginning of the season, which were not confirmed at that time. These days some fresh confirmations came in and the actual tourplan looks quite nice. The Slalom event in Alacati has been confirmed plus a new “exhibition” event in the megacity of Istanbul. Overall 350.000 € of pricemony will be splitted in between the best riders from now on till the end of the season!

The worlds best slalom racers will fight for 10,000 € pricemoney, racing in a long distance competition, while the 2 days on the Bosphorus on the 6th and 7th of August! The top 4 ladies and the top 16 men from teh 2009 Slalom ranking will be allowed to participate plus some wildcards for Turkish national riders will be available. It will be a exhibition event and not count for the overall tour ranking in the Slalom discipline. 10 years ago a quite similar event took place already, which got won by long time racer and speed specialist Finian Maynard in front of current PWA chairman Jimmy Diaz. Two days later all PWA racers will compete for 55.000 € in the bay of Alacati, one of the worldbest Slalom spots! The Slalom paradise of Alacati will see races in the ladies and men category from the 9th till the 14th of August 2010.

The top 4 ladies in the 2009 PWA Slalom ranking (Source: pwaworldtour.com). 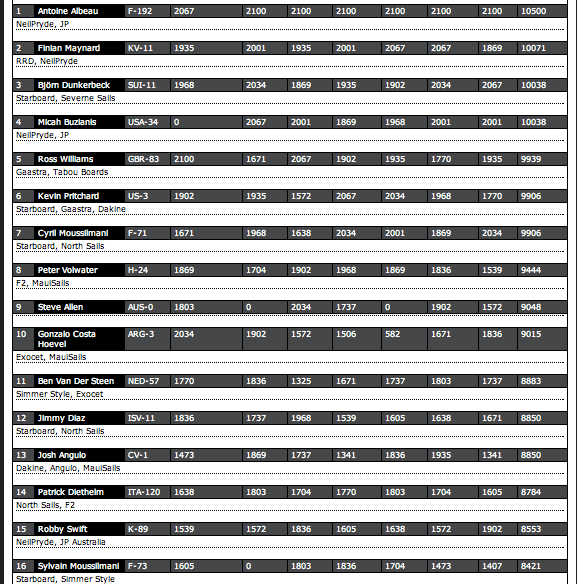 The next PWA event will be the  freestyle event on Lanzarote – Cost Teguise, which will be held for 4 days from the 30th of June till the 3rd of July. It´s in general a windy and there is a good chance to get more than 1 single elimination done. The fleet in the men´s category is super tight this season. Steven van Broeckhoven, Davy Scheffers, Nicolas Akgazciyan, Andy Bubble Chambers, Adrian Beholz and also top local Antxon Oetagui had a good warmup on the EFPT tour. But the gang from Bonaire  with Tonky and Taty Frans and Kiri Thode plus current worldchampion Gollito Estredo will fight hard against the strongest Europeans.

The ladies fleet for Lanzarote looks relatively small. It´s the only event in the freestyle discipline for the girls, like a real worldchampionship! But just 9 girls have signed in so far. Is this the end of the ladies freestyle? Big favourite  is Sarah-Quita Offringa, but names like Yolanda de Brendt or Laure Treboux are well known as well. The Moreno twins Iballa and Daida will focus on the wave discipline in 2010 and looks like they will not join the event at Costa Teguise. 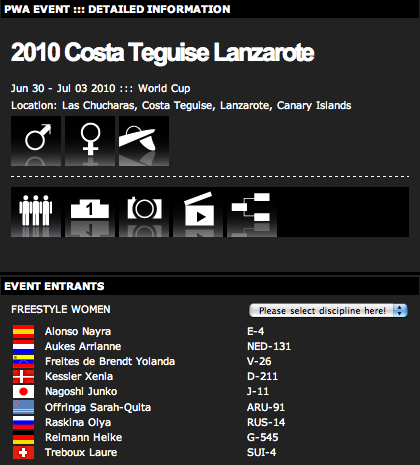 The following PWA tourstop on Gran Canaria will see competitions in the wave discipline only. The event will start on the 6th of July and last till the 9th of July. Big favourites are Philip Köster and Victor Fernandez in the men category and for sure the Moreno Twins in the ladies fleet. 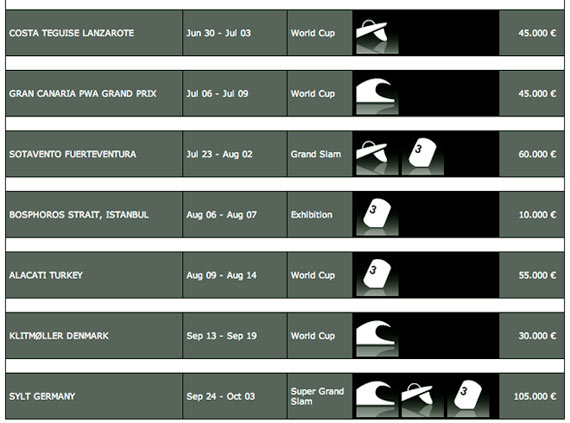 Idiots, you have no idea

i agree, this is really sucks

it sucks!!
the wave tour sucks!
i mean, pozo is ok and klitmoller can be nice…
but where is a tourstop whit some nice wave to ride???
ok, capoverde is gone with josh..
but there are so many place in the world!!! you can just watch the really nice non-official wave competition done this year.
stop thinking just about money and make a decent wave tour!!!!
and if i have to be correct freestyle tour also sucks a little bit.
not a tourstop with “real” flatwater.
ok so this is my opinion. goodbye to everybody…