Hugo de Sousa and Loick Spicher set out from Brazil for a shared mission.  The 17 year old Hugo de Sousa from Brazil, who has made a name of himself with his outstanding Air Moves, was not able to show his skills in the difficult gusty and choppy Fuerteventura conditions during the PWA events last year. To get closer to his dream, becoming World Champion he’d have to train more and get more consistent in his moves in all kind of conditions. Together with the Swiss windsurfer and his friend Loick Spicher and the support from Pousada Windjeri he has now the possibility to train at different windsurfing spots and to travel to the freestyle events.

At the moment they are on Bonaire and prepare for the upcoming PWA Freestyle event. The Brazilian, who still is an underdog in freestyle competitions is highly motivated for the first PWA Freestyle event of the season, although he has injured his thorax 10 days ago.  Read more in Loick Spicher’s story below. 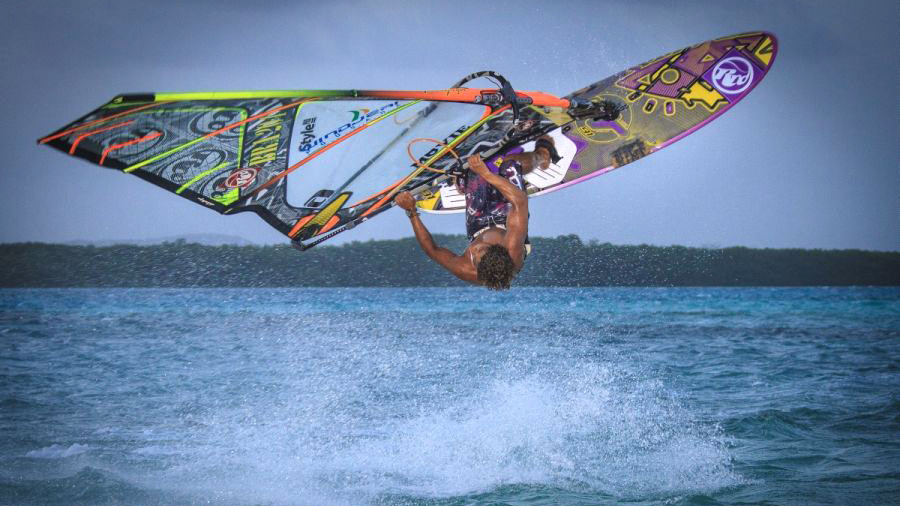 The month of May and the beginning of June were awesome here on Bonaire! Lots of windsurfing every day and we are that lucky to have one of the best windy season for years. For Hugo, the daily training really paid off. He got very used to his 5.2 Style Pro RRD sail. There were many strong and light wind days all over the time so it was perfect to windsurf in all kinds of wind conditions. Day after day, you could see how he improved his consistency in his moves. He started to train the moves on the other tack and pretty quick landed many new power moves as the Culo, Burner, Kabikuchi and Skopu. Even if he can not land those anytime yet, he already performs strong moves for good heats. To be pushed at first by world’s best freestylers Gollito Estredo and Steven Van Broeckhoven in El Yaque (Venezuela) earlier in the year and afterward here now everyday on Bonaire by Kiri, Youp, Amado, Taty, Björn and others, has been a perfect motivation for Hugo to be windsurfing on the water every day for many hours. All the people and even some of the pros are impressed about his commitment and effort to improve. 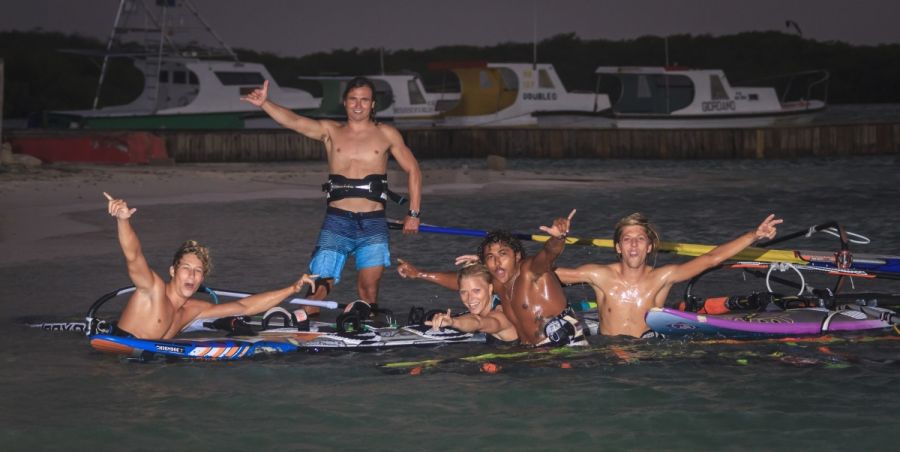 One of the highlights of the training was when Kiri came to Hugo and asked him for a battle on the water. Hugo, honoured about the challenge, accepted the duel. That is when, on a beautiful sunset evening session, both were firing out big moves in front of a little public. Kiri’s performance was clearly still a number higher. Nonetheless, Hugo was not giving Kiri an easy time. It was very nice to see that Hugo’s level gets closer to the one of the world elite and that he was performing his best tricks with lots of power in the light wind. 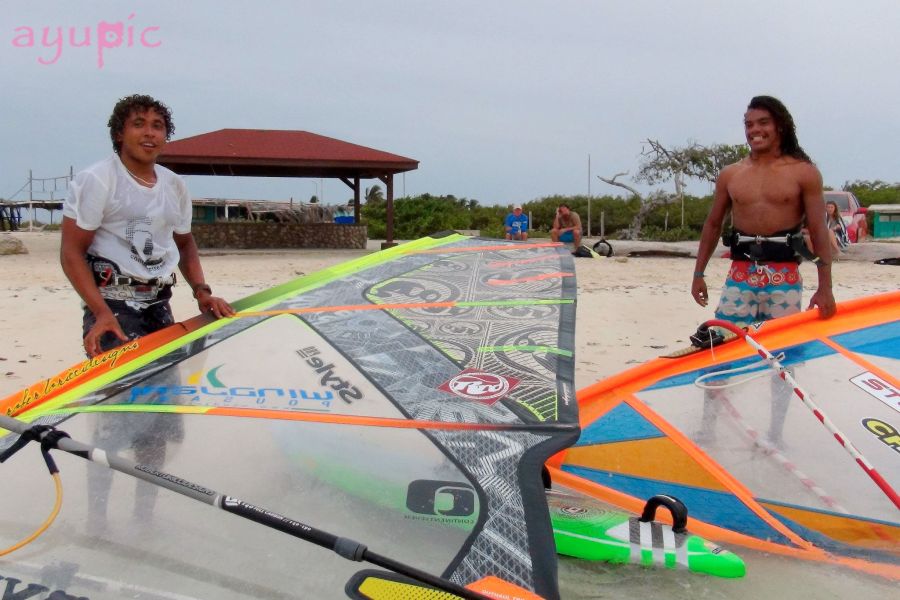 Hugo de Souza in the battle against Kiri Thode

During the whole time, we had awesome going outs with friends, chilled barbecues, nice beach parties, birthdays and other events that just made our stay pleasant. On non-wind days we went to snorkel around the island, went several times cliff jumping and relaxed whole afternoons at the beach. All this adventures were a hell of motivation for us and always kept us motivated for the next windsurfing training sessions. The past two weeks most of the competitors started to arrive to prepare for the event. The spot can be crowded sometimes and the level on the water gets even more spectacular! Being on the water with so many good guys is always a pleasure. It looks like everybody trained hard this winter and is ready to show up on a whole other level at this first world cup next Friday. There are some rumours of injuries. Well Hugo is one of the unlucky men who had a bad crash lately. He was going full speed switch stance and somehow had a big spinout, which stopped him instantly. He landed hard on the boom, fully on his rips. This was 10 days ago so he got now some time to recover. It was very difficult for him to watch the people windsurfing and not going out. However, after some tries on the water he understood that the smartest thing to do for now is to let rest completely.

Amado and Kiri sharing one equipment

Amado and Kiri sharing one equipment

Hugo windsurfing with the kids

Hugo windsurfing with the kids

Hugo made his comeback already this last weekend at the Sorobon Masters. He felt better and ready to warm up on the water again. He took this competition as preparation and last check before the upcoming world cup. Well he had strong opponents and all windsurfer at a high level. Especially the top five riders included Hugo, who were Amado, Dieter, Tonky and Taty delivered some impressive heats. In the end, Hugo lost his heat against Taty. It was a good heat from both sailor but Taty showed one, two better moves, which gave him the advantage.

The final heat was between Amado and Dieter. It was a tough battle between the two guys. In the beginning Amado took the lead but not long and then it looked like Dieter was in the front. However, it was not enough for Dieter unfortunately, as Amado windsurfed a solid heat until the end, took the advantage and won. Amado really impresses everyone and I am excited to see him ripping it this weekend. 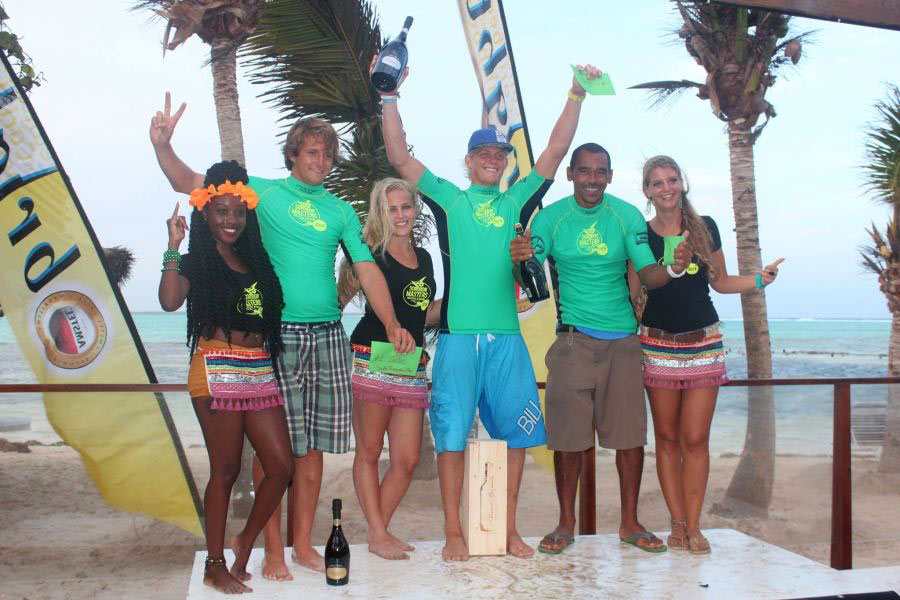 Some days ago, it looked like the wind for the competition is going to go down again and be light, but today the forecast for the competition days just looks epic, have a look at it. It will be perfect to have such strong wind here. Like this, the action will be on its highest level, you can expect to see the latest moves and very spectacular heats. The event looks very promising. Let’s bring the action!

will there be a livestream again during the PWA event?

Yes, pretty sure about that.