Another year and another Taranaki Wave Classic is over! This year’s event showcased the best conditions Taranaki can offer, with an insanely epic, mast high, down-the-line, Pungarehu extravaganza! 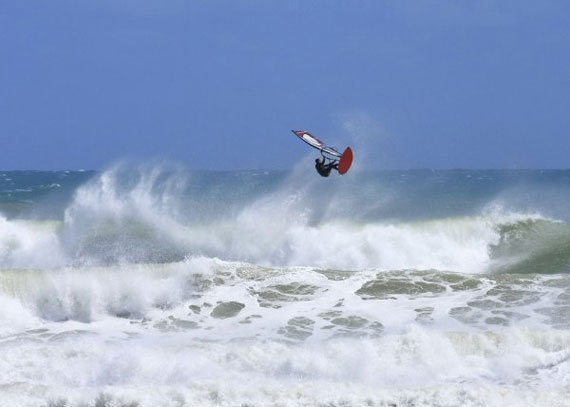 The warm-up for TWC09 began early on the Friday with a convoy of eager beaver Wellingtonians (led by Chris Brown) leaving our nation’s capital at 5 am. By 9 am they were at the holy grail of NZ wavesailing: Pungarehu. With the tide coming in the hordes hit the water and by 11 am there were around 15 – 20 sailors catching the mast high sets consistently rolling in to the beach. The wind picked up throughout the morning and by midday it was blowing 5.0 and small board weather. Perfect!

With solid surf and sailors ready to test themselves there was always going to be some carnage. A few sails came back to the beach in pieces (including two in consecutive waves from the New Caledonian brothers—who also must have made the longest trip to get here out of all the competitors. We saw some great wipeouts and a steady stream of sailors making their way back up from ‘Crushers’—a long slow walk.

Saturday dawned sunny, warm and… windless. We gathered at the Oakura Boardriders Club for briefing and goodie bags. Thanks to our platinum sponsors Carbon Art and Rodgers Dental the goodie bags were packed with loads of high energy nutrition (read sugar) for hardcore sailing. Competition never looked likely on the Saturday, so everyone adjourned to Weld Road to surf, laze about and check out the styley gear from sponsors: Carbonart, KA Sails, Gaastra and Naish. About 3 pm the bbq and Mike’s beers were busted out, capping off a very pleasant afternoon – as good as you could hope for without wind really!

Sunday found the TWC competitors heading to Kina Road in the hope of a northerly and out of range of our radio sponsor ZM. Thomas and a few other desperadoes dribbled around in some cross-on mush and almost everybody surfed in the fun conditions. Unfortunately decent wavesailing wasn’t on the cards for the second day running. Only one thing to do really: party it up, get the hangover from hell and the wind would blow for sure.

The 90 odd competitors met back at Oakura Boardriders Club for some great food and a few brewskis in the evening. Well over $7000 worth of spot prized were handed out. Of course the prize of all prizes at any TWC is the Carbon Art waveboard. James Dinnis arrived complete with a board ‘blank’ in tow; win the board and you could have whatever shape you desired! To great anticipation the winner was announced as Paul Sinclair from Invercargill. He looked pretty damn happy and gave James possibly the first ever ‘so stoked I won the board’ hug.

The Monday and the travelling convoy made its way in dribs and drabs (depending on the state of hungover-ness) down to Kina Road. About 12:30 the wind picked up from the north and Thomas got out there to show us it was definitely sailable with the swell providing waves up to about half mast. In the space of about 10 minutes the number of sailors on the water went up to about 30 and the contest was on!

An hour-and-a-half of frenetic wave riding (and sharing waves nicely) found finalists for each division and then the top guns went out on their own for the finals.