It has been windy lately at Pozo Izquierdo and Moritz Mauch has been working on his move repertoire. Moritz Mauch is known for his playful windsurfing style and sent us an Air Taka attempt. This attempt reminds us a bit on a T-Bone (Switch Stance Forward), but Moritz told us, that he actually tried to land this move in the wave again and that he already did. Moritz, keep it up!!! 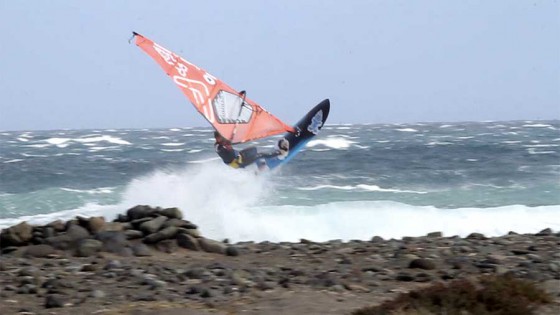 Whatever it is is – it looks really cool and radical. As I am far away from any of these moves it is difficult to analize… But I hope Moritz will finish it one day and then he can name it himself 😉

Hmm, you think? Cheese and forward are’nt alike. Switch forward drags you around like a… forward. Goiter is a clewfirst cheese, so this gets to be a clewfirst goiter?!!? Been trying for years so would be cool to see more…

come on dudes. this is a simple switch forward try???!?!

I can’t find any vids of the T-Bones but there was the odd one – just a bit ahead of the Go Pro era and I never owned a camera so never really filmed it. Michael (german guy) who was working for the PWA back then got the best ones of video I think.

Haven’t done one in a while! I preferred to bow out gracefully in 2008 and watch from the side lines 😉

Following up on this move, we remembered filming a quite similar version of this move last year, more upright, especially the first version, more like a Air Eslider. It’s filmed from another angle and gives another perspective on the stance and sail position of the move.
https://www.continentseven.com/clew-first-air-takaair-eslider-moritz-mauch/

PWA Calendar 2020 – Fuerteventura…
25. May, 2020 by medea
Hi Max! Rumors say the Fuerteventura World Cup is already cancelled, too but it’s not official ...