Record attendance on the second day of the PWA Surf Worldcup Podersdorf and massive tow windsurfing action over the ramp. 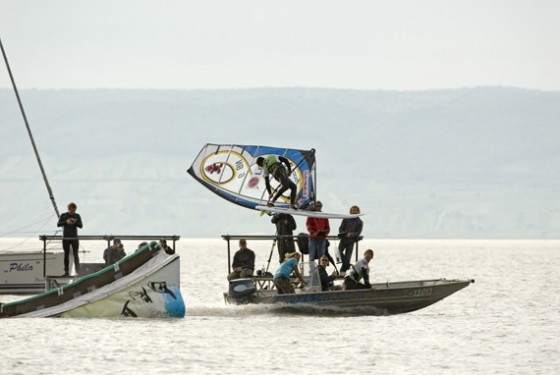 Strong winds from the northwest surprised everybody in the morning of the second day.

The riders, who already were on the beach had an early windsurfing session. At around 10 o´clock he first heat with Dieter van der Eyken against Max Matissek and Dominik Schönthal against Raimondo Gasperini was started but got cancelled afterwards. The riders had a hard time on the water, because the wind was already really light and the sailors had to use the gusts for their moves. After that first attempt to start the competition, the wind disappeared completely and it was again the same like yesterday: sunny, hot and no wind.

The many visitors spent their time with the many sideevents, tested Stand Up Paddle Boards or visited the many stands to check out the latest windsurfing equipment or get some Flip Flops, DVD´s, Boardshorts, T-Shirts, etc. 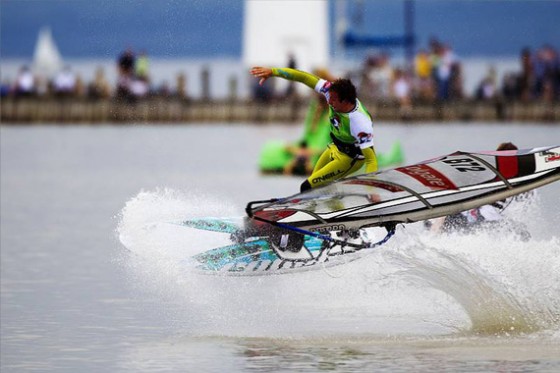 At around 3pm Steven van Broeckhoven and Taty Frans decided to make some action on the water, although the water surface was totally glassy. Steven got accelerated to full speed by a Jetski in a big curve towards the beach, he let go the rope and just nailed a perfect Ponch. Dry. The crowd was impressed. In his second attempt he showed a Flaka with the same perfection. Taty made a Flaka Diablo.

Right after this session wind from the south brought planning conditions, but only for about 10 minutes.

At 5pm the qualifying round for the 1000€ ramp competition was set. Tonky and Taty Frans, Nicolas Akgazciyan, Steven van Broeckhoven, Max Matissek, Tom Hartman and Daniel Bikich, were on the starting list. Again, the riders got towed by a boat towards the ramp, to let go the rope, approach the ramp and fly high. The most impressive jump was made by Taty Frans. He did a massive Air Flaka and scored high points with it. If tomorrow is no wind again the ramp competition will be started.

The forecast for tomorrow looks much better than the last two days with wind from the north-west in the morning and southwind in the afternoon. Because the wind in the morning starts really early, the skippersmeeting is set for 6 o´clock. It will be a long day, but there will be a good chance to start the competition.