The conditions were really light, but anyway we want to push, but it’s better to have something done than nothing! Steven van Broeckhoven about the EFPT Podersdorf 2014 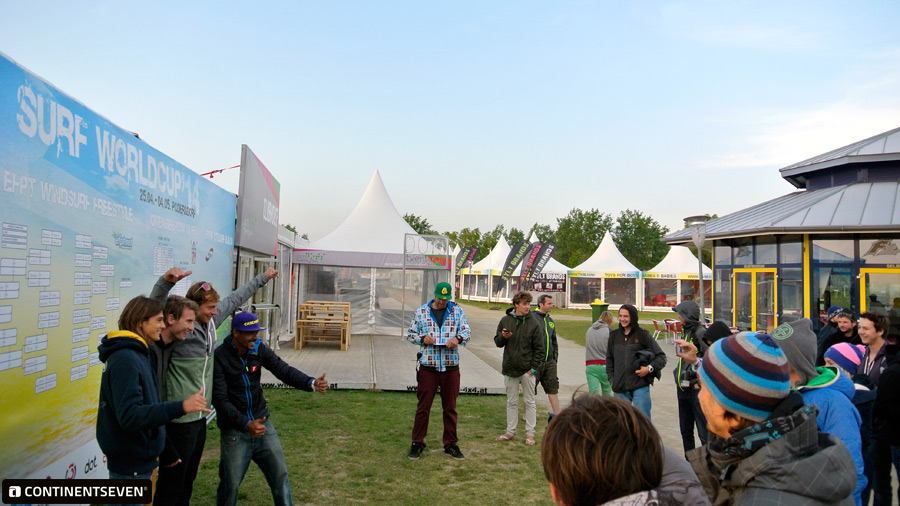 Day 5 at Podersdorf at the EFPT event finally saw windy conditions early in the morning and later in the afternoon. The wind was light and definitely at the limit, but the EFPT race crew decided to go for at 6:45. A few heat saw conditions on the limit. Riders were pumping really hard in 11 knots of wind, but did not make it into planing several times. The heats got judged with the best trick format. The best 3 tricks on each tack counted. 14 heats got finished during the morning hours, but a heavy rain squall stopped the freestyle action for a few hours. Steven van Broeckhoven, Tonky Frans, Davy Scheffers and Jacopo Testa qualified for the top 4. Steven was sailing on another level. He was planing most in the 11 to 14 knots conditions and was able to land incredible double moves like Flaka Shakas or Puneta 900°, Culos on both tacks an much more. He combined old school with new school perfectly, slided through Lolly Pops. As a little comment: we did not see any single Spinloops during all fourteen heats, but tons of Grubbies,Willy Skippers, Spocks and Esliders. A bit like in the old days, when short board freestyle had the hype back in 2001/2002.

A few freestyle riders left the arena quite early and some of them left very disappointed as they struggled very much in the light wind conditions. Big names went out in the first or second round. Youp Schmit, Max Rowe, Dieter van der Eyken, Adi Beholz, Adam Sims, Max Matissek, Yarden Meir, Julien Mas or Mattia Fabrizi. Just to name a few. 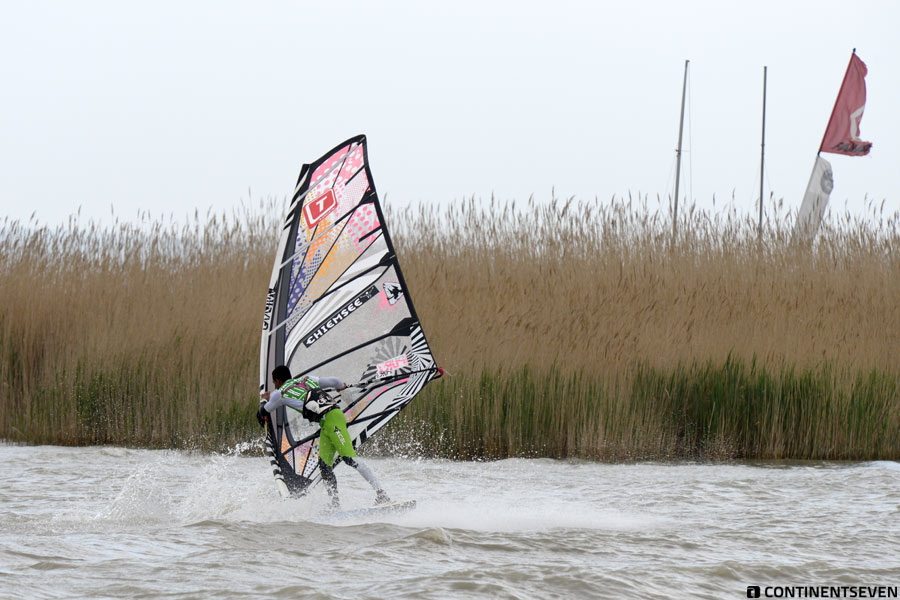 Tonky impressed with his easy going freestyle and had good drive, too. Davy Sheffers definitely has done his homework during the winter months and landed a lot of slided moves textbook, with a lot of style qualifying for the top 4. The big surprise of the whole single elimination was Jacopo Testa. But we had him on the radar for a few years. He is well known for his massive Air Kabikuchis and Air Skopus, but showed excellent performance in very light conditions. He is a skinny rider and was able to nail a double Spock on the way out. He stopped top pro Dieter van der Eyken in round two and afterwards kicked Canadian Phil Soltysiak out of the contest.

The A-380 air show during the finals

After a midday break due to rainy cloudy conditions the single elimination got started due to the increasing north western wind around 5.15 pm. Big high clouds were in the air. A huge A380 cruised above the event site. Almost no spectators were on the beach. But Roberto Hofmann was on the micro and gave it all. A bit of sunlight and finest wind conditions with gust up to 20 knots made it possible to guarantee fair conditions for the semifinals. Just 4 riders were still in the competition and had the chance to win the single event. The semi final started. A few riders watched the action from the right corner of the bay as the judges did do. The finalists went far upwind on top of the huge heat area and started their heats, where the wind was the best. 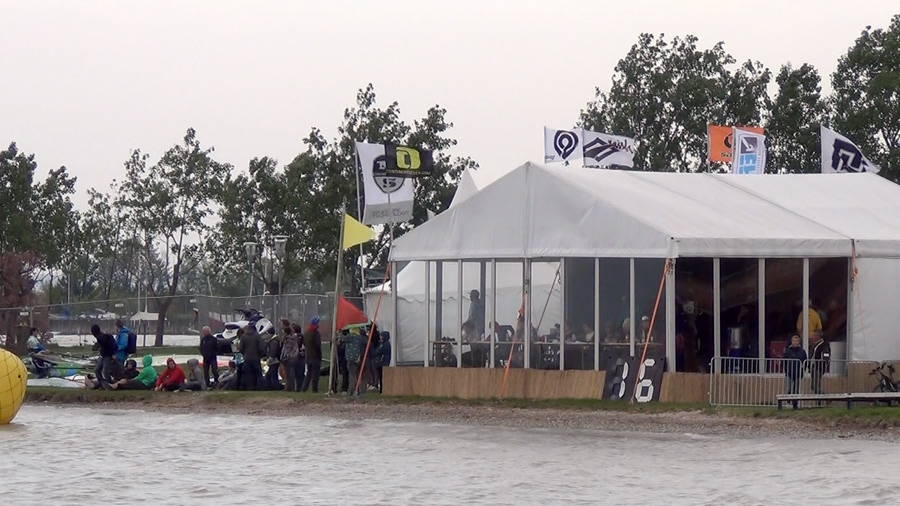 The judge box and the riders at the beach

Steven and Davy showed a firework of moves, but Steven had the higher level and again impressed with perfect landings. He made it straight into the final. Tonky defeated Italian Jacopo Testa. the two top seeded riders went into the final: Steven against Tonky. Number 6 Davy Scheffers and number 26 Jacopo Testa of the seeding list made it into the the semifinal. Jacopo, who travelled from Sardinia, Porto Pollo to Podersdorf, scored big and impressed every one. He won the losers final against Davy and made it on the podium at Podersdorf for the first time in his career. It was a 5:0 decision. Jacopo impressed with Burners on both tacks!

In the winners final Steven continued with his powerful freestyle show and won against Tonky, who changed to his 6,0 sail size just after the heat started. He felt not enough power on the smaller size and you can imagine how difficult it is to land the latest radical tricks with such a huge rig. 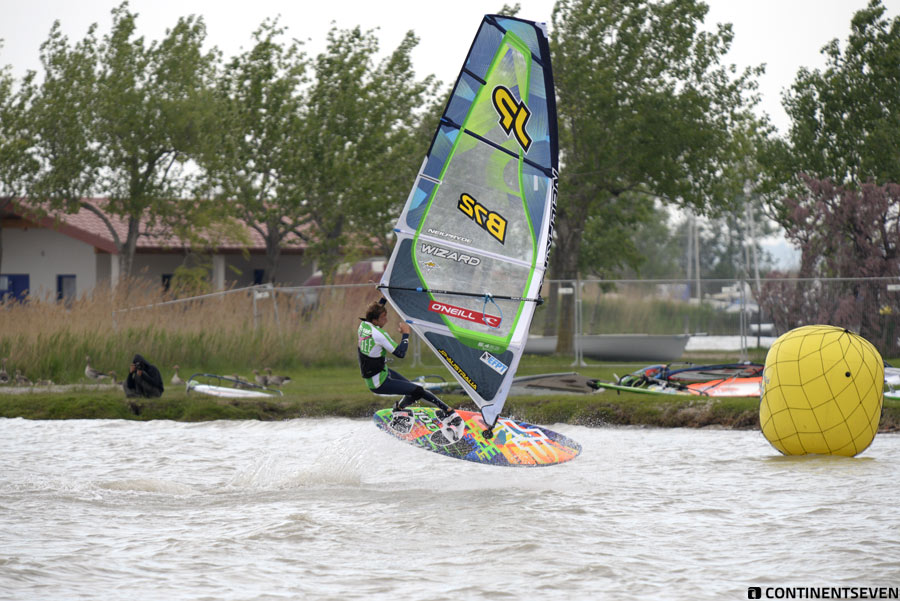 Congratulations to all riders, who made it possible to compete in so light conditions on such a high level. Already during the first round heat at 6.45 am we viewed radical Culos, Flaka Cana Bravas, regular Chachos, double moves. Big respect to everyone!

We anyway enjoyed it to be all day long on the beach following the action. Looks like Steven van Broeckhoven, the 2013 EFPT winner and number 3 in the Worldtour ranking again improved during the winter months – he just arrived from Maui at Podersdorf with a massive jetlag. It will be interesting, what will happen, if Gollito Estredo and current PWA Freestyle Worldchampion Kiri Thode are going to compete against each other. 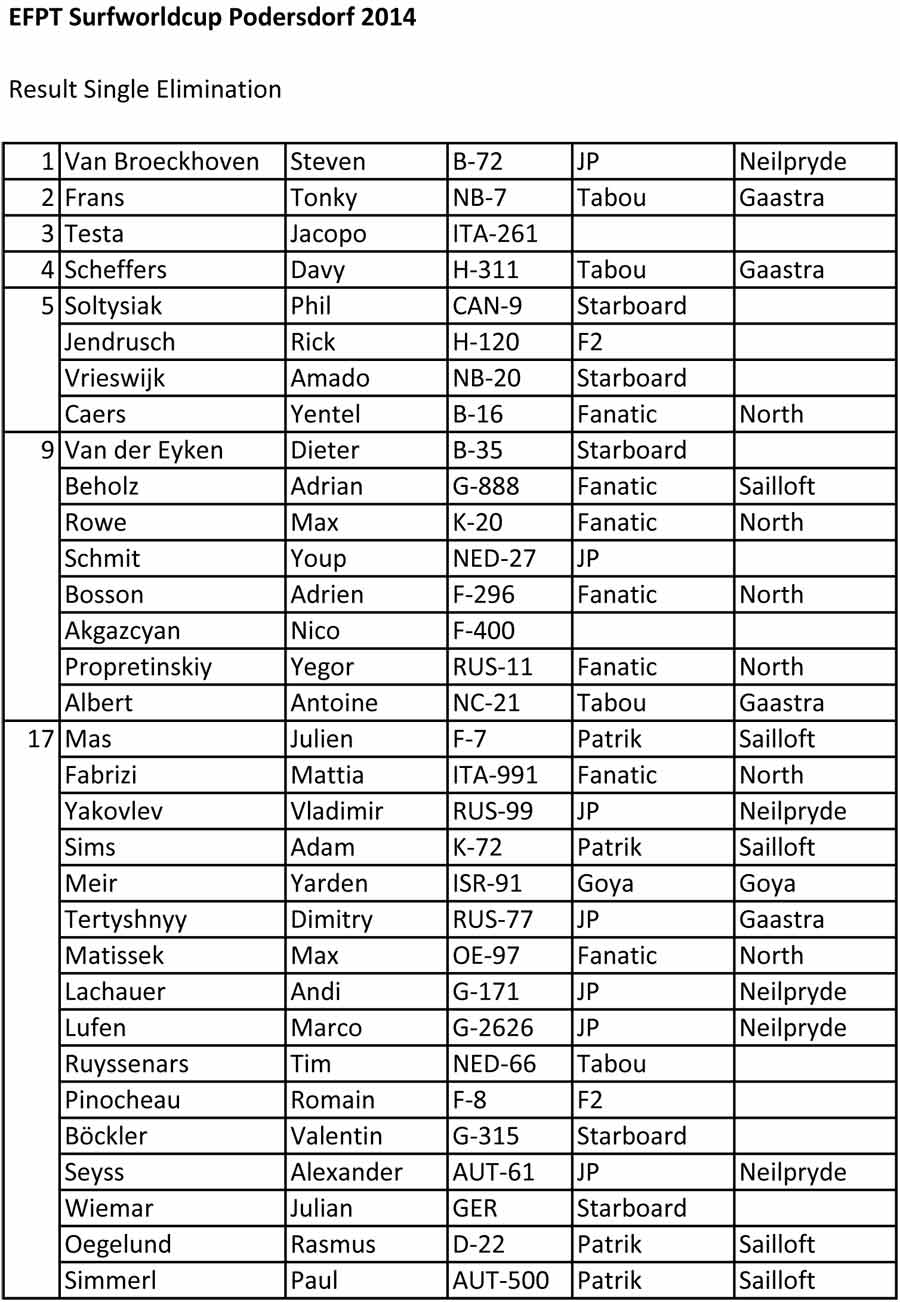