Nic is a 22 year-old windsurfer from the UK and belongs to the young generation of freestyle windsurfers. The young Brit is probably the best freestyler in his country and has just recently won a national freestyle competition, the “King of the Trench”. Nic has an outstanding windsurfing style, with a lot of flow and his moves on starboard tack are amazing. He told us, the Double Air Culo is still “pissing him off” but we are sure he will very soon stick Double Air Culo’s, too. He is still waiting for international top results but his true love is anyway free sailing togther with his friends, like Balz Müller.

“South coast stuff” is Nic’s latest video with action filmed by his dad at his home spots in England. In between his current job in landscaping and fencing, he tries to find time for windsurfing sessions and he actually just missed a great session due to the job. But once he makes it on the water all his energy is focused on his windsurfing. In addition to the video we hooked up with Nic to speak about his status quo and his plans for the winter.

Continentseven: Impressive moves, great action. Are you inspired by Tonky’s style?
Nic Hibdige: The Bonaire boys are the reason I’m freestyling today. Tonky, Taty and Kiri really inspired from the beginning. And yeah Tonky’s flow makes me stoked. I would say the whole Tabou/Gaastra team put that real emphasis on style for me.

Continentseven: What really stands out are your incredible skills on starboard tack. Do you like starboard tack over port tack for jumping and air moves?
Nic Hibdige: For ducking moves, regular and switch, starboard tack is my favourite for sure. I feel a bit more in control jumping that side for sure. Along the South Coast it’s all starboard tack jumping so I guess over the years that’s what I have sailed more of. 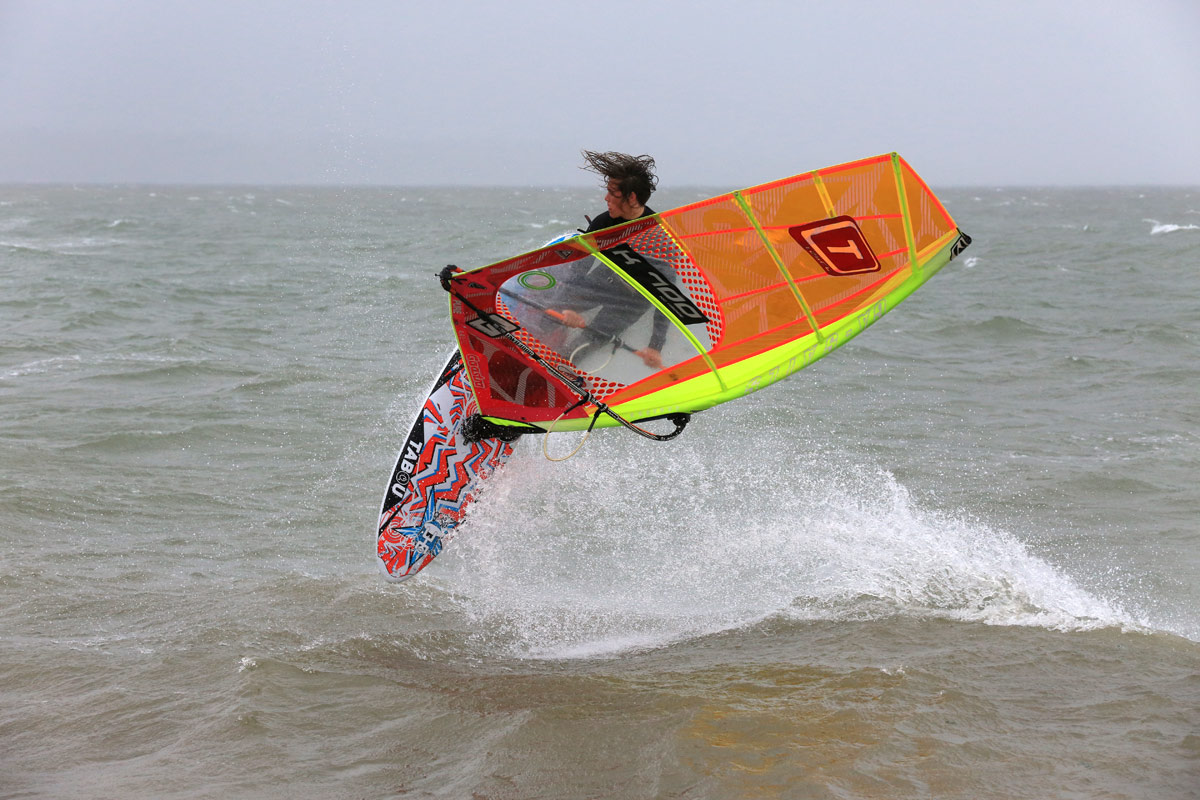 Continentseven: We haven’t had many freestyle clips from the UK online so far. Your video is one of very few freestyle clips from the UK. So tell us what are your home spots and where are they?
Nic Hibdige: I have always wanted to put out a solid clip of my home, I’ve just never really filmed enough or had the conditions at the right times. In this video the spots are Tanners Lane and Avon Beach with a few clips at Hayling Island which is about an hour and a bit from where I live. Phil Richards is a local there so it’s cool to hook up with him and sail together. He’s another guy that I would say gets me stoked, he lives for windsurfing and puts all his time and energy into it which I respect a lot. He was also competing on the UKWA whilst I was a grom.

Continentseven: Is it always cold when it’s windy?
Nic Hibdige: It’s never really boardshort weather. Peak summer is nice, but it’s not usually that windy and there won’t be any swell about. This year the temperature has actually been great, it’s only starting to get cold now… January/February are brutal and I don’t really want to be here for that hahaha. 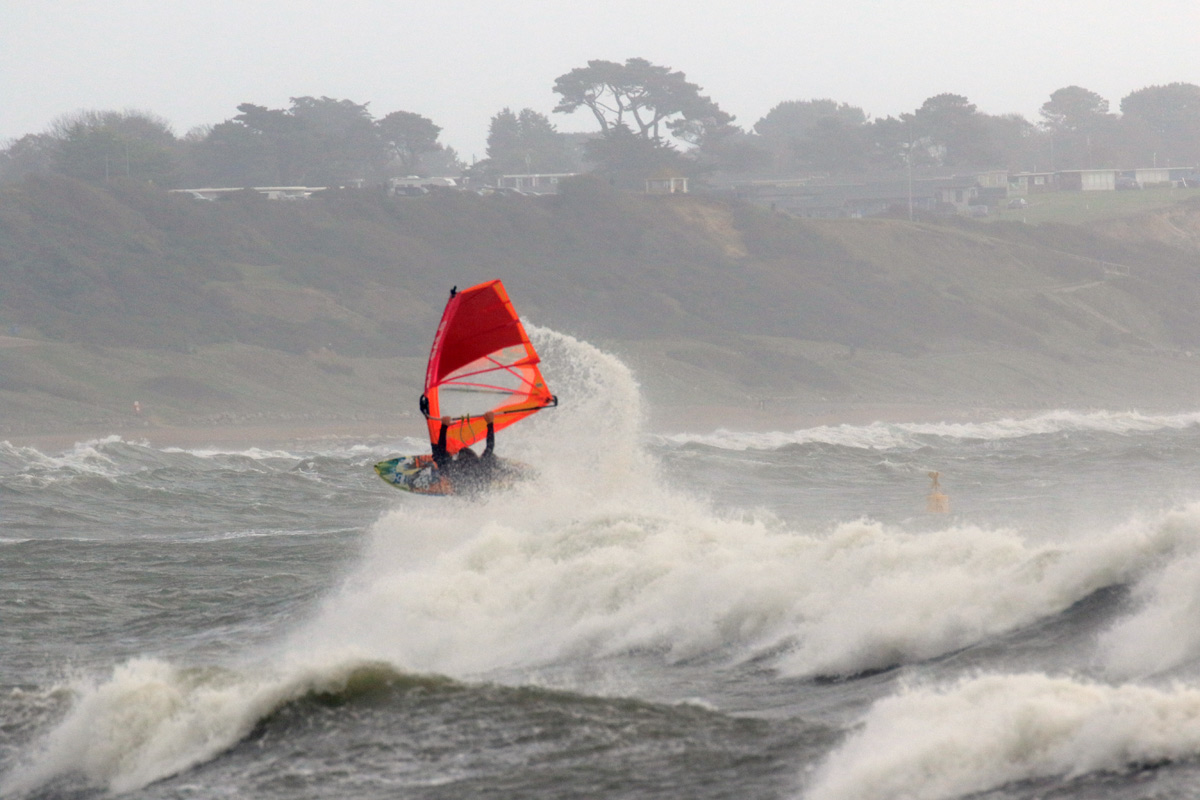 Continentseven: The conditions look really nice. You even got ramps for air moves. Guess, it’s about time to invite some of your friends from the tour!?
Nic Hibdige: Everyone is always invited! I’d love to actually sail with some of the guys here! The thing is you can’t really guarantee wind at any time of the year which makes it less appealing. Best bet would be on forecast for a winter storm/ solid low pressure. I’m sure some people will head over soon. When they do I’m sure you’ll see a video showcasing some more spots as well. 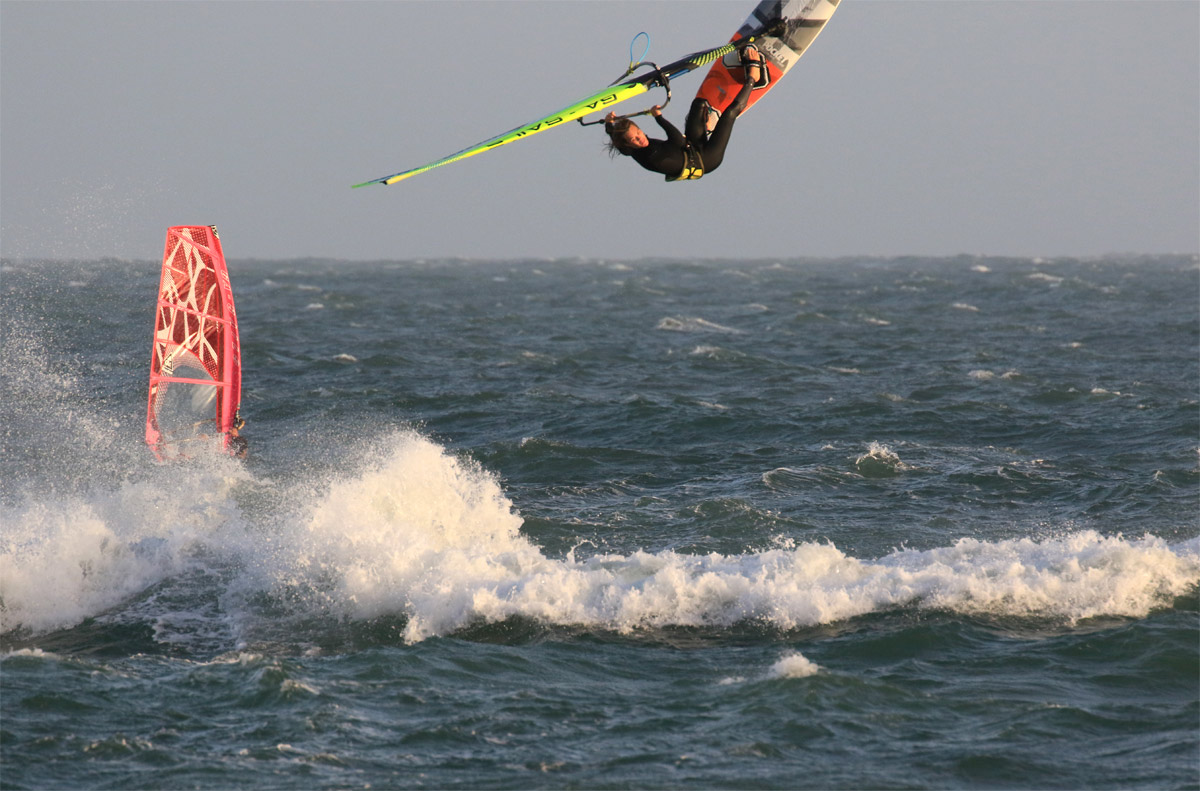 Continentseven: How far are the spots from where you live?
Nic Hibdige: Tanners has always been my go to for freestyle, it’s very close to home and in the summer the sea breezes work better than anywhere else along the south coast because of its location. The south westerly’s funnel a bit between the mainland and the Isle of Wight giving a few knots more than anywhere. If the locals are out on 5.3m-5.7m underpowered at Avon I can be 10 miles down the coast at Tanners 5.2m juiced up.

Continentseven: Are you the only freestyler around?
Nic Hibdige: Bubble (Andy Chambers) moved to the area a few years back and we sail Avon a lot together which is cool. Another guy from the area, who needs to be mentioned, is James Cox, he’s a ripper in the waves and the true king of the south coast. He windsurfs for the love of it, rips harder than anyone, all whilst holding down a full time job and family.

Continentseven: How popular is windsurfing in general at your home spots?
Nic Hibdige: In the last years I have definitely seen more and more people sailing around my spots. These days on a good forecast there will be 40+ guys out! Even during storm Brian there were a lot of dudes attempting to hold onto their old 3.3’s. 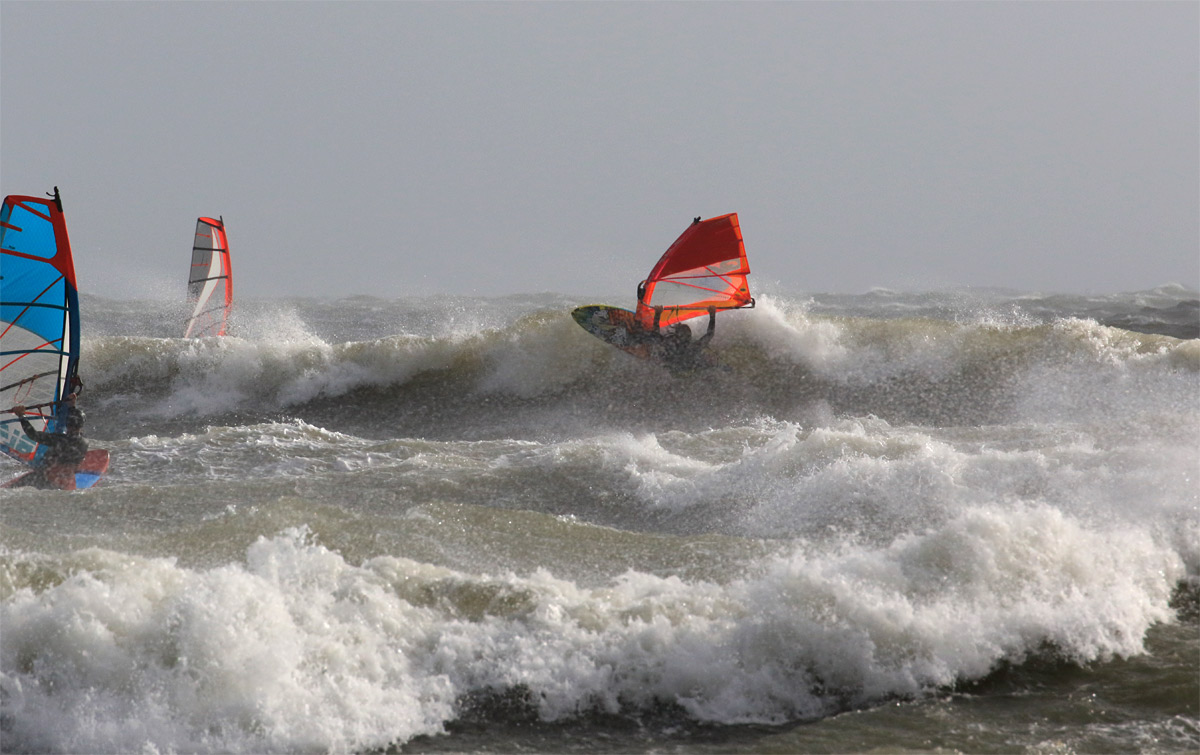 Nic Hibdige with a nice cutback on a high wind day

Continentseven: Looks like you have improved your windsurfing since we saw each other during summer in Fuerteventura. You get more airtime in your moves now. Do you feel the same?
Nic Hibdige: Haha thanks, but maybe I just didn’t sail my best in the event in Fuerte…..wasn’t exactly my plan to lose first round in the double, but Taty Frans is an incredible sailor and I’m not upset to be beaten by him at all. I feel I have been at a good enough level for a while now to sail some solid heats but it just hasn’t all come together just yet.

“The double Air Culo is p!$$ing me off! This move has been the bane of my life for so long.”

Continentseven: And you go for double Air Culos. Is this the double loop of freestyle?
Nic Hibdige: The double Air Culo is p!$$ing me off! This move has been the bane of my life for so long. I thought I was close to it a while back on Bonaire during the beginning of it… I guess I never had enough consistent time on the water to keep pushing it. I have been doing lame water start ones every now and then for a while and landed my first clean one just before Sylt, but I am far from having them on lock like Amado haha.

Continentseven: Will you stay in UK during the winter or will you travel somewhere? At least you have a great filmer available…
Nic Hibdige: I will be in the UK working and sailing until the start of next year I think. I’m planning on heading to Tarifa with Balz and his bro for the winter and living around there in the van. We would like to explore Portugal for its surf and check out the rumours of the new event happening there. Plus a possible 1 week trip to Morocco as it’s so close.. My dad has been stoked on windsurfing since the beginning, Mum and him are quite into their photography so they have a good setup to shoot with. They have always loved windsurfing together and are always keen to come down the beach to watch me sail which is cool. My Dad is getting pretty sweet with the cam and he never seems to miss a move! 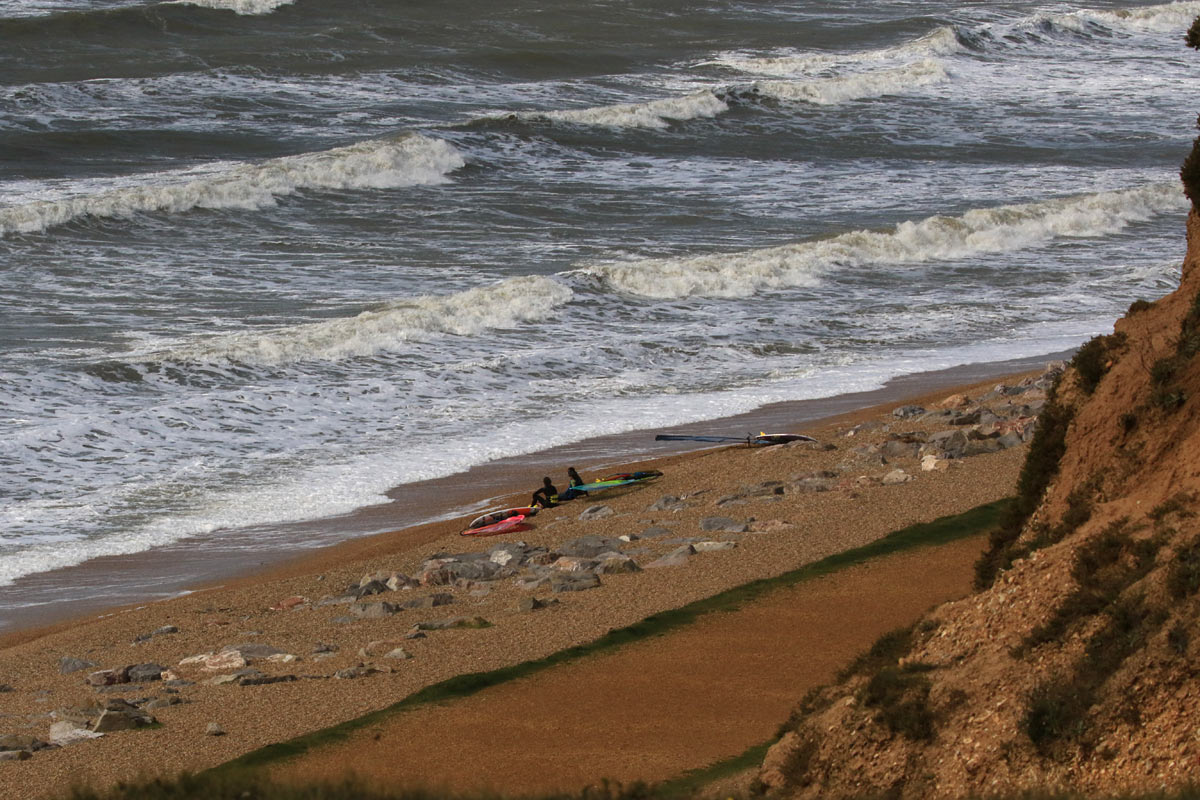 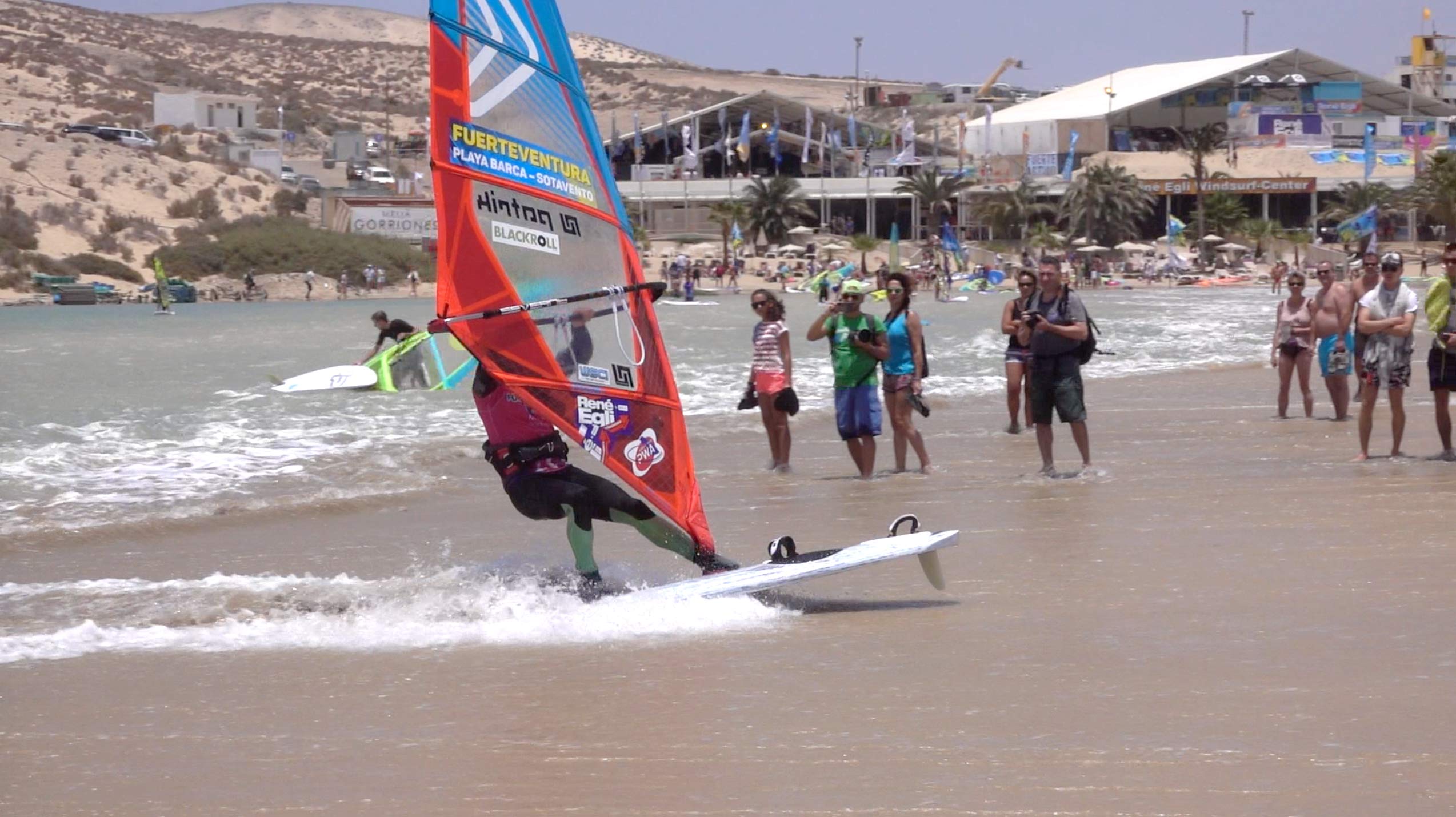