Last week the “Dahab Freestyle Week” sponsored by “Russian 5 Squares center” took place in Dahab. Andraz Zan from Slovenia could win the event in an exciting final, beating Egor Popretinskiy twice in the Double Elimination. Egor was in the lead after the Single Elimination but could not defend his leading position.

Max Rowe (K-448), freestyle windsurfer from England wrote a nice report about the event and he could place himself on the 5th position. In November he damaged his knee in Jericoacoara, Brazil and had to leave earlier than expected. Now he is training in Dahab to prepare himself for the upcoming PWA Freestyle season.

Check out his blog as well: http://maxrowe.blogspot.com/

Had an awesome last week out here in Dahab with the running of the annual Russian freestyle week. Last year the competition had taken place in three different locations around Dahab but with the forecast looking slightly dubious we knew that this wasnt going to be possible this year. However the most were made of the conditions and on the first day we competed about 500metres downwind at a spot called the “Metal Bouy”, the Ganet Sinai hotel had kindly given us the use of their monster power yacht to hold the competition from.

After warming up in the morning before the competition started it was clear that the level was very high. I was definitely more nervous than I should of been but after only windsurfing 4 times in the last 3 months due to my knee injury I felt that my sailing still wasnt back up to my previous level. Amongst the competitors there was some very talented Russian guys, of course there was the familiar faces of a friend of mine Yegor Proprentinsky (RUS-11) the world no. 8. There was also a big group of us from Club Vass/ Club Dahab in the mix with Ric Cleworth (K-958) and Edd Sinclair (K-331) competing in their first ever freestyle competition and very keen to make an impression. We also had the more experienced John Palmer (K-718) and Marco Wedele (G-125) representing the non russian side of the event!! 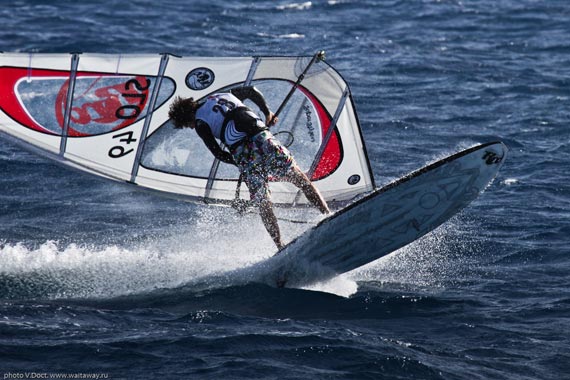 The competiton kicked off as planned out by the “Metal Bouy” with the first round of heats running through smoothley with no major upsets. As my heat got closer the wind just seemed to dissapear around where the boat was positioned, with only 10 minutes until my heat I made the rush back to the beach to change up to my 5.1 as people were now beginning to struggle on 4.7’s. From the beach it was clear that no one was planning and I could see the cancellation flag rise from the boat. When I arrived back at the boat the decision was made just to move to the outer reef were it was still windy. I sailed across to the new spot and was perfectly powered on 4.7 so without hesitation everything was ready to start again. The conditions by the outer reef were pretty extreme for freestlye which is what the organisers wanted they were scoring much higher for big power moves rather than just spinning around. My first heat was against fellow Club Vass instructor Edd Sinclair, I sailed ok making a big shaka and some switch moves which was enough to see me advance into the next round. I was next up against one of the very talented Russian sailors Roman Gusev, this was a big heat as after this it would be the semi finals. I sailed a solid heat making all my moves in the difficult choppy conditions in front of the boat. I knew it was close after seeing him make a Ponch and a very fast Switch Chachoo but was almost convinced that my huge Shaka on my first run was enough to clinch it. Unfortunately this was not the case and after kicking up a bit of a fuss looking through the score sheets it was clear the points were equall, however Romans moves had all been fully planning which had given him the edge. The single elimination final was very close with the Russian love muscle Yegor Proprentinsky coming out on top over the Slovenian Andraz Zan, both sailors were on fire but the Toads and Shakas from Andraz wasnt enough with Egor throwing down huge planning forwards on both tacks and a sick Culo. 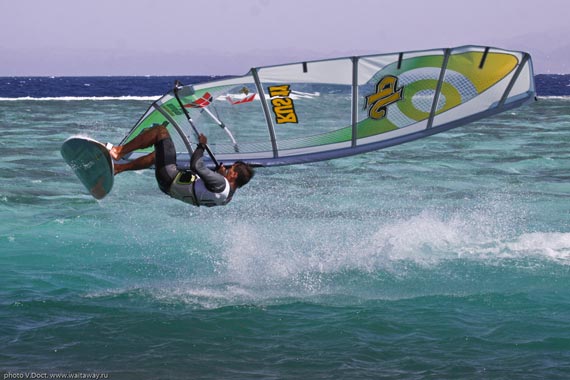 The next few days were windless so it wasnt untill the Sunday we had a promising forecast for a few hours of wind so the waiting game was on.

I made it down the beach at 7 am to meet Dave White who had been out running the Boards magazine test to hopefully get a few last minute photos before he left in the afternoon. I knew I wouldnt have to sail for at least an hour into the double elimination so I rigged my 5.1 Simmer Blacktip and headed off to meet Whitey. Whilst i was busy doing photos there seemed to be a big group of people up in Baby bay one of the super flat water spots in Dahab. I knew the conditions there would be perfect for my new Mistral Joker 98. They didnt have the use of the power yacht so the decision was made to hold the competition up there which was awesome as it was way friendlier for spectators.

When I arrived to see the double elimination it was slightly nerve racking as all the English guys were on the same side of the draw. My first heat would be against the winner of John Palmer and Ric Cleworth, both being really good friends I wasnt sure who I would of preffered to sail against in the end it was John Palmer who advanced. Last time I sailed a heat against Palmer it was in Weymouth harbour in the middle of January at a freestlyeXpression event that I had won so with the conditions being far from what they were that day we were both giving each other some banter on the beach. I sailed a solid heat making most of my moves and nailing a nice no handed Flaka which was enough for me to advance.

Next up was Salama Mohammed (Egy-16) who had just taken down old friend zee German and good friend Marco Wedele (G-125). About a minute in it wasnt looking great and the heat was cancelled as the wind had dropped right off, fortunately the tide was high enough for us to sail over the top of the reef so the judges table was shifted 90 degrees and we continued. The conditions were tricky and the depth of the water on the reef made it harder to focus. However after realising I wasnt going to hit the bottom I sailed my best heat of the competition with a Big Shaka, no handed Flaka and all my Wwitch moves fully planning I advanced straight into the quater finals. This is when I knew it was going to get much trickier and I was now up against Rus-99, Vladimir Yakolev. 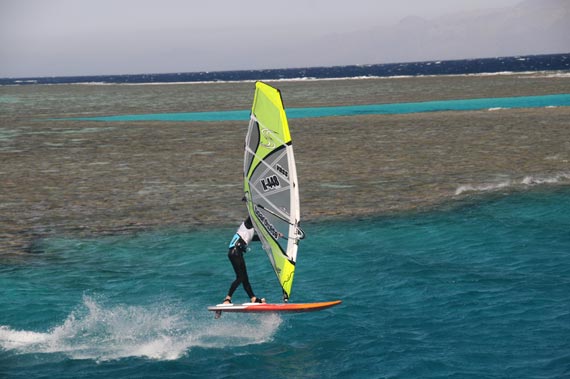 My heat started good with a fully planning Puneta but then I crashed my no-handed Flaka after that I struggled to get back into flow making a few silly mistakes and couldnt seem to find a decent peice of chop to Shaka off, as I came in I knew I had lost the heat but was happy that I was secured in 5th place.

The Slovenian Andraz advanced to find himself straight back up against Egor in the final, Andraz would have to beat Egor twice in a row to take the title and he really dominated the first heat pulling of Switch Konos on both tacks, perfect Toad which was enough for it go down to one final decider. The final was much closer however Egor didnt seem to be on as good form as the previous day where as Andraz was on fire. Andraz nailed a Ponch, Toad, Switch Kono amongst other moves where as Egor seemed to be keeping it much more simple apart from a sick double Spock unfortunately Egor crashed his Culo at the end and that was enough to give Andraz the victory.

Massive thanks to Volva who organised everything and made it a sick event. Cant wait till next year!

Thanks for my photos ))) Full gallery at my site

Hey Mike. Cheers! It is the 2010 Joker and there are more pictures of it on my blog @ http://maxrowe.blogspot.com/ Will have some more detailed ones of the board up soon.

Nice report. Sounds like a great competition. Max, Is that the 2010 Joker you’re riding in the picture at the bottom? If it is post up some pics of it somewhere! I’ve been waiting for mine in the US since August!