From the 11th till the 16th October 2010, Brazil, Araruama, Rio Janeiro an international Formula event took place. We saw excellent wind conditions – it´s high season in Brazil – and results in different classes: in the Formula Windsurfing Youth and Masters Class and the Formula Experience Class (Starboard/Severne), whch is quite popular in Brazil, because it´s a simple concept. It´s a one sail, one board class. Not too many big names were on the starting list. The worldwide best known sailors were Paolo dos Reis and Gabriel Browne, both from Brazil. And they both were the sailors who dominated in the 15 rounds, which had been sailed at Araruama lake in 8 to 25 knots of wind. Paolo dominated on his Patrik Diethelm board plus his North Sails. Gabriel used the Starboard HWR and NP sails. Most of the sailors were using Kashy fins and Starboard Formula boards. The sails were mixed with NP and North sails dominating. 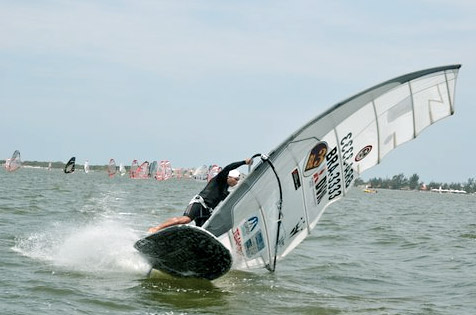 Paolo dos Reis, the number 1 from Brazil in the Formula discipline (Pic: formulawindsurfing.org)

Xavier Ferlet, who finished in second place in the Masters class and had a good fight with Brasilian racer Mathias Pinheiro, stated following comments on the event:

“The Formula Youth & Masters Worlds were a very  nice event. Araruama in Rio state delivered all conditions. It was mainly windy (20 to 30 knots), but we also had a couple of light wind races on the last day around 9 knots. We did the full quota of 15 races with a rest day so it shows how good the conditions were. The rest day was great to discover Rio which is a beautiful place.” 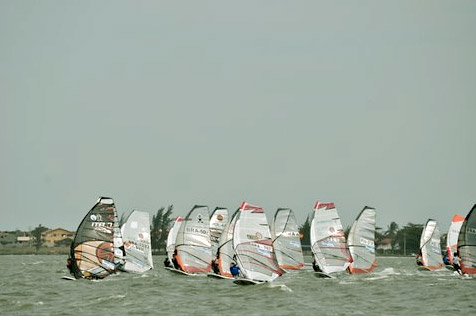 Some seconds after the start at one of the 15 rounds (Pic: formulawindsurfing.org)

Gabriel Browne from Fortaleza, who decided to focus on his work and education in 2010 and only competed in one PWA Slalom at the Costa Brava, was on form and dominated the Formula Youth class. Gabriel sent us following statement about the event in his homecountry:

“We finished last Saturday the Formula Windsurfing Youth, Master and Formula Experience worlds.The event was held at the Upwind Center, one of the biggest windsurfing centers in Brazil, at Araruama lake. The lake is around 2 hours in easterly direction from Rio de Janeiro, nearby the Cabo Frio. Many competitors from all over the world including Peru, Chile, Poland, Finland, Italy and others. The first day of event we had an exellent southwest wind, around 20knts in the first races with gusts up to 25 knots. I had a good day and won all 4 races of the day in the Youth fleet. The second and third day of event as very similar with strong  northeast winds. Again I did some good races and manage to win 7 of the 8 races in two days. On the last day of the event I won the first  race and just after the finish line I broke the tip of my sail. The wind was very light for the next 2 races and I didn’t have a big sail to use. So I decided to stay at the beach. In the youth Fleet the second place was Jacek Piaseck from Poland. He was sailing really good without mistakes and with good board speed. The third place went to Maciek Rutkowski, who is also from Poland and did compete in several PWA slaloms this season. I would like to thank all the competitors that came to Brazil for this great event. Now I’m back in Fortaleza, my hometown and getting ready to the FW nationals and also the Wind Brasil FW grand-prix.” 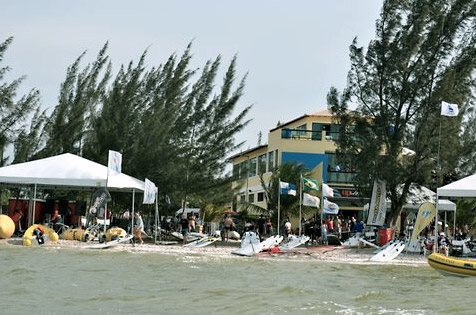 The center, where the riders stored and prepared their gear (Pic: formulawindsurfing.org

Just one correction.
Nicolas Schreier won the overall FE Class for the third time (2008-2010). On Ladies Carolina Butrich took the title and on Youth Sebastían Aguirre was on the top too. The three of them are part of the peruvian team.