The wind dropped after having massive conditions on the 8th of September at Ravine Blanche, Reunion. The 16 riders scored high in over masthigh walls of water. After three full rounds sailed the team of Pichot, Fernandez, Taboulet and Sifferlen are in the lead with 34 points in front of the team consisting of Voget, Godet, Caste and Jubon, who could collect already 31 points. A fourth round for sure would be exciting and could eventually bring a change. 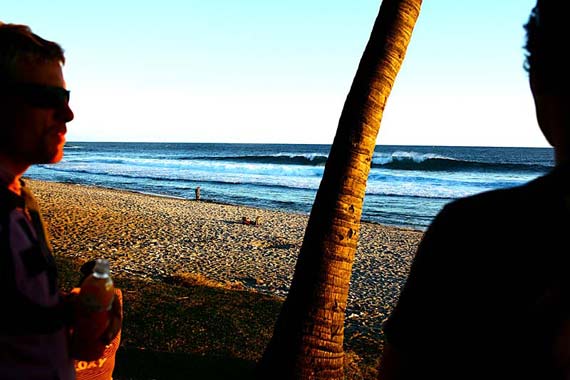 A nice break late in the afternoon (@ Calvet/ reunionwaveclassic.com)

Klaas Voget, one of the best wave sailors of the event so far, stated after the massive day: “This is my second  participation in a “Wave Classic” contest after my first one on Fuerteventura in March 2009. Ravine Blanche is pretty hardcore. The rocks are gnarly and the sections are super powerful with sea urchins all over the place ! But I had a lot of fun during my heats in super clean waves. It reminded me a little bit on Cabo Verde in the good days, just with the wind from the other side. I hope now we can get another session in Etang Salé, because everybody destroyed a lot of gear while the last days at Ravine Blanche. If we sail up there more, we probably have no more equipment to sail on the next days ! “

The conditions dropped and the crew tried to start round 4 at a less brutal spot, called Etang Salé. But the wind dropped totally and did not show so far. 2 more days are left to get any rounds done. In the meanwhile the riders explored the island, went for cliff jumping at waterfalls, chilled out at the beachparks, had fun on the slackline and went for parties.