Marrawah, Tasmania, August 19, 2013 – Tasmania really turned it on with two days of mind- blowing windsurfing action for the second mission of windsurfing’s most-challenging contest. After three more rounds of competition on the second mission day in over 45 knots of wind and double mast-high surf, Thomas Traversa, Dany Bruch, Leon Jamaer and Marcilio Browne qualified for the third and final mission, where the ultimate Red Bull Storm Chase Champion will be crowned. 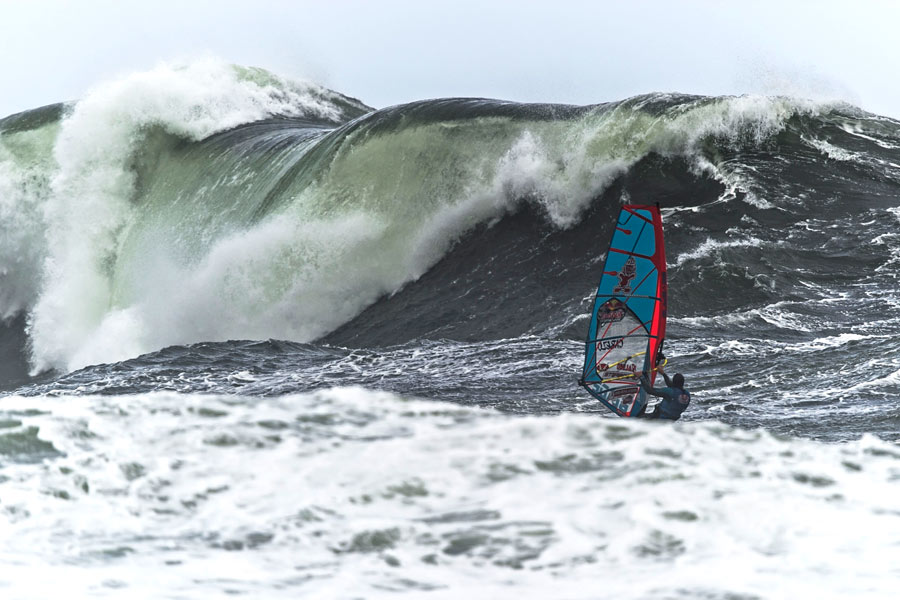 THE MORNING & FIRST ROUND

After an incredible night of 85-knot gusts, an awe-inspiring day’s action in storm-force winds and huge surf ensued. Arriving at ‘Back of Lighthouse’ (BOL) – near Marrawah on the North West coast – first light revealed a gnarly, squally Great Southern Ocean with waves in the nine-metre range. It’s true to say everyone was apprehensive before hitting the water.

After assessing the magnitude of the conditions, Red Bull Storm Chase Head Judge Duncan Coombs opted for three-man heats of 30-minute duration at the thumping left-hand reefbreak of BOL. As soon as the first round kicked-off, it became clear that something special was going to happen. The seemingly fearless Frenchman Thomas Traversa, who led the Mission #2 scoring overnight, immediately tore into the massive, hollow walls that BOL served-up, with all of his wave rides in the ‘excellent range’ of between 7 and 9 points. Smacking the heavy sections with such ferocity, the 27-yr-old from Marseille set a new standard in windsurfing with the aerials that he subsequently soared into. Despite weighing just 60 kilos, Traversa showed that he is a true heavyweight contender.

Seeing Traversa’s go-for-it attitude in the heavy conditions set off a wave of daring manoeuvres from the rest of the fleet. They then unleashed a barrage of crazy double forward loops, back loops and heroic punts off-the-lip from double-mast-high waves. Since joining Mission #2 as an injury replacement for Robby Swift and fellow alternate Boujmaa Guilloul, Germany’s Leon Jamaer impressed by taking-off deeper than anyone else and riding in the most critical sections of each wave, with a highest wave score of 9 points for one of his late hits. After wrecking his gear on the rocks on day one, Jamaer’s compatriot Dany Bruch launched into insanely high, stalled forward loops – one of which earned 5 bonus points for the most airtime – and sliced into the surf with incredible energy with his cumulative points coming from both jumping and riding. Daniel Bruch: „I’m stoked! It was so hard out there. Everyone was ripping it up. I’m happy to advance to the final Mission of Red Bull Storm Chase and scored second best here. I was so overpowered that it was hard to hang on to 4.5 after I broke my gear yesterday. Now I’m super-psyched and keen for Mission #3.“ 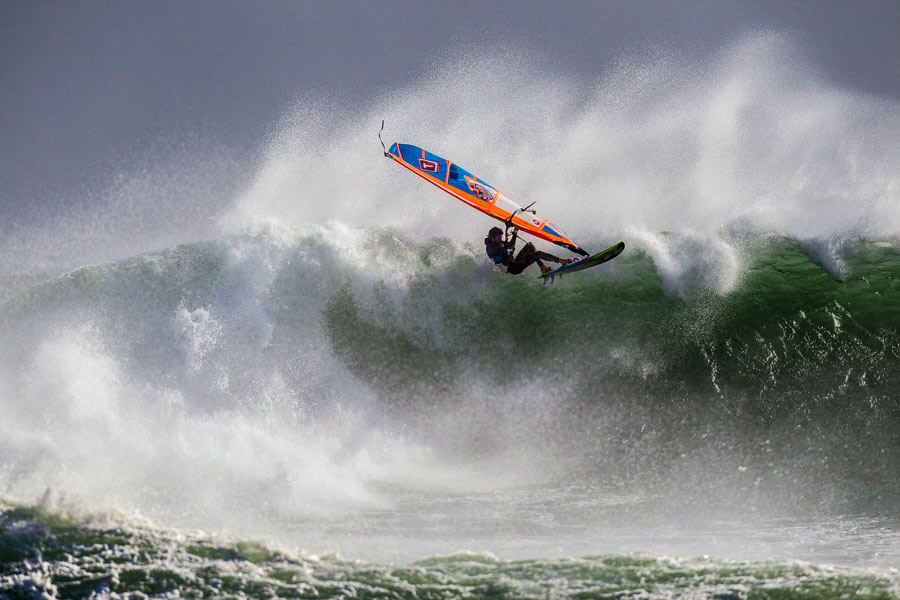 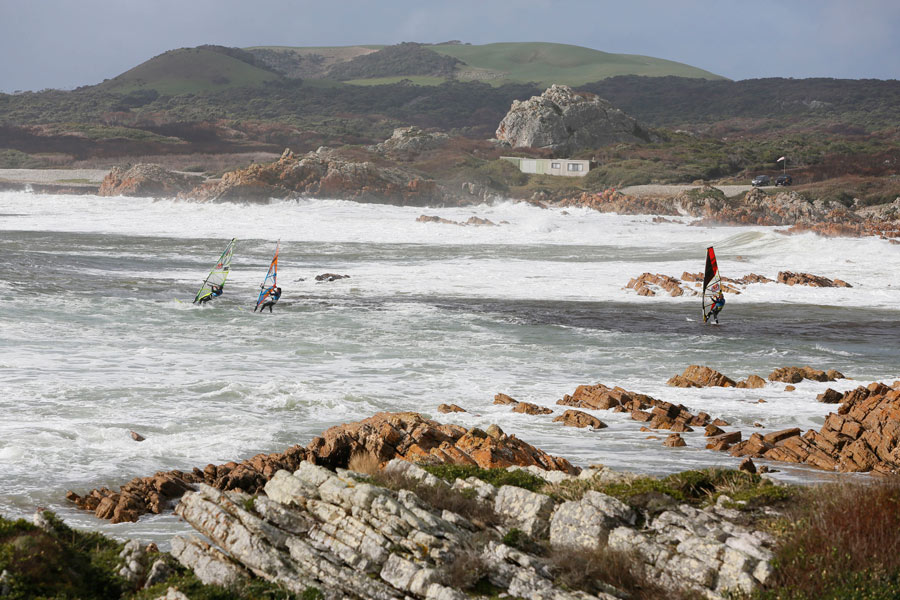 Blown-away by the standard on the water, Head Judge Duncan Coombs immediately sent the sailors out for a second round. While Traversa continued to excite the onlookers, the rest began to up their game as well with huge double-forward loops coming from the likes of Brazil’s Marcilio Browne and Spain’s 2010 World Champion Victor Fernandez, who posted 9.5 points for his cleanly landed double. Unfortunately for the Spaniard, his wave riding scores let him down. Julien Taboulet of France also joined in with a jaw-dropping back loop off a double-mast-high face. As the show of one-upmanship escalated, for each heroic move landed there were at least three spectacular wipeouts as rivals fell out of the sky or were pummeled onto the savage BOL reef. 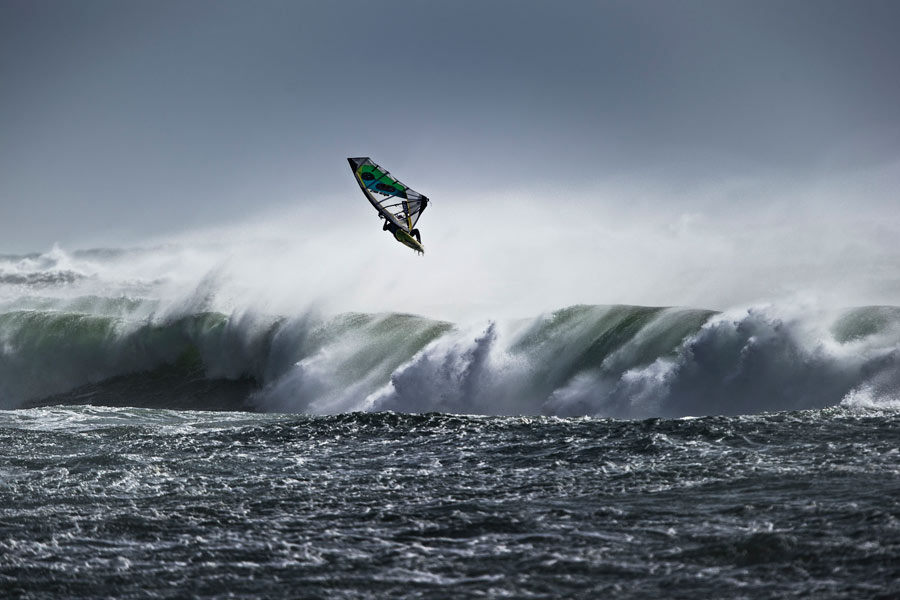 A third round of storm-force conditions – often with bright sunshine as the icing on the cake – saw the battle to qualify for the final Red Bull Storm Chase mission intensify. Wrecked gear and harsh poundings were the evidence of everyone’s effort in windsurfing’s most-challenging contest.

Speaking of the level on the water Duncan Coombs said: “For storm conditions, this was as good as it gets. It’s the best windsurfing I’ve ever seen. We came to Tasmania for a full-on ‘out there’ experience and the North West coast was always going to be about waves in the XXL range with some of the largest surf I’ve ever seen, which definitely made the journey more than worth it.”

After tabulating their overall scores of the best waves and jumps from the two days – including bonus points for both the highest – the judging panel consisting of former World Champion Scott McKercher and Sports & Athletes Manager Klaas Voget delivered their verdict. At the finalists’ announcement Duncan Coombs mentioned how close the struggle for the final four tickets to Mission #3 had been.

The top four sailors from the second mission will compete in the third and final mission.

Only Mother Nature knows when and where Mission #3 will visit before the end of the year. But one thing is for sure, as soon as a suitable storm is likely to hit one of the seven nominated locations, the crew and athletes will be ready to strike within 48-hrs notice.

If you want to see more pictures or the video from the Storm Chase, click one of the links below.

[…] Traversa has won the second mission of the Red Bull Storm Chase in Tasmania. The 27 year-old Frenchman from Marseille scored excellent points for his waverides. […]

[…] Marrawah in Tasmania really turned it on with two days of mind- blowing windsurfing action for the second mission of the Red Bull Storm Chase. After two days of competition in howling winds and double mast-high surf, Thomas Traversa, Dany Bruch, Leon Jamaer and Marcilio Browne qualified for the third and final mission, where the ultimate Red Bull Storm Chase Champion will be crowned. Read more. […]

what the hell, hope your not serious