Brandon Bay, Ireland, January 28, 2013 – 10 of the world’s best windsurfers from eight countries completed a demanding competition in Kerry, Ireland during the first mission of the Red Bull Storm Chase – the most-challenging windsurfing contest of all time. Despite recorded storm-force gusts of up to 74 knots (137kmh) and fierce 20-ft waves, the sailors completed three rounds of competition in two locations on the Maharees peninsular. After possibly the most radical day in windsurfing history, Marcilio Browne, Dany Bruch, Victor Fernandez, Robby Swift, Julien Taboulet and Thomas Traversa advance to the second Mission of Red Bull Storm Chase.

Thomas Traversa: “It’s hard to describe how windy it was – there was way more than I ever anticipated. I saw that everyone was about as out-of-control as me, but we all tried our best, nobody complained and the most important thing is that everyone is safe. I like the contest format a lot and I think that for Mission 2 we’ll all be more prepared, relaxed and will know what to expect. I don‘t think it could really be any windier and still possible to sail – but I have a 2.5 that I’ll take on the next one for sure!” 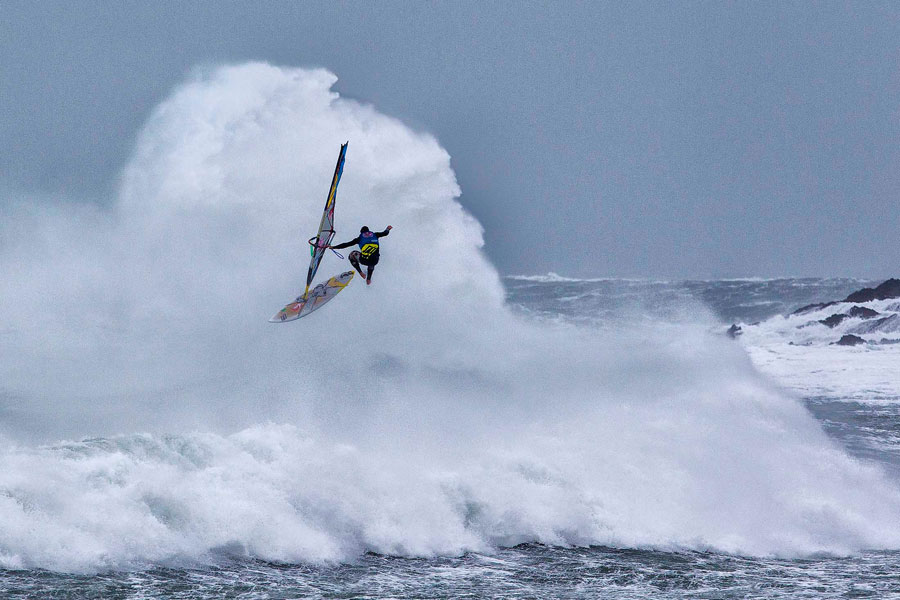 Julien Taboulet: „I was so happy to be selected for this first storm, plus it was important to be in Ireland in honour of Mikey Clancy. It was my first time in such strong wind – it was impossible to even waterstart sometimes. For sure we scored it big-time! I’m happy to make the cut for Mission 2 especially as it’s been such a long time since I competed, so it’s a great feeling to advance.

Kicking-off at first light, the Professional Windsurfers’ Association (PWA) World Tour Head Judge Duncan Coombs, Red Bull Storm Chase Sports Director Klaas Voget and local Guest Judge Timo Mullen decided on a 10-minute heat format, with each competitor’s best scores in both wave riding and jumping counting. Five two-man heats were drawn and the tension rose as the enormity of the task ahead of the sailors sank in at a Brandon Bay beach known to windsurfers as ‘Dumps’.

Barely able to walk their equipment down the beach even the most experienced windsurfers present questioned if even launching was possible. First to make an impression was 23-year old German Leon Jamaer who launched into a barrage of high, floaty jumps and wave rides among the endless walls of white water and open wave faces topping 20ft. Another European, Thomas Traversa managed to throw in a perfect wave 360 over the savage shore-dump to the judges’ delight. The French sailors proved to be on-fire as Julien Taboulet raised the bar with a barrage of sky-high combo jumps such as extreme, delayed table-top forward loops. Germany’s Dany Bruch also notched a table-top forward and scored the most hang-time with a stratospheric jump as lasting seven seconds. Moroccan aerial specialist Boujmaa Guilloul got in on the act too with the full gambit of forward and backward combination rotations. With only borrowed gear due to airline delays, it was a frustrating day for Danish talent Kenneth Danielsen who struggled to show his full potential without familiar equipment in the testing environment. 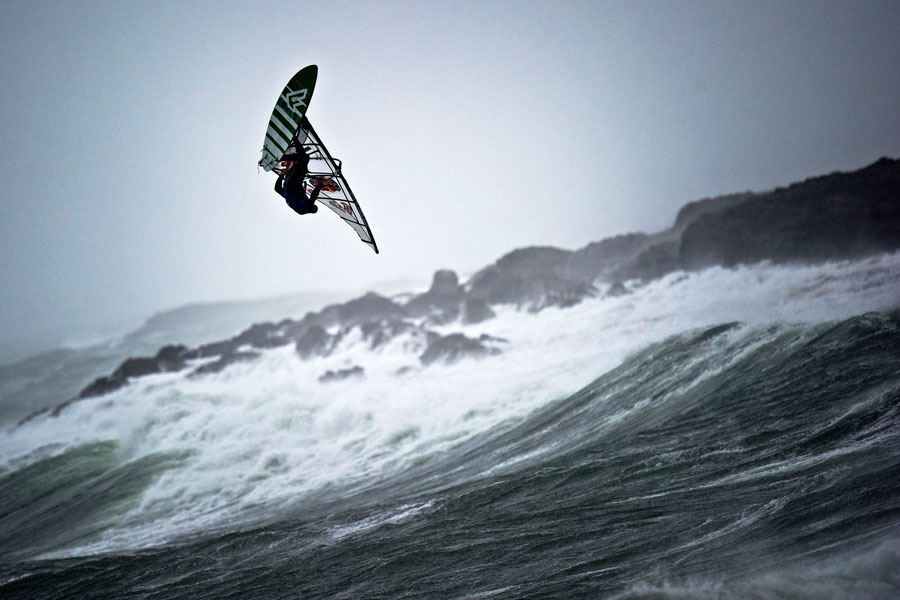 Although the entrants were throwing caution to the wind both on and above the water, they were all issued with padded ION impact protection clothing and were equipped with Weatherdock GPS devices delivering real-time tracking. Watching over them during heats were expert Sea-Doo Personal Watercraft safety drivers while a storm-proof Heimplanet tent provided shelter on the beach as raging gusts of cross-onshore wind and hail showers ripped through..

With several former World Champions in-the-mix, the standard of competition would be pushed even further. Robby Swift (GBR) made the benchmark move of the contest with a perfect, dry-landed, pushloop-forward combo. More adrenaline-fuelled moves followed and Brazilian Marcilio Browne wowed the judging panel with a technical and stylish Goiter rotation during a wave ride – especially impressive considering the difficulties involved in making genuine turns in such strong wind. After two rounds and a GoPro Expression Session free-sail, the judging crew then threw in another challenge by re-locating to the sideshore wind and bone-crunching reef known as Hell’s Gate. 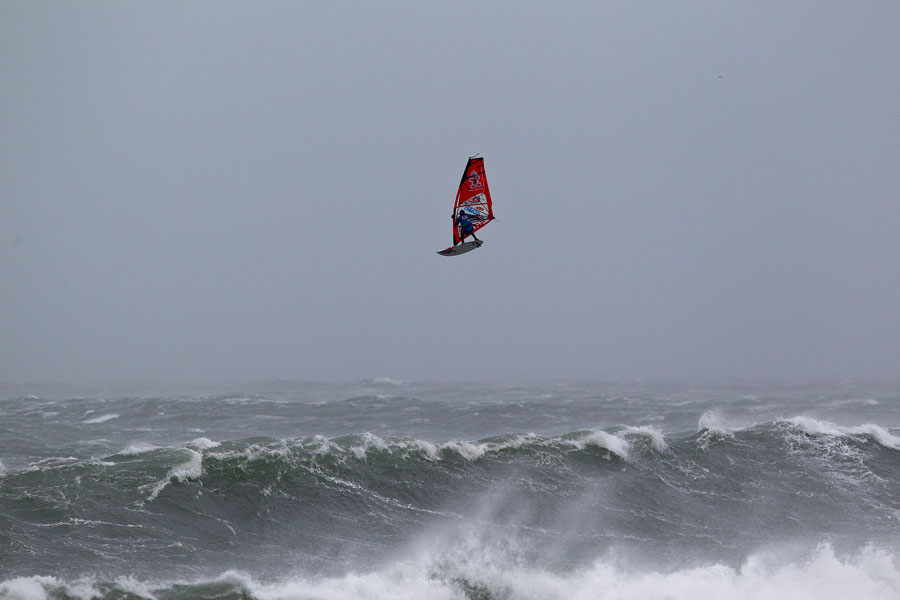 Dany Bruch: „It was definitely windier than we could’ve been imagined and the windiest conditions I’ve ever experienced – it was stormy for sure! The contest itself was a cool format with all of us being good friends and able to push and motivate each other. It was super-hard to score well – if you could land one good jump and compete a wave ride you had done well. We all had fun and appreciate having been a part of it.“

Mast-and-a-half high waves exploded onto stone as the sailors coped with wind gusting from 40-74 knots. Now fenced in by treacherous rocky islands and cliff-edged shoreline a different test was on the table. As they dodged closing-out set waves in the third and final round, timing was critical to scoring a steep ramp with adequate speed in the run-up. This was no problem for Tenerife-based Dany Bruch who threw down an enormous, extremely delayed forward loop and calmly posted a backside 360 on a wave. Julien Taboulet showed little fear as he flew off thick slabs of water and carved the powerful surf to shreds, as did Thomas Traversa and Robby Swift who both landed combination moves. In terms of overall impression the pedigree of the two waveriding World Champions present – Victor Fernandez (ESP) and Josh Angulo (CPV) – shone through brightly. Both displayed superior wave selection with linked turns and aerials conjured out of nowhere. As the light faded the six highest scoring sailors to successfully qualify for Mission 2 – Dany Bruch, Marcilio Browne, Victor Fernandez, Robby Swift, Julien Taboulet and Thomas Traversa – were paraded as an unforgettable day came to an end.

Robby Swift: „It was way windier than all of us expected and it was definitely the strongest wind i’ve ever sailed in. This was a great experience and I was over-the-moon to score the highest-scored jump of the event, even though I broke a board. The contest format was cool, with great variety and a nice change from the stress of a regular week-long contest, but it was all over so fast. I can’t describe how happy I am to make it through to the next Mission.“

The top six sailors from the first mission will compete in the second mission. 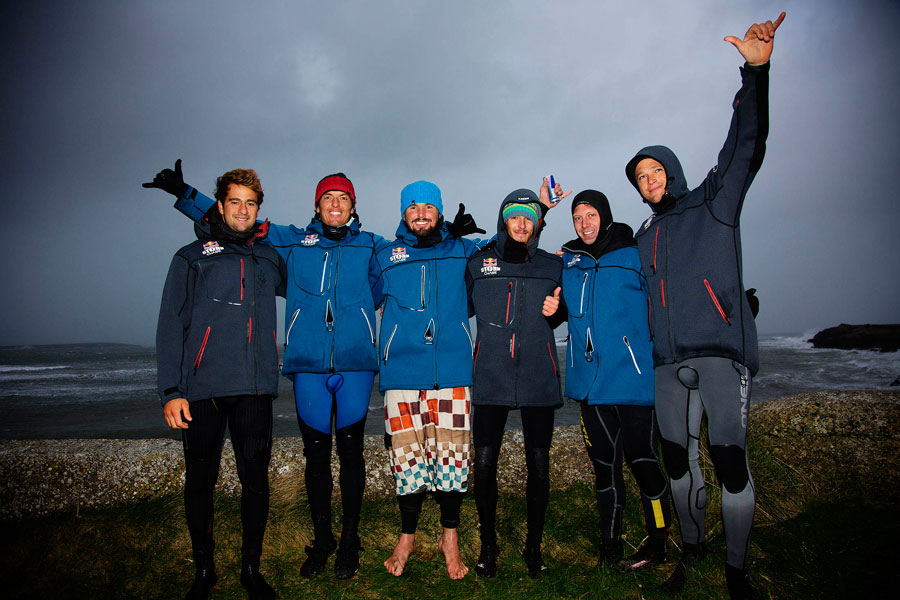 […] winds speeds of over 70 knots and 20-ft plus surf, the first mission of the Red Bull Storm Chase to Brandon Bay, Ireland was a blast! After an outstanding contest in […]

Great contest!!! Congratulations to all of the riders for having a go in those conditions! Oh by the way today was bit breezy as well 3.0 was in use 😉

Who the hell is Julien Taboulet from SPAIN?

A big thank you to all those who took part and organised this radical event in Brandon Bay.My wife and I attended as the event was dedicated to Mikey our beautiful son who passed away and we went to honour his memory.The conditions were great …a real Irish Storm and the 10 guys all braved the conditions like true professionals .Josh Angulo spoke at the results ceremony about his friend Mikey who had been caught up in a storm in life and was a true waterman whose memory will never be forgotten.We want to thank everybody we met at this… Read more »

I have been living in Ireland vicariously through Mikey, and am pleased to hear that there was a special ceremony in honour of Mikey. Best wishes to you and yours
Kevin O’Shea
NY NY
Kevin Roberts on facebook, my middle name. if you come to NYC, look me up and we’ll have a pint!