Day 5 saw the first elimination in the Slalom discipline at the PWA World Cup on Sylt. A bit after 10.00, the air felt still cold, heat number one got started in 8 to 15 knots of wind from north easterly direction. 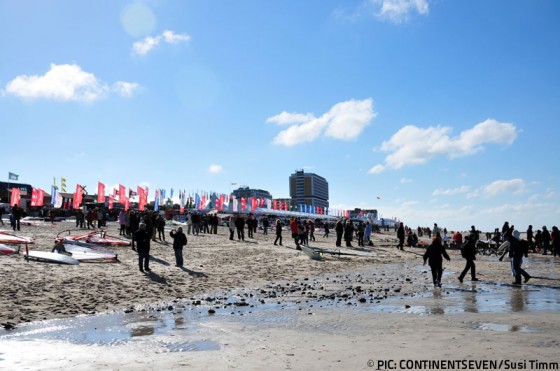 Blue sky on the 5th day

The racers were on fire after several days of no action. Several over earlies happened already in round 1 and 2. Gunnar Asmussen and Dan Ellis were the biggest names in the first round, who passed the starting line too early. In round two, the top 32 are left, one of the top names started to early: It was Finian Maynard, who is fighting for a overall podium result, Also Pawel Hlavaty, who tries a comeback on the PWA Slalom circuit, got a PMS. In the remaining 4 heats all went good with the starts and 7 big names made it into the final: Albeau, Dunkerbeck, Cyril Moussilmani, Diaz, Buzianis, Pritchard, Van der Steen. And Alberto Menegatti, who seems to have a flow since his great result in Alacati. 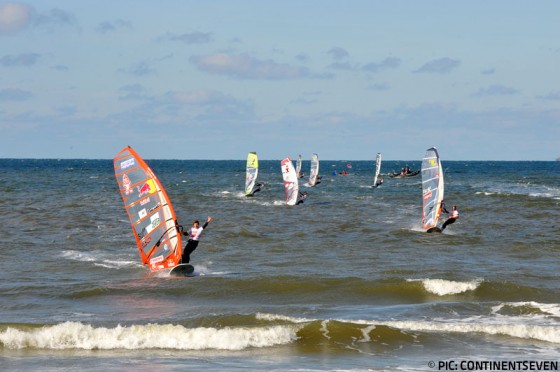 Björn gets his first bullet

Björn Dunkerbeck nailed a perfect start on his biggest gearset and showed up first at the first jibe mark followed by 2010 Slalom worldchampion Antoine Albeau.

The 40 times world champion could hold off Antoine on the rest of the course and won the first elimination here at Sylt. In second came Antoine followed by Jimmy Diaz and Alberto Menegatti.

The B-final was won by Ross Williams. See the full result here!

Exactly after the final heats the wind dropped and the competition was on hold till the end of the day. The people enjoyed the sunny weather with blue sky. The windforecast for tomoorrow predicts easterly winds, which will be maybe too light. The skippersmeeting for all disciplines will be held at 10.00.