Steady 6 -7 beaufort and 2-3 m high waves made a worldclass full single elimination for the ladies and men possible. The two Spaniards Alex Mussolini and Iballa Moreno are the winners of this single eliminations in hardcore Sylt conditions. 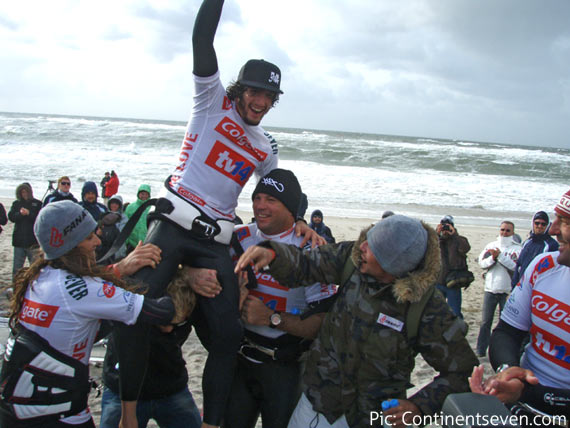 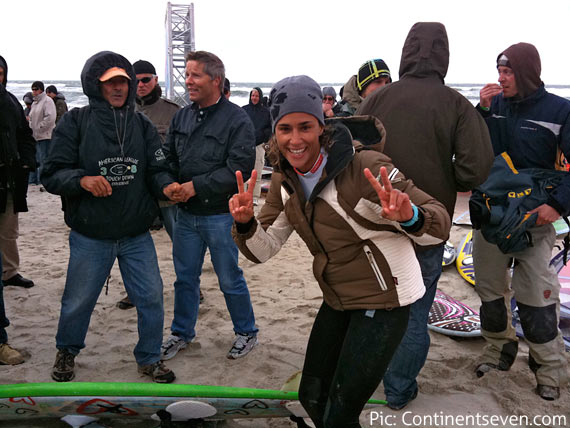 The windforecast came true. From the early morning on the wind was blowing onshore with 20 – 30 knots and pushed 2 m high waves towards the beach of Westerland. The first heat got started around 8.00 am.

In the second round we already saw some little surprises. Big names like Jason Polakow, Jonas Ceballos, Dario Ojeda, Philipp Köster, Dani Bruch or Ross Williams did not advance. Some other sailors on the other hand surprised, like little waterkid Kai Lenny who was in favour of the winddirection or the slalomworldchampion Antoine Albeau, who seemd to sail like in a flow.

We did not see many double moves today, but a lot of difficult airstuff, like tweaked pushloops, high pushloops, stalled forwards, tabletops, crazy Pete´s, Forwords of the lips, Backloops, Backside aerials of the lips, Backsidewaverides with frontsideturns and we saw of course massive Crashes. Some masts could not resist the power of the massive white water walls. 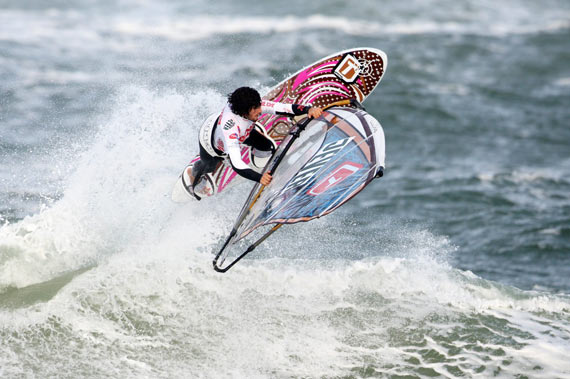 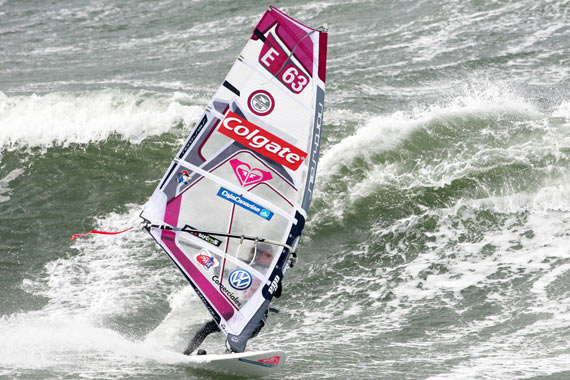 In the fight for the top 8 of the men Campello, Lenny, Baker, Traversa, Pritchard, Voget, Taboulet and Volwater got knocked out. And Albeau was still in. The quarterfinals followed and it got tougher and tougher. An amazing sailing John Skye kicked out the wavetitle favourite Kauli Seadi with a brilliant heat. Josh Angulo was as well on fire, had a great waveselection and was riding the massive onshore waves super vertical and took a lot of risk sending superstar Marcilio Brown back to the beach. And Alex Mussolini took advantage over Swift and Albeau over Fernadez.

In the loser´s final we saw a dedicated sailing Albeau. John Syke did not find the best waves and could not replicate his great heat from before.

After this heat the winnersfinal got started. It seemed the waves went down a bit but Alex Mussolini still found ramps to show his great jumping skills.

The ladies fleet is very manageable but still the top ladies show great waverides and jumps. In the final between Iballa and Daida Moreno, Iballa showed the better waveriding than her sister and could jump with her show on the top of the podium.

The plan is to continue with the ladie´s double elimination tomorrow. The windforecast for the weekend is still very impressive with 35 knots onshore wind and massive swell.

Result Men after one single elimination:

Result Women after one single elimination:

medea2009-10-04T17:59:31+02:00October 1st, 2009|
Subscribe
0 Comments
Inline Feedbacks
View all comments
This website is using Google Analytics. Please click here if you want to opt-out. Click here to opt-out.
0
0
Would love your thoughts, please comment.x
()
x
| Reply
We use cookies to ensure that we give you the best experience on our website. If you continue to use this site we will assume that you are happy with it.OkNoRead more