The Bonaire gang ruled this first freestyle elimination and braved the elements on Sylt. Wind, waves, coldness and pouring rain. It was an extreme day: Freestyle in super hard onshore conditions. Kiri Thode, a flatwater expert normally wins the single elimination and then Frans on top after the double elimination. 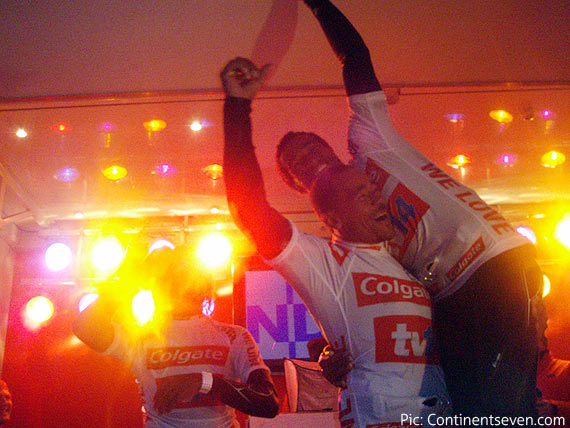 The brothers Tonky and Taty share the success - Pic: Continentseven.com

Taty Frans was the protagonist of this wild afternoon, when the wind picked up to 25 knots and heavy rainshowers kicked in the beach of Westerland. At 7 pm he exploded and opened the all deciding heat with a 3 meter high Shaka and continued with a firework of moves, who all looked so impressive because of the scenery. A wall of water moved towards the beach and seemed to push Taty to a 100 % performance. Kiri tried to fight as well, but had crashed his fin before the heat at the rocks. He also felt, that the conditions were really extreme. Check out Taty´s heat in full length here.

Congratulations to both of them and especially Taty, who could win his first double Freestyle elimination on the PWA tour since he is on the tour.

Tonky Frans made it on the podium as well kicking Gollito out on his way back to the top.

Taty leads the event at Sylt right now and Gollito Estredo keeps the lead in the overall ranking in front of Kiri Thode.

We were on the beach filming the final heats. So, stay tuned for some videoaction.