Today was the first day of the PWA World Cup Lanzarote at the Costa Teguise. After the registration in the morning the first possible start was scheduled for 14.00. The wind definitely picked up, but only in gusts and dropped very soon again. Most of the top guys showed up on the water. Gollito Estredo and Taty Frans impressed most and pulled out tricks with high difficulties in the light wind. Also Gollito landed a new move, which is a kind of Bob back to sail variation. You can watch it here. He still is thinking about the name of the move. 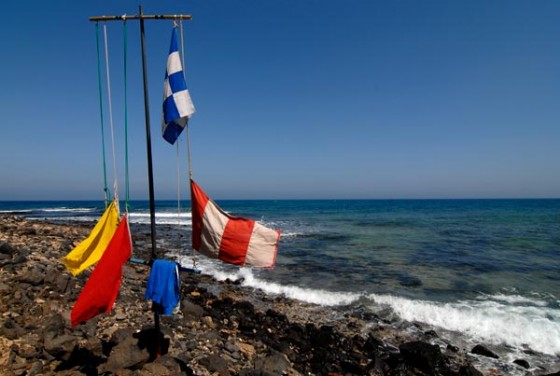 The flags were not moving much today - Pic: Continentseven.com

Later there was a supersession started for the audience, where Gollito was against Taty and Kiri against Tonky. The two winners would advance to the final, but heat 1 never got finished. We measured 4 knots average windspeed during the heat Gollito against Taty and both could show a Grubby before the heat was abandoned.

The Skippersmeeting for tomorrow is scheduled for 9.30.