Day 3 at the Lanzarote PWA Freestyle World Cup, the second tourstop in this discipline in 2010, started cloudy and with very light winds. While the previous days the wind always started around 13.00 to 14.00 o´clock. But today the wind stayed calm for almost all day long, but the Atlantic ocean looked a bit rougher. Around 17:30 the northerly wind was building up again and the semifinals in the men´s category got started at 17:40. 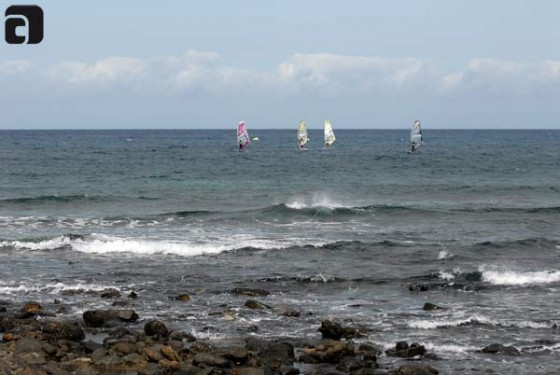 The judge crew had to leave the judging container and sit a bit further left on the big vulcanic rocks to judge the heats. The race crew of the PWA had changed the competition area further to the left because of the super offshore wind conditions. The conditions were extremely gusty. 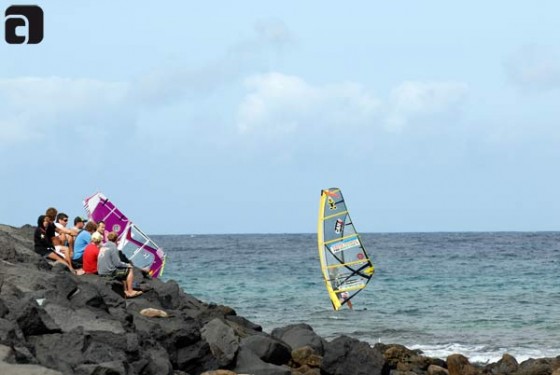 Judges on the rocks - Pic: Continentseven.com

Gollito Estredo could defeat Tonky Frans. The Venezuelan nailed a normal Chacho onehanded in the tricky conditions. Kiri Thode made it into the final as well against Phil Soltysiak, who sailed very strong as well in the tricky conditions. The tricks, which were shown by the top 4 guys, were very impressive although the wind was so unstable. Kiri Thode will meet Estredo in the winner’s final, and Tonky Frans will sail against Soltysiak for the third position.

The ladies final between Yolanda de Brendt and Sarah-Quita Offringa got started several times. There was alsa a bit of confusion on the water when suddenly the men´s final and ladies final wre sailed parallel. But looked quite nice from the beach. But all the heat , which got started got cancelled. So we did not see any more results after the men´s semifinal run.

One more day is left to sail at least the 4 missing heats of the first single elimination in the ladies and men category. Skippersmeeting is scheduled with 9:30 and the first possible start could be at 10:00. Keep the fingers crossed to see some more action tomorrow!!

Watch the statement of the race director Duncan Coombes about the today´s action here at Las Cucharas: