Day 2 at Lanzarote saw 12 to 20 knots of wind and the first single elimination for ladies and men could be started. Almost both could be finished. In the ladies single 2 heats and in the men´s fleet three heats are missing for a full result only. 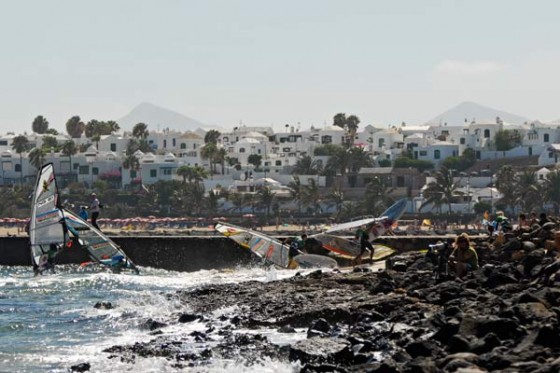 Around 13.00 the wind picked up and was strong enough to start the 2010 competition on the water. At 13.20 the first heat in between Björn Saragoza and Davis Teran Paternine was on. Björn was on fire and kicked out top favourite and Podersdorf winner Taty Frans in his second heat, Davy Scheffers in heat 3 and got stopped by an incredible save and stylish sailing Phil Soltysiak. Björn landed wild Air Funnels and was the surpris of the day.

Joao “Janjao” Henrique Barros Ferreira was another young sailor, who surprised today with a strong performance. He sent Leo Ray and Nicolas Akgazciyan back to the beach, but got stopped by a very explosive sailing Kiri Thode. Kiri, who landed a lot of double combinations like Airbob into Bob or Spock in Burner, made it easily in the top 4. Phil Soltysiak, who won against Bosson, local Oteagui and Saragoza also made it into the top 4, which is so far his best performance at a PWA freestyle event. 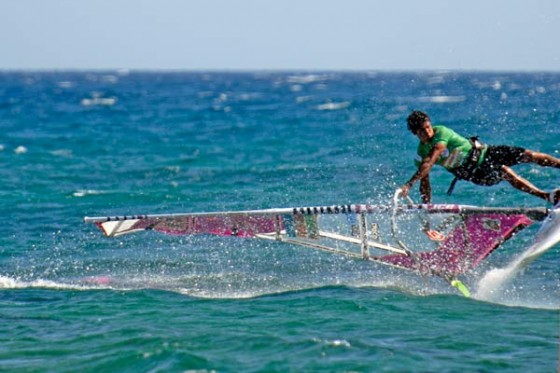 On the bottom of the ladder an incrdible sailing Gollito Estredo and a very stylish sailing Tonky Frans were the guys, who made it into the top 4. Tonky had to sail in the quarter final against a very strong Steven van Broeckhoven, who convinced with extremely safe landed powermoves. But Tonky was better this time. But Steven has definitely the potential to challenge everybody in the Double Elimination.

Yegor Popretinsky, who missed the freestyle event in Austria, proofed his qualities today and sailed in the quarterfinal, where he got stopped by Gollito, who is definitely on fire. Inverted Airflakas, high Shakas, clean Konos, Skopus, his new Matador…Nothing is impossible for the World Champion.

The semifinal, Phil Soltysiak against Kiri Thode and Tonky Frans against Gollito Estredo, got started at 17.11, but had to be cancelled at 17.15 due to the dropping wind. 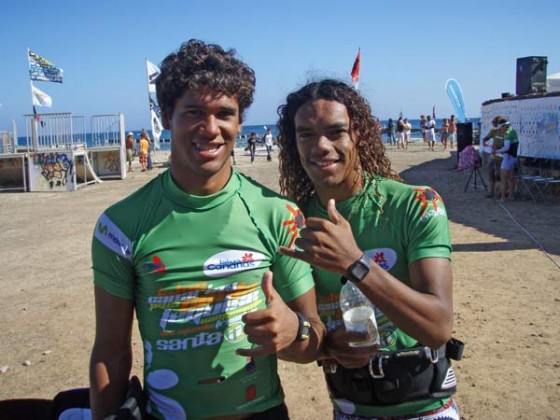 What´s the conclusion of the day about the men´s single elimination?

The level is incredible high, especially by young sailors like Saragoza or Barros Ferreira. Taty Frans lost against Saragoza in tricky conditions. The wind was very unstable in many heats and the sailors could not sail too big sized sails, because there was always the chance that the wind picked up. Most of the riders were on 5,0 – 5,5 m sails. Top names, like Gollito, Kiri and Tonky made it into the semifinal. Phil Soltysiak was another surprise of today and also made it into the final. We can expect a tough heat for the victory in the single elimination. 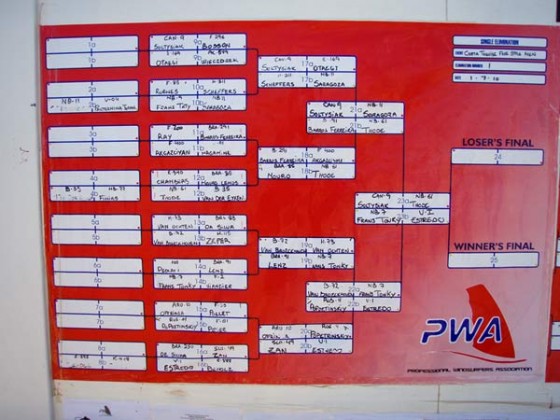 Sarah-Quita Offringa sails on another level. Daida and Iballa Moreno quit the freestyle discipline. Yoli de Brendt, who sticks many new school moves like Clewfirst Puneta, Eslider, Flaka, Shove it very save and made it together with Sarah- Quita to the final. She could defeat Olya Raskina and Maui based Junko Nagoshi, who improved her freestyle a lot since last year. But she will have a hard time to win against Sarah-Quita, who dominates the discipline landing Airfunnels, double Flakas, Eslider Diablos and many more. 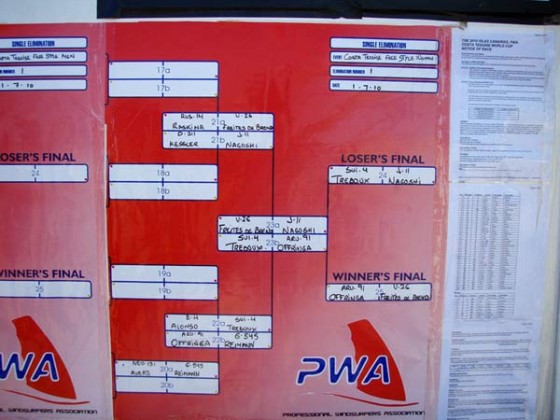 Tomorrow´s skippers meeting is scheduled for 9:30 and the first possible start for 10:00. Let´s see, if there will be winners of the first single announced tomorrow and perhaps a double be started!

denk amal auf gut deitsch is des a bissl a verdrahter airflaka 😀
would like to see one on video!!!

Thanks to C7 for reporting again!

One question: what are “Inverted Airflakas”?