The final day of the PWA Bonaire World Cup provided another fantastic day of freestyle as the second double elimination was completed. With winds lighter than yesterday the majority of sailors reached for their 4.8-5.2m’s as they battled it out for the final time this week. Several sailors came storming back through the doubles but in the end no-one could stop Kiri Thode from fighting back to claim victory on his beloved Bonaire. Meanwhile, Sarah-Quita Offringa claimed a throughly deserved victory in the women’s, remaining unbeaten yet again, after a phenomenal display of sailing.

Congratulations to all winners! We are stoked to see Continentseven’s Amado Vriewswijk and Maaike Huvermann on the podium. Dieter van der Eyken was damn right with his preview of the podium finishers. 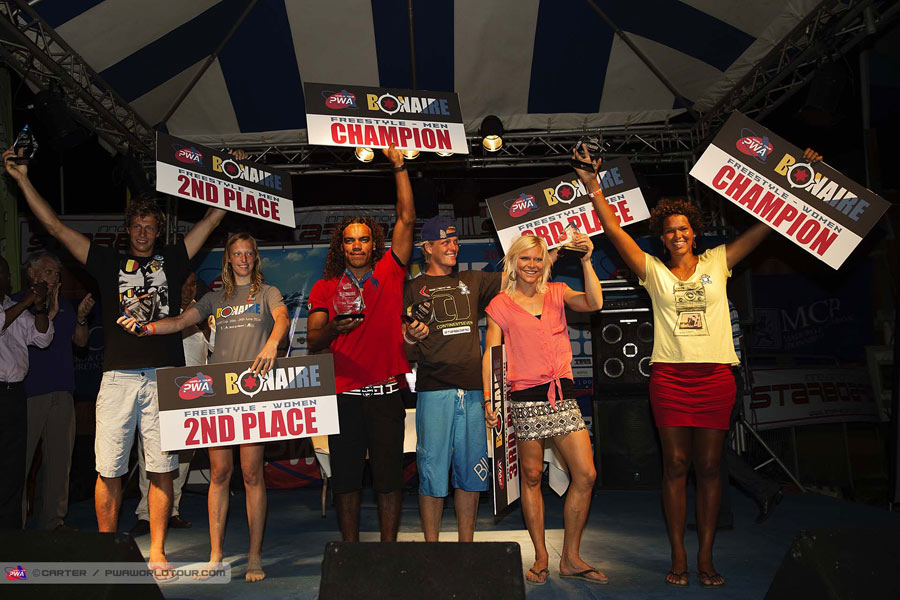 was a sick show btw

And, where are the results of the second double elimination ???

So many questions, but we are not on Bonaire.

You can re-watch the live stream on the PWA Youtube channel: https://www.youtube.com/channel/UCOB78Rzf1zE7a9d8DNLx6VQ
Final & Super final of the 2nd Double Elimination between Kiri Thode and Gollito Estredo filmed by Kuma: https://www.continentseven.com/2014/06/25/pwa-bonaire-the-final-kiri-vs-gollito/

Links to the Eliminations. Amado won against Gollito in the first Double Elimination, so Gollito was behind Amado.