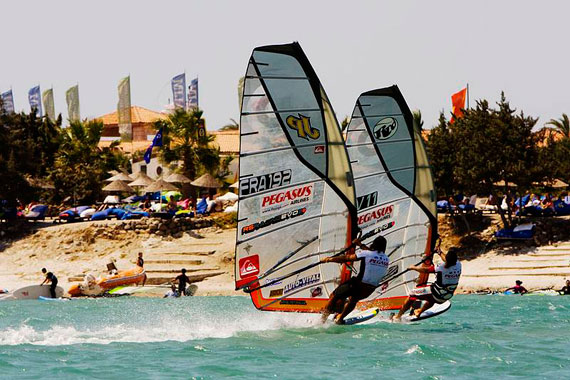 The first race of the day, race 7, was started at 11 in the morning and saw Finian Maynard finally winning. This time Maynard managed to fend off Antoine Albeau, who was trying hard to make pressure on him. Finian came first over the finish line. With this victory he could overtake Björn Dunkerbeck in the overall result. Dunkerbeck had an dissappoint day, by missing twice to advance to the Semis.
Race Nr. 8 was won by Antoine Albeau. Kevin Pritchard, who seems to find his form again came second and Finian Maynard third. 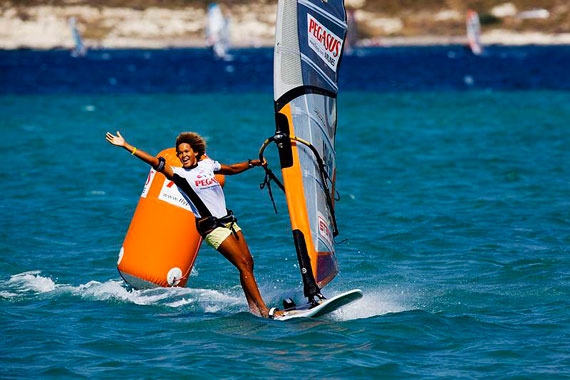 The race 7 was again business as usual for Valerie Ghibaudo by winning it easily. But race Nr. 8 saw a new face winning: Sarah Quita Offringa. She was leading the race from the start to the finish, although Ghibaudo was on her tail during the whole race. This was the first victory for Sarah in a PWA Slalom competition and put her now on the second place overall. > Video

medea2009-08-14T23:50:46+02:00August 13th, 2009|
Subscribe
0 Comments
Inline Feedbacks
View all comments
This website is using Google Analytics. Please click here if you want to opt-out. Click here to opt-out.
0
0
Would love your thoughts, please comment.x
()
x
| Reply
We use cookies to ensure that we give you the best experience on our website. If you continue to use this site we will assume that you are happy with it.OkNoRead more