On the third day of competition two more Slalom rounds got completed. Antoine Albeau kept his lead by winning one race today and Valerie Ghibaudo extended her lead by dominating both races. 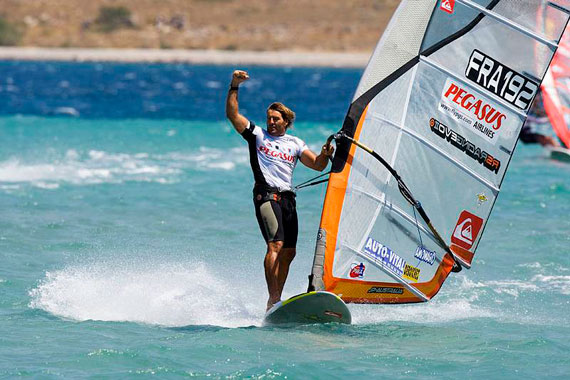 The wind was lighter in the morning – around 10 to 20 knots – and the start got postponed a bit. Around 11.30 elimination Nr. 5 got started. The current speed worldchampion Finian Maynard took the lead, but lost it to a flying Antoine Albeau just at the last mark. In third followed Cyril Moussilmani and on fourth place Björn Dunkerbeck.

In the starts of the finals we saw over earlies of Josh Angulo and directly afterwards of the worldchampion Antoine Albeau. This opened the door for his contenders. Micah Buzianis won this final, which only saw 6 sailors left. Björn Dunkerbeck took the second position and is still in the neck of Antoine in the overall ranking.

In the ladies elimination number 5 and 6 Valerie Ghibaudo dominated again and won both races easily.

Tomorrow we will see the first start at 11.00. The next round will be an important one, it brings the second discard.