Day 2 at the 2019 Mercedes-Benz Sylt PWA World Cup in Westerland, Sylt was day full of action. The conditions were excellent. The men started their third and final freestyle event of the season and they completed the first round of the single elimination. The PWA continued with the women wave single elimination and the men qualifying heats in waves. Sarah-Quita Offringa won the final against PWA wave tour leader Justyna Sniady. Takuma Sugi, Ross Williams, Arthur Arutkin and Antoine Albert made it through the trials and got a place in the main fleet. Unfortunately neither of them made it through round 1 of the single elimination. All title contenders in the men’s wave elimination made it into round two.

29 competitors are battling for the victory this year. Gollito Estredo, Adrien Bosson and Amado Vrieswijk are the top seeds and had no opponents in the first round of the 32 men elimination ladder. Youp Schmit from Bonaire and 2019 EFPT tour winner Yentel Caers from Belgium are currently joint first after the first two events in Bonaire and Fuerteventura. They both have the biggest chance for the title. Youp Schmit had to undergo a knee surgery on his left knee right after the event in Fuerteventura this year, which is not the best prerequisite for the freestyle event of the year in Sylt, Germany. In our interview Youp Schmit told us, that he has recovered well and feels fit for the competition 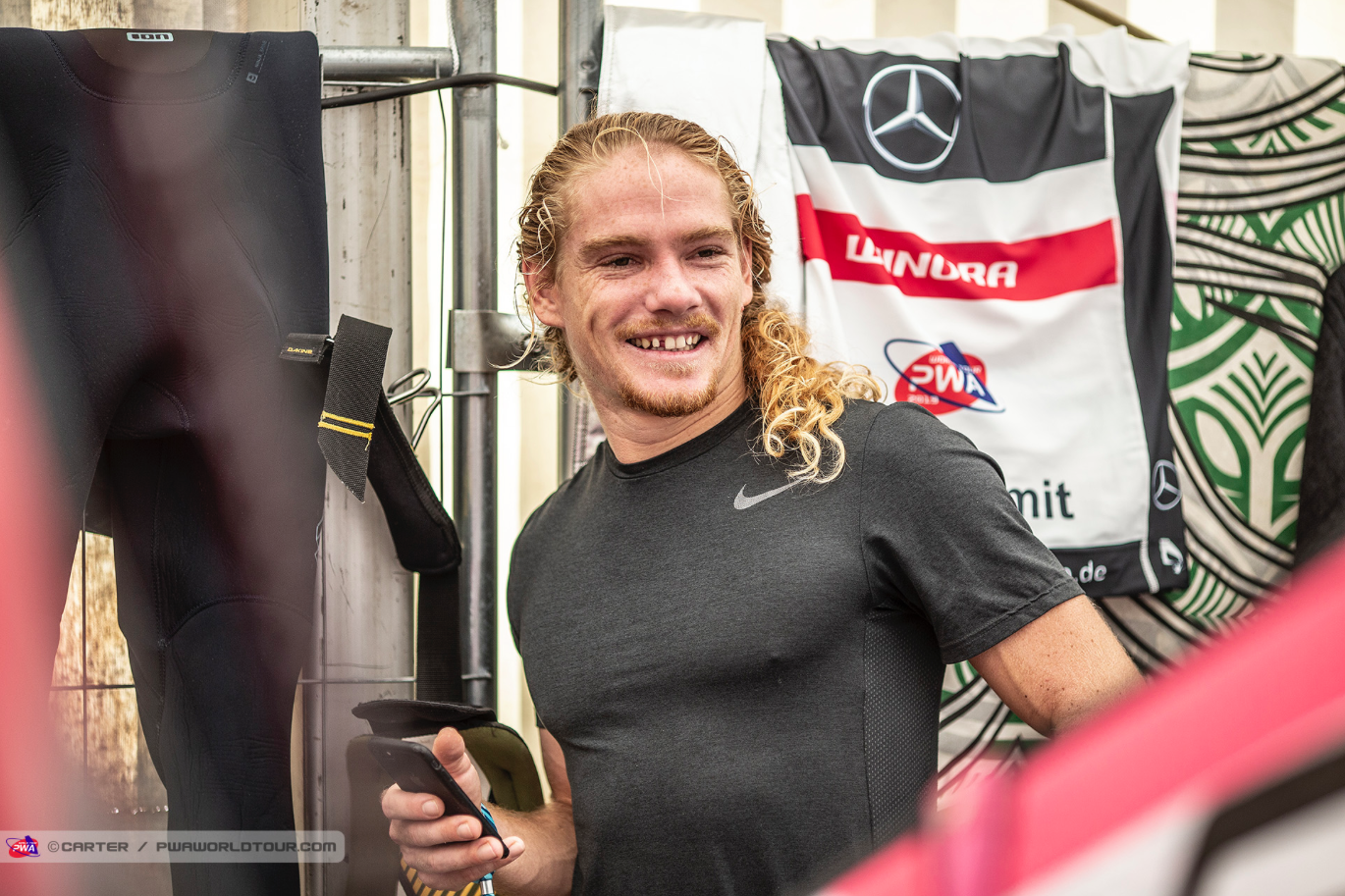 Youp Schmit just recovered from a knee surgery and will battle for the 2019 PWA freestyle title in Sylt. Biggest rival is Yentel cars from Belgium (Photo: Carter/PWAworldtour)

Steven van Broeckhoven, Amado Vrieswijk and Antony Ruenes have still the chance to win the title. The wind forecast is looking promising and we can expect a full double elimination in the freestyle discipline and an exciting battle for the podium places.

Today on day 2, the first round of single elimination got completed with the best 3 moves counting out of 7 attempts on each tack. All the title favorites advanced into round two. Antoine Albert had at the highest heat score in a very close heat against Nico Akgazciyan (123.3 vs 122.2 points), who had the second highest heat score. Dieter van der Eyken impressed with 119.7 points and title contender Yentel Caers scored also big with 116.2 points. Youp Schmit had a solid score of 101.3 points. 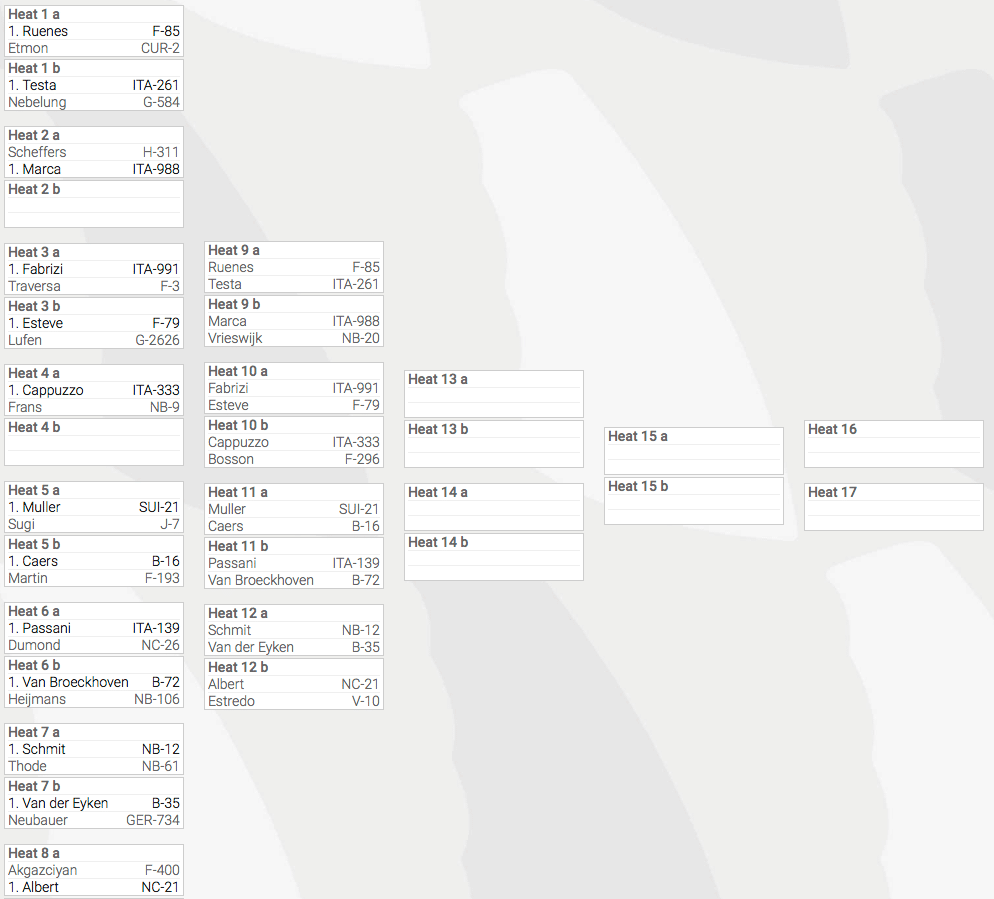 The PWA switched from freestyle to wave at 12:46. Only 11 women compete in Sylt, although 28 women are in the overall ranking. It’s great that 3 young girls are registered for the competition: Maria Morales Navarro, Alexia Kiefer Quintana & Mar De Arce. Unfortunately neither of the young ladies advanced into round two of the single elimination.

World Tour leader Justyna Sniady defeated Marine Hunter and Maiike Huvermann won against current number 2 Iballa Ruano Moreno, what was a big surprise. Euro wave champion Lina Erpenstein won against Steffi Wahl, who returned from a foot injury. Sarah-Quite Offringa was at her brilliant best today and she dominated proceedings – setting 3 out of the 4 highest wave scores – including a superb 9 point wave – as well as also recording 4 out of the top 5 highest jump scores. Justyna Sniady and Sarah-Quita Offringa met in the winners final. The conditions were difficult as the wind picked up but Sarah-Quita Offringa showed again two good wave rides and a big Stalled Forward Loop. In this heat the current tour leader Justyna Sniady did not stand much of a chance. Lina won her heat for third place against Maaike. 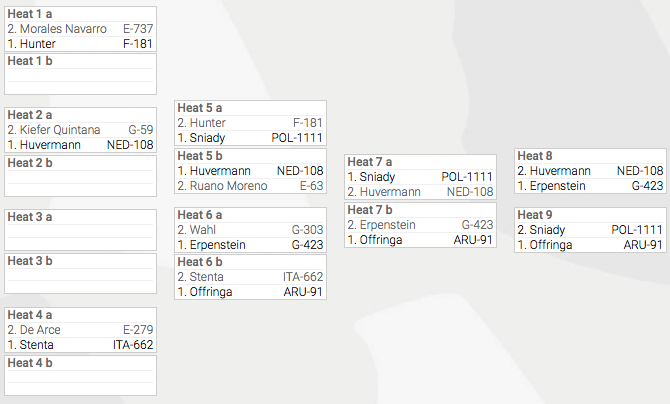 Next up were the men trials, as in Sylt it is only a 32 men fleet, whereas on the Canaries it is a 48 men fleet. 12 men were battling for 4 remaining places in the main fleet.  In the end Takuma Sugi, Ross Williams, Arthur Arutkin and Antoine Albert made it into the main fleet.

The wave single elimination of the men started at around 4pm and the first round got completed. All title contenders Ricardo Campello, Jaeger Stone, Philip Köster, Victor Fernandez and Marcilio Browne advanced into round 2 of the single elimination. We saw a few surprising results, too: Robby Swift lost to Dieter van der Eyken and German Leon Jamaer lost against upcoming hotshot Marino Gil Gherardi from Gran Canaria. Antony Ruenes, who finished 6th last year, lost against 9 times freestyle world champion Gollito Estredo. Most of the heats are close calls already in round one.

Alex Mussolini had the highest heat score of round one with 22.85 points. Jaeger Stone got the second highest score with 21.57 points followed by Marc Pare in third with 20.82 points and Philip Köster in fourth with 20.72 points. 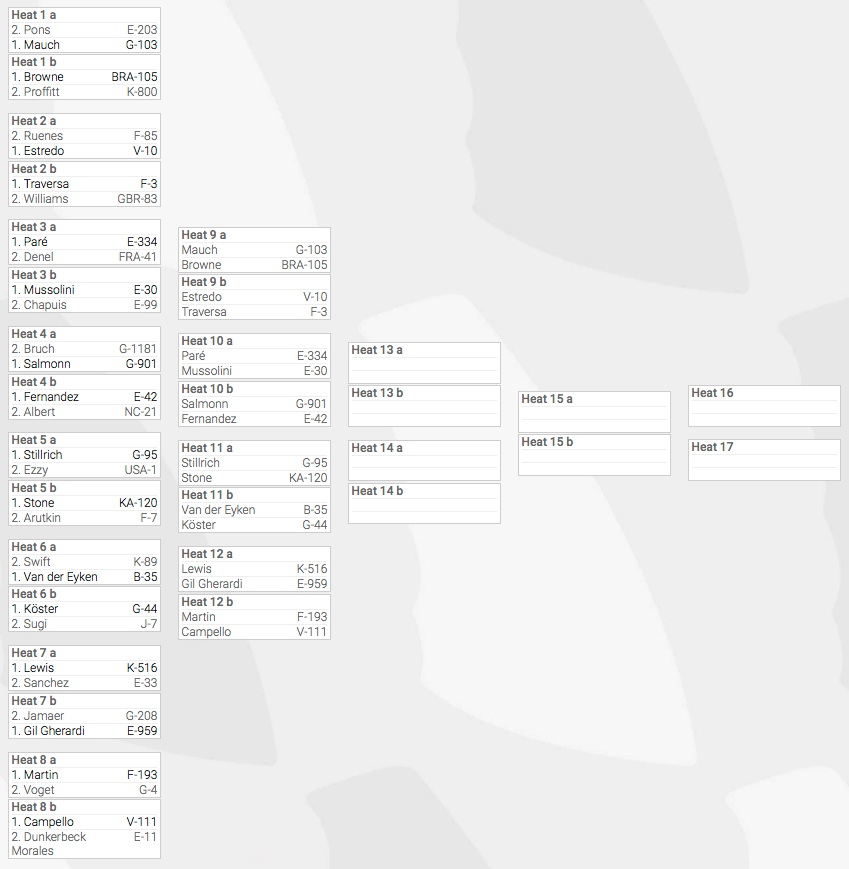 Men wave single elimination after round one (Source: PWAworldtour)

This was only the first day of the event. 8 days are left and the wind forecast looks promising for more action.

Almost all the of the first competition day gone without live stream -ridculuos and this is Sylt, not the North Pole !!…… There was once upon a time a country called Germany