Day 10: The final day of the 2018 PWA event in Syltended without any further competition being completed.

The results from Sylt

WAVE
Thomas Traversa wins the 2018 wave event in Sylt in front of Ricardo Campello and Victor Fernandez.
Victor Fernandez wins his third wave world title in front of Ricardo Campello and Philip Köster.
Sarah-Quita Offringa earns her 2nd PWA wave event victory in Sylt after the Aloha Classic in 2016 in front of Iballa Moreno and Lina Erpenstein.
Iballa Moreno wins her 9th PWA wave title in front of Sarah-Quita Offringa and Daida Moreno.
FREESTYLE
Gollito Estredo wins his 9th PWA Freestyle title in front of Adrien Bosson and Amado Vrieswijk. The podium for the event in Sylt is exactly the same.
SLALOM
Pierre Mortefon wins the Sylt slalom competition in front of Matteo Iachino and Antoine Questel.
Antoine Albeau walks away from 2018 with an incredible 25th world title. He wins the slalom tour in front of Matteo Iachino and Pierre Mortefon.
FOIL
Matteo Iachino claimed the event victory in the foil discipline in front of Nicolas Goyard and Alexandre Cousin.
Gonzalo Costa Hoevel becomes the first man to win the PWA Foil World Championship in front of Sebatian Kördel and Antoine Albeau.

The wind wasn’t strong enough to run any competitions at Westerland, Sylt. Tomorrow will be the final day.

Matteo Iachino dominated the foil racing on day 8. He won 2 eliminations and made one 5th place, what’s his discard. Nicolas Goyard won one elimination, too. The Italian now leads with lowest possible points after 4 eliminations counting.

Results after 5 eliminations (one discard):

The freestyle final was an exciting one. Amado Vrieswijk had a great comeback and fought back in the top 3 defeating Steven van Broeckhoven in a very tight , but world class heat by 2 points. In the next heat Amado had to face Gollito. He struggled with the timing and finished his heat 30 seconds to early. Gollito took the win and faced event leader Adrien Bosson. Gollito won the first final and they had to go for a Super final. There was still the chance alive for Adrien to win the event and the title, but Gollito had an incredible heat with a monster Shifty (more than 22 points score). Adrien gave everything, landed a big Kabikuchi, but missed 6.7 points to win. Gollito had a score of 130 points and deserved to win today. Congrats to all finalists and to the old and new Freestyle World Champion Gollito Estredo from Venezuela.

The finals in the men wave double eliminations were a tough battle in very difficult conditions. Antony Ruenes again caused a big upset defeating title contender Philip Köster. Victor Fernandez won heat by heat, defeated one of his main opponents, the Australian Jaeger Stone, and needed to beat Thomas Traversa to get in second place and take the third Wave World title back home to Almerimar again. Thomas Traversa defeated Victor Fernandez in a very close heat and won the first final in the double. There was some confusion on the beach as Victor immediately got celebrated as the winner and 2018 PWA Wave world champion, but not all scores were calculated through the live judging system. In the end Thomas won by 0.07 points against Victor and he had to wait how the results between Thomas and Ricardo will look like. Next heat up was the final in between Thomas and Ricardo. Thomas was very confident with the conditions and defeated Ricardo quite clear.  It was all about the super final now. The final heat of the elimination decided about the wave title. Ricardo could have won teh title with a victory against Thomas. Thomas sailed great again, had a lot of points on the score sheets after a few minutes and defeated Ricardo, who had  a much better heat, but lost and gave the world title out of his hands. Congratulations to Thomas Traversa winning his third PWA event in his career and the first on ein Sylt. Congrats to Victor winning his third PWA World title in waves. Ricardo went away with a second place in the event and a second place in the overall ranking. 2018 had no discard as the men only had 3 wave events in total.

The ladies, who were sent out in the morning around 8.00 am, but struggled in the difficult conditions and had to stop the attempt. They started their double elimination again and completed 3 more heats. Dutch Maaike Huvermann climbed up the rankings into the top 5 already.

What happened on the first four days?
On the first day the wave elimination of the men and women got started and on the second day 2 slalom races and 2 foil races were completed. On day 3 there were no competitions. On day 4 we saw the first three rounds of the men freestyle single elimination.

Then the race director decided to switch to the wave discipline. The single elimination of the men and women is almost finished. In the men only the two finals are missing and in women’s competition the semi finals will be the next heat. 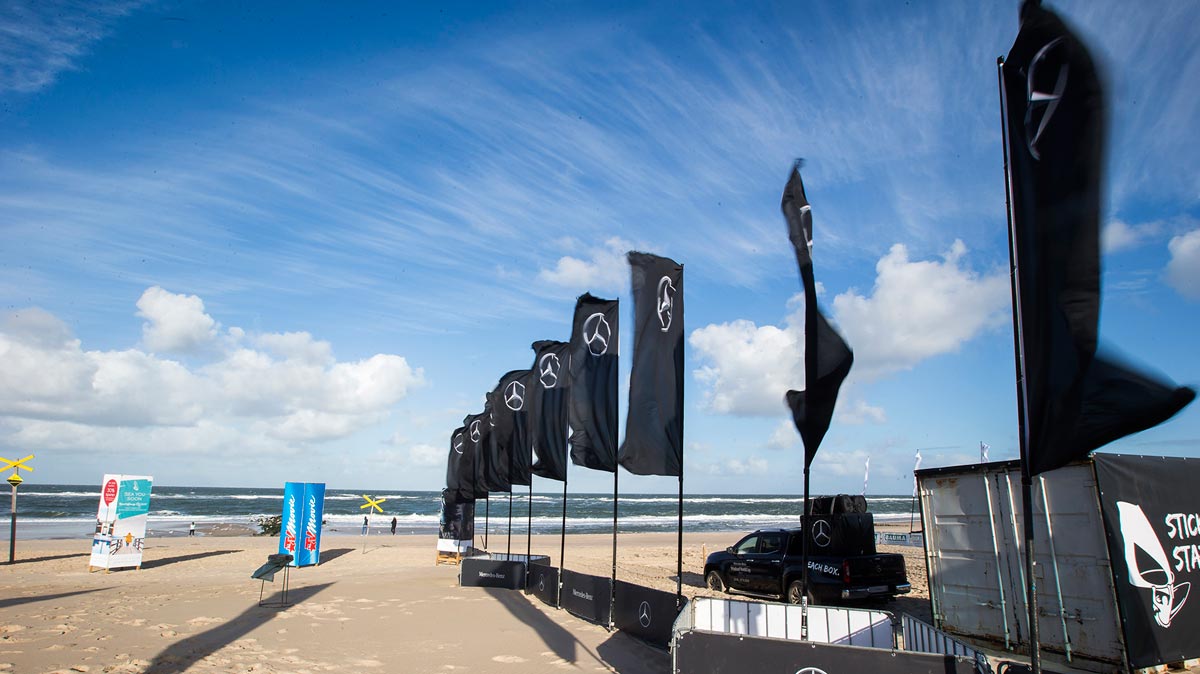 Check out the action from the first days of the PWA Windsurf World Cup Sylt.