On the opening day of the 2016 Mercedes-Benz Sylt PWA Grand Slam Iballa Moreno and Alex Mussolini won the single eliminations. After two days of light wind and no competition, we saw an excellent freestyle show on day 4. Mr. Double Air Culo Amado Vrieswijk won the winners final with the high score of the day (167.5) against Gollito Estredo. On day 5 and 6 it was the turn of the Slalom sailors. 3 Slalom eliminations got completed and we saw Italian Matteo Iachino dominating all 3 eliminations. Day 7 was a freestyle day and 13 heats of the remaining double elimination got completed. 4-5 heats are still missing.

On day 8 the fourth slalom Elimination got started but could not be finished as the wind dropped too much. On day 9 the Elimination got finished and brought the first discard for the slalom sailors. Gonzalo Costa Hoevel managed to  win elimination 4 ahead of Matteo Iachino and Finian Maynard. Overall Matteo Iachino is still in the lead followed by Gonzalo Costa Hoevel and Julien Quentel.

9.10.2016 | Day 10
At 10am the first freestyle heat of the day got started: Yentel Caers vs Adrien Bosson. Bosson won and as well the next heat against Dieter van der Eyken, but lost against Gollito. Gollito was on form and won the final against Amado Vrieswijk and forced an all decdiding super final. The first super final got cancelled due to dropping wind. They extended the heat duration and started a 2nd attempt. Gollito Estredo sailed an incredible heat and won with 158.20 points over Amado Vrieswijk, who scored 148.60 points for his heat. Gollito won the PWA freestyle World title for the 7th time. Congrats to the winners!!

The points in the super final heat (Source: PWAworldtour 2016)

Day 8 saw some Slalom action. Elimination 4 almost got completed. The last top 16 riders are waiting for their heats. Again a few big names missed out to qualify for the top spots. Again some of the younger riders surprised with brilliant results.

The double elimination in the freestyle discipline saw a re-start at 9.30 and two valid heats in relatively light wind conditions (8 minute heats (later changed to 9 minutes) – best 3 moves from 6 to count – 3 minute transition). The wind is gusty, but there are nice ramps all over the heat area. 4 or 5 heats are missing till the end of the double elimination. Heat 48 between Bosson and Caers got cancelled due to unsuitable wind conditions. The wind unfortunately dropped a lot and never returned with suitable force… Unfortunately still 4 or 5 heats have to be completed in the double elimination. Let’s hope that we will see suitable freestyle conditions on the remaining 3 event days. There is hope to get enough wind on Friday or Saturday.

Slalom starts at 11:00. Two Slalom eliminations got completed. Italian Matteo Iachino was dominating all eliminations and is in the lead. He has the lowest possible score points at the moment. Julien Quentel is in second and Ross Williams in third. And there are currently ranked a few new faces in the top 10: Bruno Martini, Marco Lang, Vincent Langer and Ingmar Daldorf. The younger generation is pushing hard! Antoine Albeau is ranked 19th, but we are sure to see more elimination which will bring discards.

On day 5 of the event it was the turn of the Slalom sailors. Matteo Iachino managed to win the first Slalom elimination, Antoine Questel finished in second and Julien Quentel in 3rd.

The Foil racing saw 4 races in gusty light wind conditions. Sebastian Kornum, Antoine Albeau, Gonzalo Costa Hoevel, Mateus Isaac and Maciek Rutkowski are the top foil riders at the moment. Antoine Albeau, who  as training this new discipline over the last winter, won two of the four races. Sebastian Kornum and Gonzalo Costa Hoevel won respectively one race. It looks like Foil racing is a good option for light and gusty wind conditions. The PWA plans to organize competitions at selected venues in 2017 and for 2018 an own tour is in the planing.

Perfect freestyle conditions for 4,8m with almost side shore conditions (starboard tack) and ramps.  The single elimination started at 9.20 and at around 15:00 Mister Double Air Culo Amado Vrieswijk won the winners final with the high score of the day (167.5) against Gollito Estredo. Dieter van der Eyken in third and Adrien Bosson in fourth. With the actual results Amado still leads the overall rankings. Gollito sits in second,  Yentel Caers in third and Dieter van der Eyken would move up to fourth place. Read more about day 4: Amado Vrieswijk wins the Single Elimination 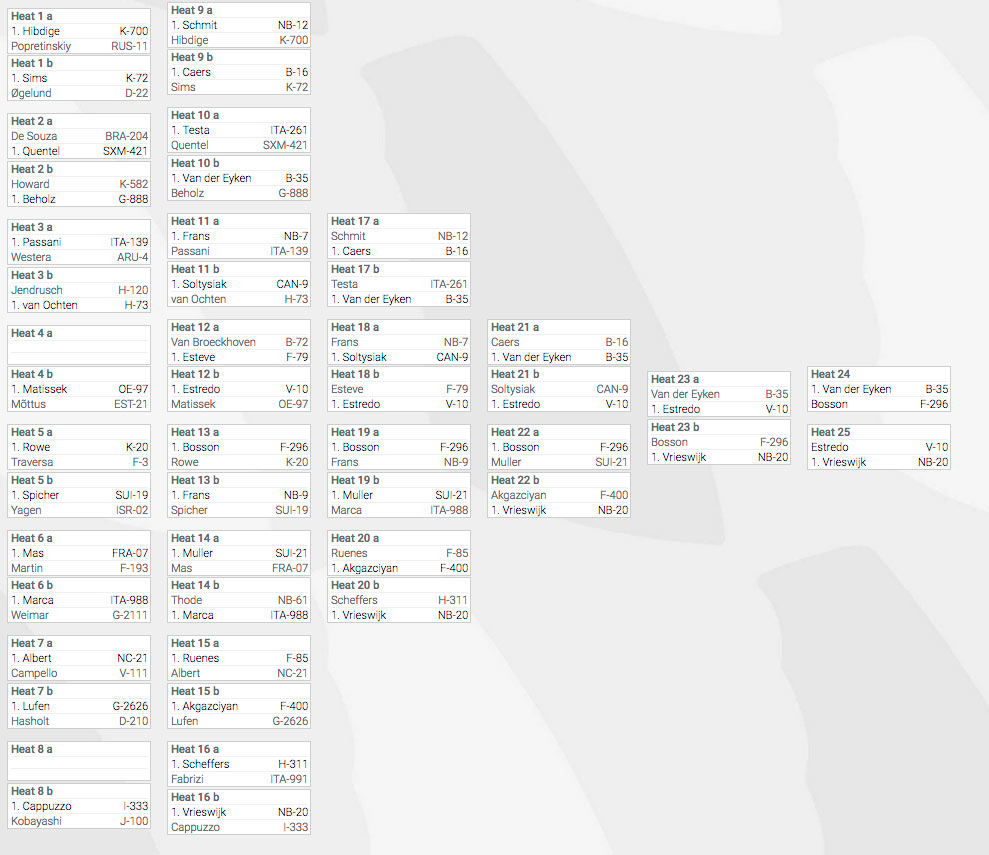 Very light wind during the whole day and just surfing and SUP action at the Brandenburger beach. Not even enough wind to run any foil races. Robby Naish gave an interview and spoke about the typical onshore Sylt conditions, the great surf after the storm, about the unbelievable development in the freestyle discipline, his actual status quo after his heavy injury 5 months ago, his thoughts on foil windsurfing and why nothing can beat a wave windsurfing day at Ho’okipa. You can watch the interview in the live stream of day 3 (from 20:10 – 32:20).

Day 4 will see some north easterly wind and there will be a realistic chance to start the freestyle single elimination. Skippers meeting is scheduled for 8.00 am.

No wind, rain and good surf in the morning. In the afternoon the PWA started the first ever Foil Slalom Windsurfing exhibition/test race and Alexandre Cousin won the race ahead of his French colleague William Huppert and Polish racer Maciek Rutkowski. The wind was around 5 – 6 knots on the race course and there was still some swell and a nasty beach break.

At around 11 o’clock the qualifying started and the following wave riders made it into the main wave event: Maciek Rutkowski, Gustav Haggstrom, Julien Quentel and Martin ten Hoeve won the repechage heat and made it into the main event, too. Iballa Moreno won the women’s division against her sister Daida and Alex Mussolini won the winners final against Thomas Traversa.

Heat 1: ten Hoeve vs Rutkowski vs Kolberg vs Bosson

Heat 2: Haggstrom vs Rydberg vs Hermann vs Bunger