The opening day of the 2016 Mercedes-Benz Sylt PWA Grand Slam saw the wave fleet take centre stage as the wind and waves arrived as predicted, which allowed a wave result for first time since 2012. The conditions proved tricky at times and the infamous Sylt shorebreak claimed several victims along the way. After a whole day of competition Alex Mussolini and Iballa Moreno won the single eliminations and the event. Alex Mussolini won his first and only PWA wave event in Sylt 2009 and now after 7 years and several top 3 places he is again on top after the single elimination. 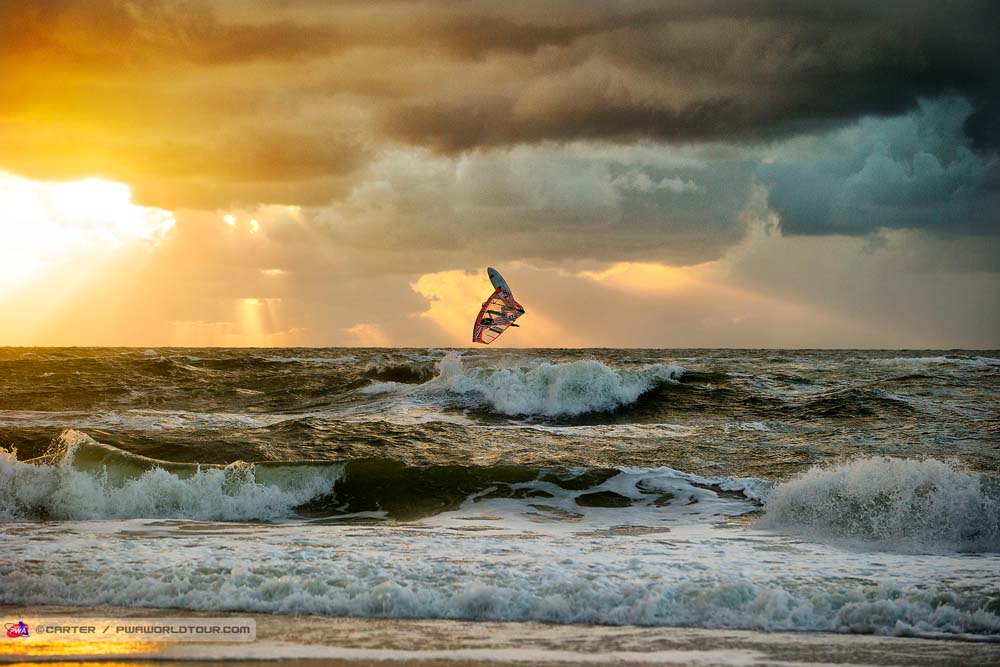 Ricardo Campello was going out in the first round against Kenneth Danielsen. Both had the same score of 14.62 points, but Danielsen advanced due to the higher single wave score of 5.88, compared to a 5.38 score of Campello.

2015 PWA Freestyle champ Dieter van der Eyken confirmed again his form in the wave discipline and won against Adam Lewis in the first round but was then missing 1.63 points to beat an on form Kenneth Danielsen.

Victor Fernandez got the highest heat score with 23.13 points in his quarter final heat against Dany Bruch. Dany Bruch got 22.87 points for his heat which was the 2nd best heat score of the day.

None of the qualified riders from the trials – Gustav Haggström, Julien Quentel, Maciek Rutkowski or Martin ten Hoeve – made it through the first round.

Klaas Voget took down the 2013 PWA champion Marcilio Browne. Klaas made it on the podium at Sylt once!

Daida Moreno got the highest heat score in the women’s fleet with 21.38 points in the quarter final heat against Justyna Sniady and probably got sucked in the hardest by Sylt’s massive shore break.