On the 4th day of the Cold Hawaii PWA Wave World cup, the second wave tourstop of the 2010 season, the top 16 riders battled it out in the double elimination. The wind blew cross onshore and was in between 15 and 25 knots, but changed alot in strength, but was consistent enough to complete the doubele elimination. This fact made it extremely difficult for the world best riders to choose the right gear. Both finalists had to change gear once while the 14 minutes long  final. We saw a great sailing Victor Fernandez, who went through 9 heats. The Spaniard could win 8 heats, but lost in the final against Kauli Seadi, who kept the  nerves and scored high with extremely nice waveriding in difficult cross onshore conditions. 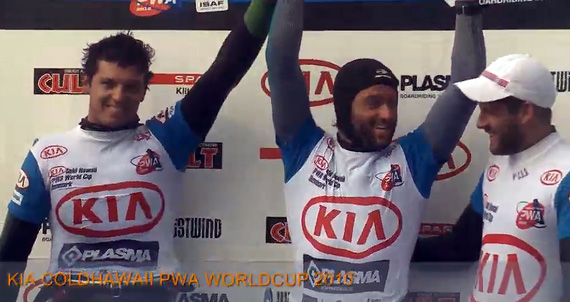 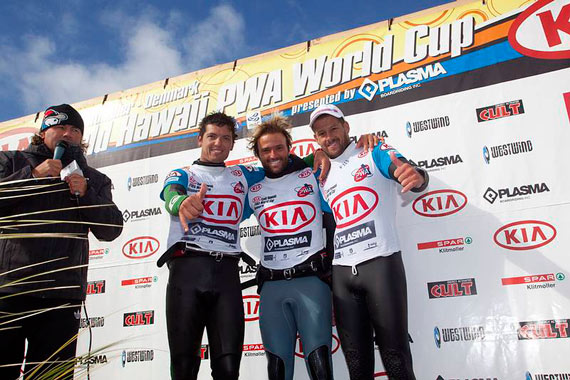 The top 3 after the double elimination (Pic: John Carter/ PWAworldtour 2010).

Victor Fernadez sailed impressive today and landed a clean double forward in almost all of his heats. The Spaniard, who is the current PWA Wave Worldcup leader in the wave discipline, fought down his teammate Peter Volwater, a strong sailing John Skye, his best friend on tour Klaas Voget, the best double forward looper 16 year old Philip Köster, US boy Kevin Pritchard, port tack expert Dany Bruchwindsurfing stuntman Ricardo Campello and Kauli Seadi in the first final. So a second final heat, the so called super final, had to be started. All heat s for the podium had a duration of 14 minutes. The heats before had 12 minutes duration. The best two wave rides and the best jump were counted by the judges.

Kauli kept the nerves and focused on the waveriding in the second final. Victor went for two double forwards, but could not land very clean both times. Victor also landed a Pushloop, had a nice tweaked backside air, but missed some energy after sailing 8 heats before. Kauli had some amazing cutbacks above the massive white water, landed a tweaked pushloop (the only jump he made) almost in the end of the heat. “I am super happy. My strategy was to focus on the waves and riding until the beach. It worked out, I guess it was a good plan!”, says a very happy Kauli Seadi.

Congratulations to both of them!

Check out the gallery of the best action pics of the day, taken by John Carter:

YESSS Kauli is the king!!!

The super final…. For me the winner is kauly !!! Great wave riding.
Respect for victor…. Realy good!!!!!

i saw all both 2 finals and for me the winner is victor!!! congratulations to all for the show and the organizers….well done!!