Day 3 of the Cold Hawaii PWA Wave Worldcup event saw excellent waveriding conditions with logo- to masthigh waves and wind up to 40 knots. Three rounds were sailed in the double elimination until the wind turned into offshore completely. The PWA crew and the remaining 16 riders, who were still in the double, were on stand-by until 18:55 in the evening. Despite the difficult weatherconditions we saw extremely nice waveriding and great performances of many riders. German Klaas Voget, who knows the location for 15 years already, impressed most with an outstanding show!

The conditions looked promising from the early morning on and the first heat of the double elimination got started at 9:30. And 15 heats plus two attempts followed.

In the first round of the double elimination we saw one big upset. Marcilio “Brownzinho” Browne lost to the French upcoming Wave and Slalomsailor Jules Denel. What else happened  in round one: 41 year old local Lars Petersen sent Antxon Oetagui back to the beach, although the Spaniard from Lanzarote landed a double forward. Lars took advantage of the spot and had great waverides! Also in great form was local Kenneth Danielsen, who could advance in round one, two and three and now is already in the top 16 as the best placed local! He proofed his high skills in the waveriding and jumping and kicked Wout Burman, Phil Horrocks and Thomas Traversa! Now he has to sail extremely well to beat Klaas Voget, who had the highest score in the one heat he sailed today against Ben Proffit. Massive waveriding including the aerial of the event and cleanest jumps like a very high onehanded Backloop impressed the judges most. He also got placed as the sailor of the day by the PWA on their website! 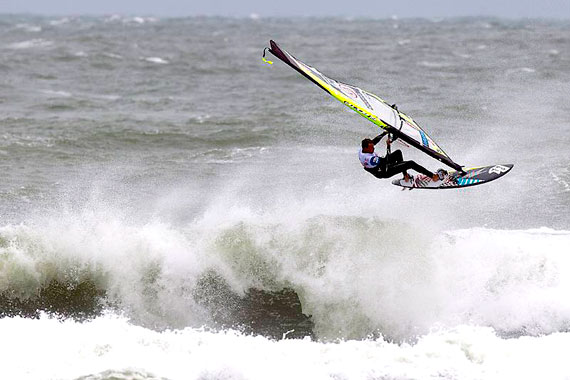 Boujmaa Guillol from Essaouira, Morocco gets better and better on port tack conditions and could advance in all his heats he sailed and eliminated Kevin Mevissen, Florian Jung and Camille Juban. Now he is facing Jamie Hancock in heat 42, which got started twice and cancelled twice as well.

Guillol and Hancock had to sail in wild weather conditions against Juban and Estredo. The wind picked up around 13.30 to 30 knots+ and it started to hail. Both kept a cool head and made it through into the top 16. It´s a great comeback for Boujmaa Guillol and Jamie Hancock seems to keep his great form he already had  at the Reunion Wave Classic 15 days ago. 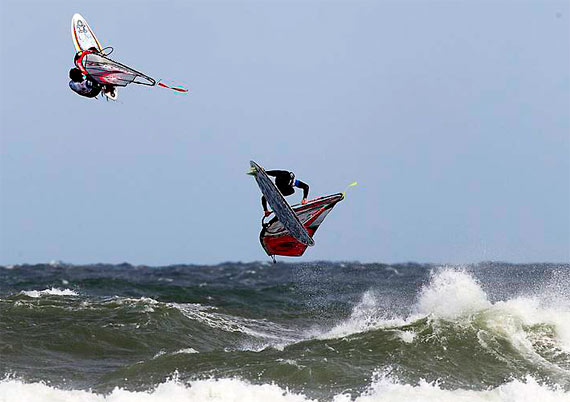 Victor Fernandez, who lost to Camille Juban in the single elimination, had a good comeback in the double elimination and could beat the locals Bech and Bjørna. Later on he had to sail very well to defeat the current SUP worldtour leader Kai Lenny from Hawaii. The 17 years old waterman ripped the waves extremely nice and landed a massive Backloop. He definitely challenged the tourleader Fernandez, who took a massive wave at the end of his heat and found the better end in this fight. 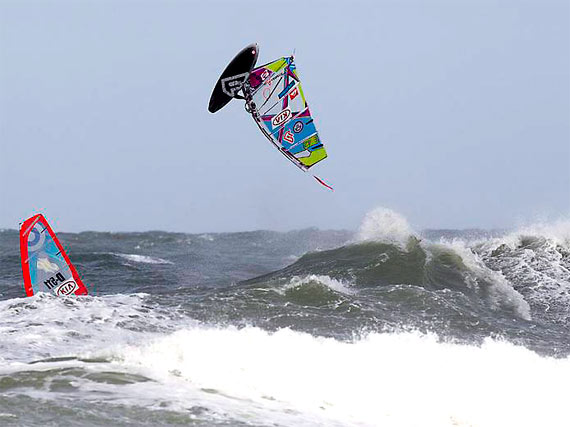 10 or 11 heats are missing to crown the final winner of the first PWA event at Klitmøller. 16 riders have the chance too win the title. And there are many big names pushing hard to advance and challenge the top 4 guys: Fernandez, Voget, Swift, Volwater, Skye, Mussolini, Köster and there are some newcomers like Hancock, Danielsen, Guillol or underdogs like Williams or Ceballos, who impressed with a very solid performance today. 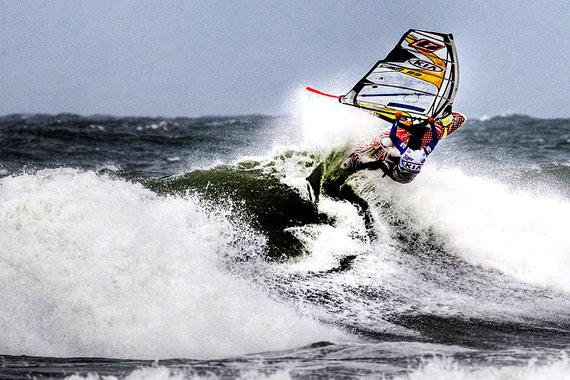 Ross Williams was in favour of the nice conditions (Pic: John Carter/ PWAworldtour 2010).

The skipper’s meeting will be at 09:00 tomorrow, with a first possible start of 09:30. And let´s hope that the wind blow sideshore or a bit side off. The forecast says that the wind should turn into onshore, which would make it even harder for the riders. So everybody is excited how the conditions will look like tomorrow morning. Perhaps we will know the final winner tomorrow already!

Seadi, Campello, Bruch and Pritchard are the top 4, just behind Köster, Mussolini, Skye and Swift. And further 8 sailors, who will fight hard to make it in the next round: Williams, Ceballos, Hancok, Guillol, Fernandez, Volwater, Danielsen and Voget.

chris2010-09-16T23:45:56+02:00September 16th, 2010|
Subscribe
0 Comments
Inline Feedbacks
View all comments
This website is using Google Analytics. Please click here if you want to opt-out. Click here to opt-out.
0
0
Would love your thoughts, please comment.x
()
x
| Reply
We use cookies to ensure that we give you the best experience on our website. If you continue to use this site we will assume that you are happy with it.OkNoRead more