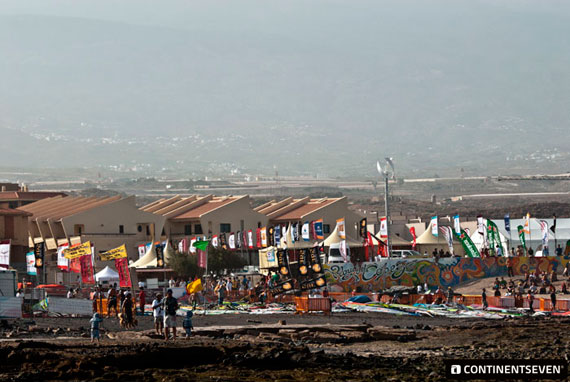 Statement of Dani Bruch, organizer of this event and of course competitor, about the first day

The beautiful town of El Medano in Southern Tenerife hosts the second PWA wave competition of the season. The wave fleet, 14 ladies and 46 men, started to compete at the rocky  shore of El Cabezo, El Medano their competition today and will be continued  for 5 days till the 20th of July.
It is the hometown of wave king and event organizer Dany Bruch (Starboard / Severne / AL 360), who fulfilled his dream to get the worldcup back on his homespot El Cabezo.

He explained in the interview with PWA Press officer Ed Sinclair, what everybody will expect at his homespot:

“El Cabezo is an amazing spot. The wave is a left hander and it is formed at a point break, usually you can fit in three or four frontside turns. The wind is a little lighter than in Pozo. I sail on 4.2m or 4.7m for the majority of the time.
The jumping is really great in El Medano, the wave comes straight at you so you can go really high. We can expect to see super-fast double forwards and massive backloops, but I think the wave riding will be the most impressive thing as a lot of the sailors prefer that… just watch out for the rocks!” 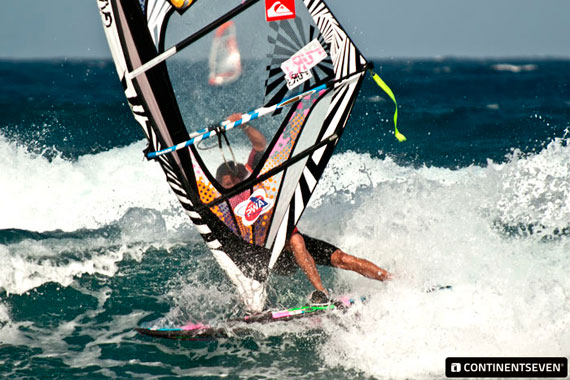 The PWA set the first skippersmeeting for 13.00 and the first men heat was on around 13.30. We saw higher tide at the beginning with 15 to 20 knots of wind and 2 meter high waves. Perfect conditions. Perhaps the wind was bit on the lighter side. Most of the sailors were using sailsizes in between 4,5 and 5,3 m and 75 to 85 liter boards with twin, quad, trifin or single fin. It was definitely not the most easy decision to choose the right setup. Kauli told us, that he is not sure to use the onshore or sideshore setup.

And at several moments it was definitely a very hard decision for the judges to decide, if the conditions were suitable or not!

In the end he definitely took the right decisions and made it into the top 8, beating Tuomo Naalisvaara and Ben Proffit with super aggressive waveriding. He also landed a fully planned clew first Backloop!!

As well into the top 8 made it Pozo winner Philip Köster, who not only impressed with fully planning double Forwards and other crazy jumps, but also scored big points on the waveriding. And that was neccessary, because the judges gave points for two waverides and one jump. In his last heat he stopped an aggressive sailing Boujmaa Guilloul, who seems to recover very quickly from his monster crash trying a triple on Maui. 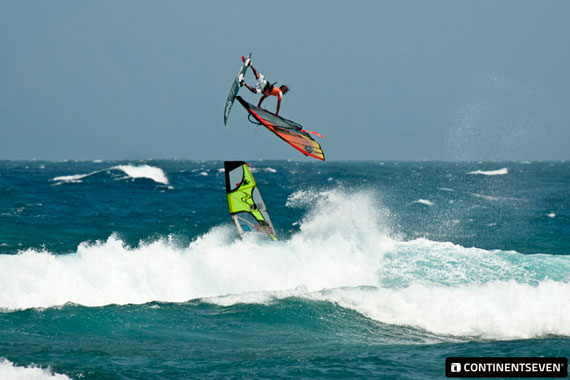 Young Australian Jaeger Stone was on fire, defeating Scotty McKercher, who had his comeback on the PWA tour after a successful recovery from a hip operation. But Scotty will see a comeback through the double, we bet!! 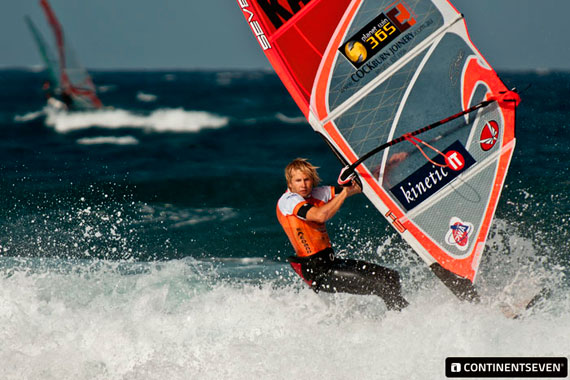 Jaeger stopped an excellent sailing Alex Mussolini in the second round, which was a bit of a surprising result. Afterwards he could win against Jules Denel, who definitely found a great rhytm in the competition. Tomorrow Jaeger will fight against Victor Fernandez for the qualification in the top 4.

Victor, who sometimes looked a bit underpowered on day 1, mixed great jumps with solid waveridng. He took out Pozo local Romero and French Thomas Traversa in a great heat. 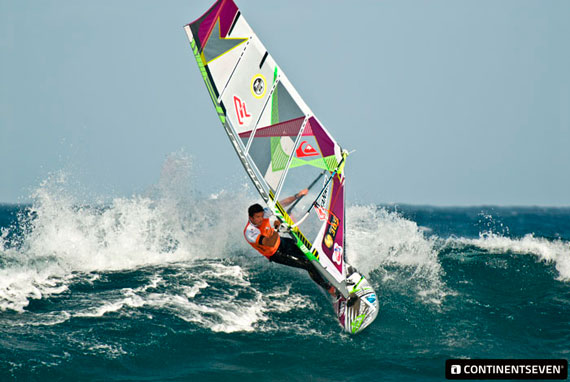 Dany Bruch, the event organiser, had a solid day as well. He could win his heats against Alessio Stillrich and local Valter Scotto. So he sits in the top 8 already. We could see the local knowledge, which helped Dany to find waves and milk them till the end.

Dario Ojeda, who finished 3rd on Gran Canaria, was again very aggressive in the waves ripping next to rocks. It was worth the risk and he could beat a very strong sailing Peter Volwater on day 1 and qualified for the top 8  as well.

As well into the top 8 made it Robby Swift, who dedicated his windsurfing career to the wavesailing discipline. He extra stopped with the Slalom discipline in 2011. But it obviously pays off for him.

THE LADIES
In the women´s fleet 4 heats got sailed. The favourites, the Moreno twins, Karin Jaggi and Nayra Alonso advanced into the next round. As well Ophius, Tsape, Aubet and Treboux made it into the top 8!

The windforecast looks excellent for tomorrow and th waves should be even bigger. First skippersmeeting is scheduled for 08.30. That´s early, but the plan is to finish the single and go straight into the Double.

Yes, nice waves and more sidesjore than pozo, so, some very nice waverides we could see ! Hopefully the wind is stronger today for big jumps !!