Day 1 saw good wavesailing conditions at El Cabezo. Two waverides and 1 jump got counted by the judges. Many riders showed excellent frontside waveriding. Outstanding sailor of the day 1 were Alex Mussolini and Thomas Traversa, who both impressed with great wave selection, a smooth style and perfect Backloop landings.

12 riders fought in the trials for the remaining 6 spots in the main fleet. Flo Jung, Alessio Stillrich, Scotty McKercher, Jonas Ceballos, Martin Ten Hoeve and Moritz Mauch. None of them were able to make it through the second round. It was a close decision in between Ricardo Campello and hotshot Alessio Stillrich, who had an amazing waveride, but Ricardo landed a perfect double Forward and scored big points in the waves, too.He won by 1 point in the end. But Alessio, the 18 year old Pozo local, was able to show his great talent again. He tried a double Forward and landed a perfect Pushloop in the right section of the heat area, near the bunker.

Pozo local Jonas Ceballas, who made it through the trials into the main event, had a good chance to challenge Philip Köster this time, who had a hard time to find the right waves. But the two times world champion landed a perfect double Forward and made it in the last men’s heat of the day into the top 16. He got a 10. The first 10 of the event. Looks like a perfect jump with a high score in between 9 and 10 makes the difference in the end, especially when the waves drop like it happened in that heat. Jonas was a bit unlucky as he landed a great tweaked Pushloop just a few seconds before his heat started. 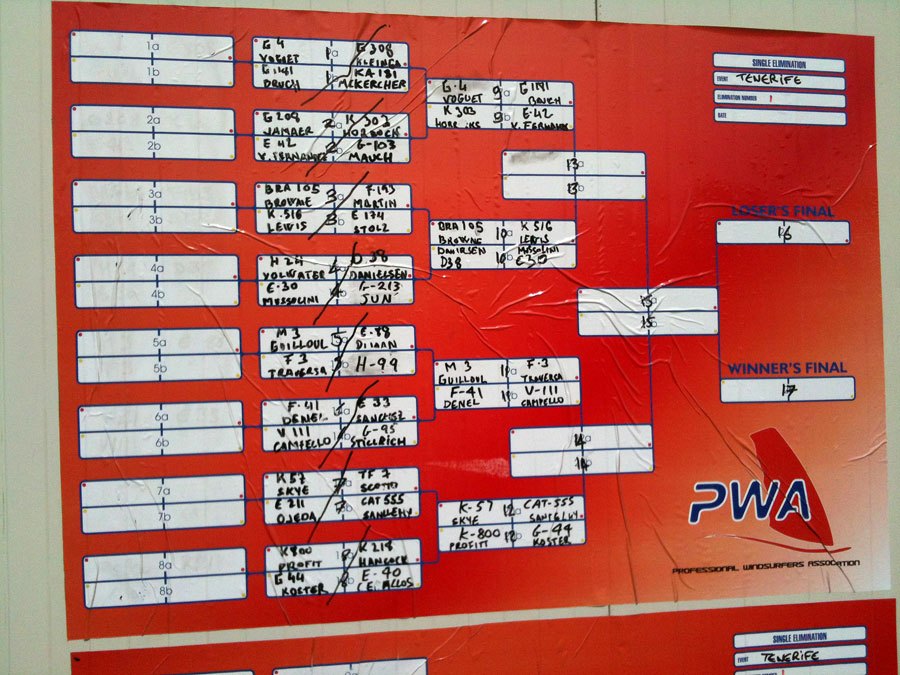 Watch the first highlight video produced by Bartek Jankowski, with a lot of great action !!