Incredible waveriding conditions here at El Medano, Tenerife on day 2. The single elimination got finished first. Daida Ruano Moreno and Philip Köster were announced as the winners at around 13.00. The conditions were impressive, with sometimes masthigh sets rolling into the bay. One jump and two waverides were judged. Philip Köster improved his waveriding enormously over the winter and could not only score high in jumping, but also waveriding. 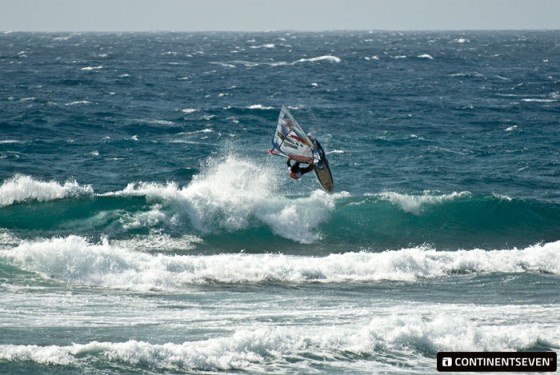 For some a surprise, for us not, was the Australian Jaeger Stone, who sailed his way on to the second place in the single elimination. Jaeger has an unique, natural style and was for us always one of the biggest talents in waveriding. Just in January we did an interview with Jaeger. If you maybe did not see or read it back then, here is the link to the interview: Interview Jaeger Stone 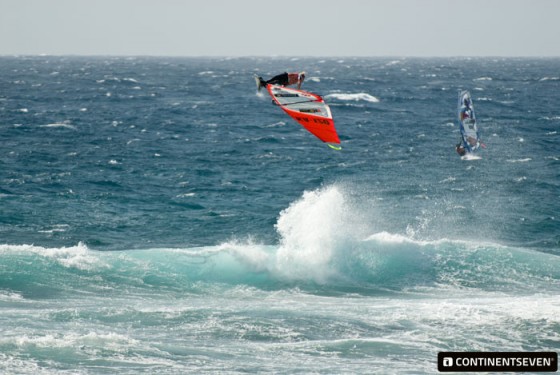 In third Kauli Seadi, who defeated local Dani Bruch in an impressive losersfinal. This was probably Kauli´s best heat on the 2011 PWA season, sliding through cleanest Takas and riding the waves in the steepest sections. 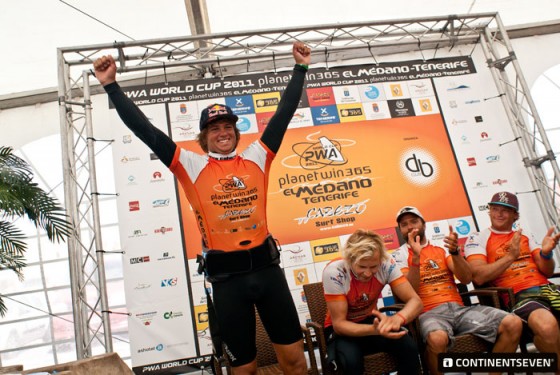 The top 4 men in the single

In the ladies Daida Moreno again took the hammer down against her twinsister Iballa Moreno. I looked like, both were extremely overpowered. The wind got stronger and stronger while the winnersfinal and 4,0 was a too big choice. Daida had the better waverides and the better jump. The third place went to Nayra Alonso, who battled it out with Karin Jaggi. Nayra had longer waverides and could convince the judes. 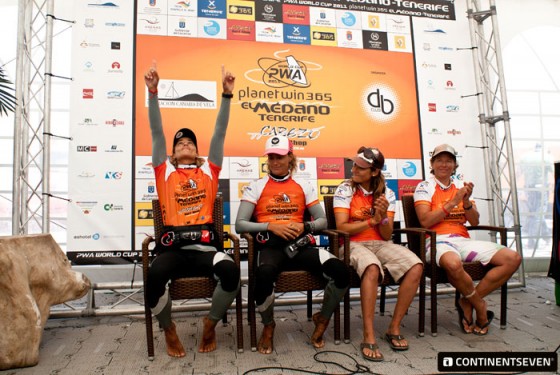 Directly afterwards the double eliminations got started. Just 3 or 4 heats in the women´s fleet and 4 or 5 heats in the men´s fleet are left. Out of our view, the sailors of the today´s double elimination were definitely Boujmaa Guilloul and Alex Mussolini. Boujmaa finished in 7th position, which is a bit a surprise in port tack conditions, also for him: “Unexpected 7th place on the Tenerife PWA World Cup. Super happy with the sailing”, writes a happy Boujmaa on Facebook, who won three heats in the double elimination. Boujmaa then got stopped by our second sailor of the day: Alex Mussolini. The Tenerife local sailed today 7 heats, winning over Camille Juban, Klaas Voget, Ben Proffit, Marcilio Browne, Victor Fernandez and in the penultimate heat of today against Ricardo Campello, where Mussolini could not find any ramps for jumping until the last minute. But then he nailed a huge Back Loop and a ever higher one footed, one handed Backloop in the last minute of the heat.

And we were right with our prediction, that Scotty McKercher would fight back in the Double Elimination. He showed his experience in waveriding competitions, to be always on the right place and finished 13th.

We did a lot of filming yesterday and today. So, stay tuned for some videoaction.

The skippersmeeting for tomorrow is scheduled for 09.30 and the first possible start for 10.00am.