The event in Podersdorf 2010 was the first test for the worldbest freestylers. Most of them showed up in Podersdorf to fight for the title. Egor Propretinsky was unlucky. He could not get on a working plane back from Maui to Moscow. 46 incredible good sailors fought for 30.000 €. 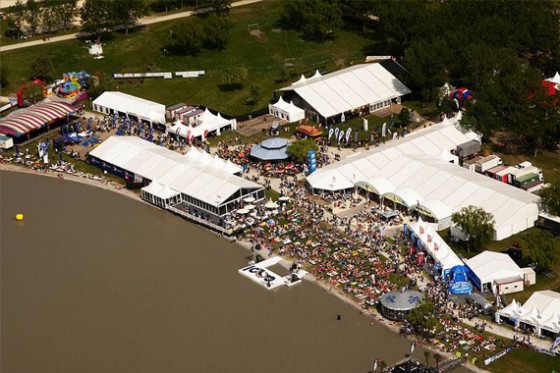 No wind in the beginning, but still action

It was a long week from 29.04. – 5.05.2010 with a super exciting final. In the beginning the wind was too light or not existing to run any heats. The PWA  pushed hard, started heat number 1, set up super early skipers meetings at 5:30 in the morning, only to walk home without achieving anything at the end of the day. On the first weekend – 45.000 visitors showed up in the beachpark of Podersdorf,  by the way this was a new record – an amazing ramp contest and tow-in windsurfing action saved the show on the water. Windsurfing proofed its qualities in absolutely zero wind.

We saw big Airflakas, Forward loops and straight jumps over the ramp, which got created by Tom Hartmann and Dani Bikich. Both are from Vienna. 7 riders got pulled over the big ramp. Taty ruled the show on the ramp by landing an amazing Airflaka and Steven van Broeckhoven won the Tow-In action with a perfect Culo. 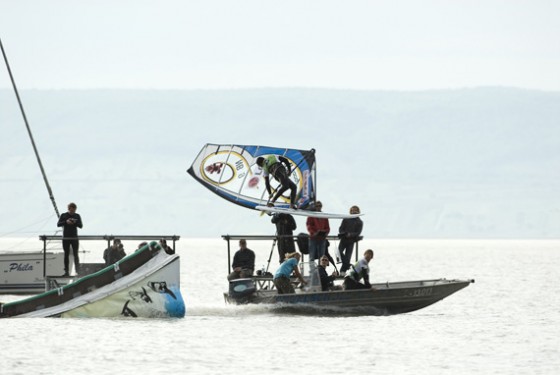 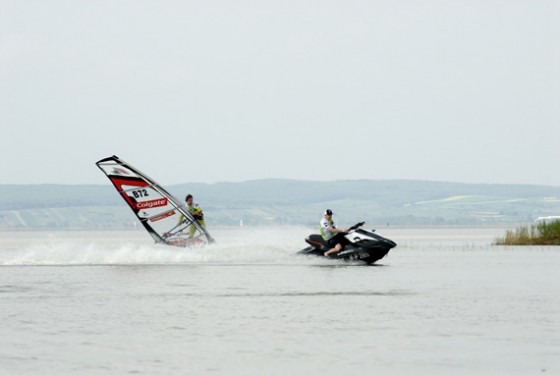 After the super weekend two more days with less wind and rain followed. On the final day the PWA crew set up the skippersmeeting for 5:30 in the morning to leave nothing undone. And it paid off.

The wind was on. A stormfront arrived. The temperatures were cold, but the wind was blowing with 15 -20 knots and most of the sailors could execute a lot of moves. Taty, Kiri, Tonky, Gollito, Steven van Broeckhoven, Andre Paskowski, Nicolas Akgazciyan and Maarten van Ochten made it in the top 8. The top level sailors impressed by landing their tricks on both tacks and nailing them quite fluid. 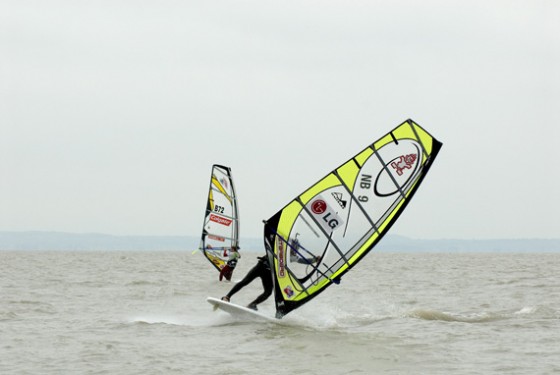 The final between Taty and Steven – Pic: Continentseven

We asked the riders about their best moves:

Taty, the winner, told us: “My best move was for sure a super high Kono on the way out!” Kiri landed a Culo into Spock and double Spock 540. Steven: “My best move was a perfect Culo”. Maarten impressed with super high Airflakas and Gollito slided through a super smooth Flaka 720°. Tonky impressed with perfect Konos and Cana Bravas, Andre with very high normal stance Chachos and Nico fully planned through a perfect Flaka Diablo just in front of the judges. 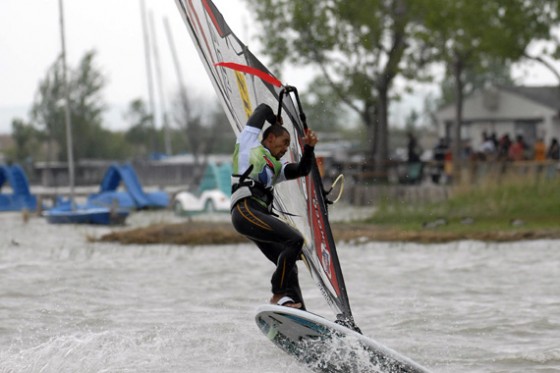 Were there any new moves seen?

No, not really. But the style got more fluid and the tricks get sailed much more accurate in 2010. To make it into a PWA final in 2010 it´s necessary to be able to land Culos, Konos, Shakas, Airflakas, Shoveit Spocks, Double Spocks, Esliders, Chachos, Cana Bravas, Flaka Diablos, Ponch, different double combos like Eslider into switch Chacho or Culo into Spock. Lollypops and Grubbies can be helpful, when the wind drops. And there are just a few guys making forward loops. The best move format needs to go for big tricks instead of loosing points by showing to easy stuff.

It was quite nice to watch the competition. Less crashes, but a lot of landed tricks.

The favourites for the 2010 PWA worldtitle are all inside the top 8 names. We asked Andre Paskowski before the competition about his favourites. “Gollito, Tonky, Steven and Kiri”, he answered. And now Taty is in the lead! So we all are looking forward to very exciting events on the Canaries, Lanzarote and Fuerteventura. For sure Gollito will try to win the next event. Kiri told us that he is very well prepared for stronger winds, Tonky will love the ramps on the Atlantic ocean, Steven will be much stronger than in 2009 and Taty. don´t forget about him. He is definitely on form this season.