Micah Buzianis and Valerie Arrighetti take the victory on the inlet of Alacati, and Antoine Albeau secures yet another slalom world title before the last event on Sylt has been done! 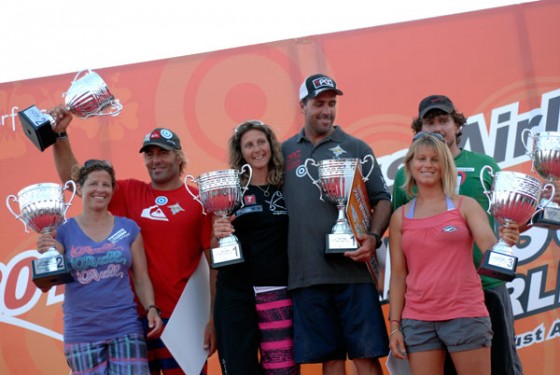 The Meltemi returned on the final day around midday, but failed to blow with full force and gave the competitors and the PWA race crew a hard time. Race director, Juan Antonio Aragon and his team made every effort to get a fifth and final elimination completed, and very nearly managed the first round. 7 heats in the first round could be completed. Most of the sailors were on 8,5 to 9,5 m big sails and their biggest boards. The first jibemark got positioned a bit higher up and the course got set up more cross with less downwind runs. In heat 8, the last one in the first round, were just too many lulls over the course, especially at the second mark. This fact caused the end of racing on the final day. 12 heats would have been needed to coget a valid result, which did not happen. Several riders were very unhappy, but many quite happy that the competition came to an end. The results stayed unchanged, and many sailors frustrated after waiting patiently on standby for much of the day. 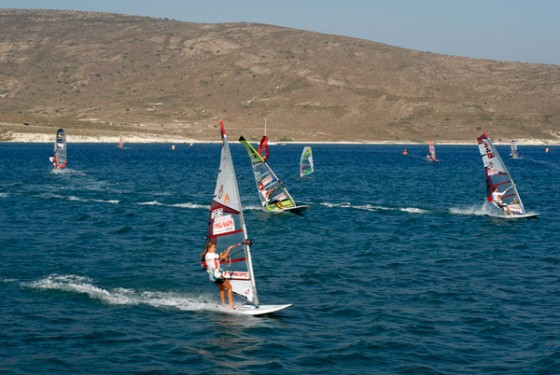 With the results the same as day two – from the 11th till the fourth not one single elimination could be completed – former world champion Micah Buzianis (JP, NeilPryde) can now breathe a sigh of relief after four nerve racking days in the lead. He’s claimed his first event victory of the season here in Alacati ahead of his team mate, and 2009 world champion, Antoine Albeau (JP, NeilPryde), and 2009 vice world champion, Finian Maynard (RRD, Gaastra). It was the first victory of Micah since he has won at Westerland, Sylt in 2006 46 months ago. The US American top sportsman with the sailnumber USA -34 had started his career as a PWA sailor back in 1990 already and is one of the sailors, who are on PWA tour for the longest time. Micah will turn into 40 this November, but promised to be back at Alacati in 2011 again. If we have a look on the top 10, we see the big names still in, but young sailors like Julien Quentel, Alberto Menegatti or local Enes Yilmazer impressed a lot with a big performance. Not in the top 10 are names like Pritchard, Williams, Allen, Van der Steen or Diaz. The biggest surprise of the event was top local Bora Kozanoglu, who avoided to do any over earlies this time and secured a 6th place at his homespot making it into the final twice! 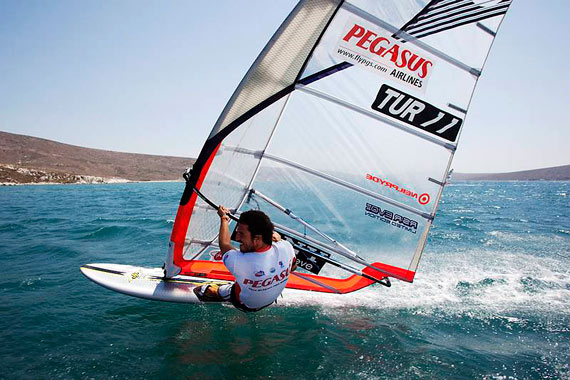 In the women’s fleet, 2009 world champion, Valerie Arrighetti (Tabou, Loft, Mystic), sailing under the name of Ghibaudo for many years, also endured a frustrating four days at the top of the table, but finally took her first event crown of 2010 this evening ahead of former world champion, Karin Jaggi (Patrik, Severne), and transatlantic hopeful, Sarah Hebert (Naish, Naish), who sailed tactically very well and made it into all finals. Valerie had the best starts and took two bullets out of four, but also Karin and Sarah-Quita could win one elimination and both impressed with massive speed. Cagla Kubat finished the competition as the best Turkish sailor in 7th position.

Micah Buzianis stated directly after the event following words:
“It feels amazing to be first here in Alacati because it’s been a while since I last won an event on the world tour. To win this one feels extremely special because I enjoyed the conditions, with the flat water and the lighter winds, which I think favored me much more than I expected. I didn’t use a huge amount of kit here during the first two days that we actually raced, just my 9.5 and 8.6, along with my 132L board. The last four days have been pretty nerve racking being on standby. The couple of days in the middle I felt less so because I was fairly confident that we weren’t going to race, but the last two were hell – it’s always quite terrifying holding on to first place at such a huge event with so many good sailors in the fleet.”

Valerie Arrighetti had following comment on her first PWA victory in Alacati:
“I had a fairly low start to the world tour this year because I didn’t compete in South Korea, and when I went to Costa Brava I didn’t think I’d carry on racing because I had some important personal issues. However, I found that I was still competitive, even without any training, and could still take on the top females such as Karin. This helped with my motivation and so I entered Alacati, where my goal was to win like every year. And, that’s what I did, so I’m really happy.”

The 2009 world champion and current tour leader, Antoine Albeau has sailed consistently enough throughout the season now to secure the 2010 PWA slalom world title with an event to spare. Many times world champion, Björn Dunkerbeck (Starboard, Severne) remains in second overall despite his 9th place here in Alacati, and event winner, Micah Buzianis has firmly held onto third. In the top 10 positions are many changes possible at Sylt. So it will be an exciting final with a lot of pressure for many sailors except Antoine Albeau. Over the season Björn Dunkerbeck put pressure on Antoine Albeau and it looked like it could be an open fight till the end. Björn had bad luck, did not receive his gear on time, had to borrow the whole equipmet on day one at Alacati plus made some mistakes. 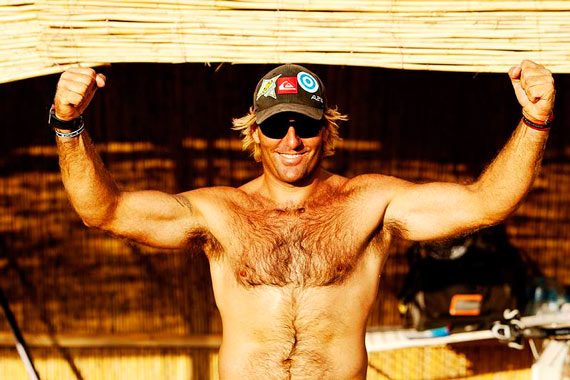 Antoine Albeau (38) gave following comment on securing the 2010 world title for the 5th time in a row:
“It feels amazing to have finally secured the world title before Sylt. Yesterday I felt pretty nervous because we could have still completed a few more races, and I could potentially have dropped out of the top 3. But, later in the day today I began to feel much more relaxed because I knew that we could only finish one race, and as the day went one it became more and more clear that we wouldn’t even do that. The racing this year has gone really well, although it feels like a bit of a short season, but there’s still one more event to go, and I will definitely be there giving it my best shot to win like always!”

With a second place finish in Alacati, former world champion Karin Jaggi retains her position in first place overall, and has secured a top 2 finish for the year. Due to official tiebreak rules – if Valerie Arrighetti would win the next event – all Jaggi needs to do to win the 2010 world title is simply turn up in Almanarre and race. If for some reason she failed to do this then Arrighetti would still be in with a chance of claiming first on another tiebreak rule. The 2010 freestyle world champion, Sarah-Quita Offringa (Starboard, Gaastra) has retained her position in second, and Alice Arutkin (Starboard, North) remains in third.

chris2010-08-29T17:08:26+02:00August 15th, 2010|
Subscribe
0 Comments
Inline Feedbacks
View all comments
This website is using Google Analytics. Please click here if you want to opt-out. Click here to opt-out.
0
0
Would love your thoughts, please comment.x
()
x
| Reply
We use cookies to ensure that we give you the best experience on our website. If you continue to use this site we will assume that you are happy with it.OkNoRead more