Day 5 had a much better windforecast than the last two windless days. The wind switched into the right direction in the early afternoon and the sailors could plane on their biggest sets. The PWA announced the first possible start for 14.00, but the wind was too light on the inside. The racecrew measured just 7 knots and less. 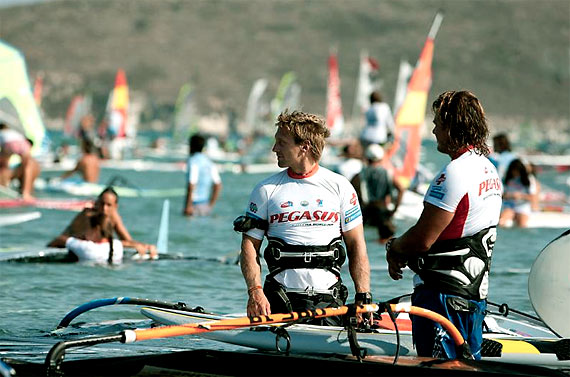 Robby Swift and Ben van der Steen are not sure about the wind (Pic: John Carter, PWA 2010).

The sailors had to stay on stand by. Many of them went on the water to have fun on their lightwind gear on the extremely flat water. The wind never really came back again and big holes were on the course. More and more sailors joined the water, because they already felt that it will not happen any racing on the 5th day as well. At 17.15, after endless announcements the waiting period was over. Very loud music, free beer and stage shows were following. 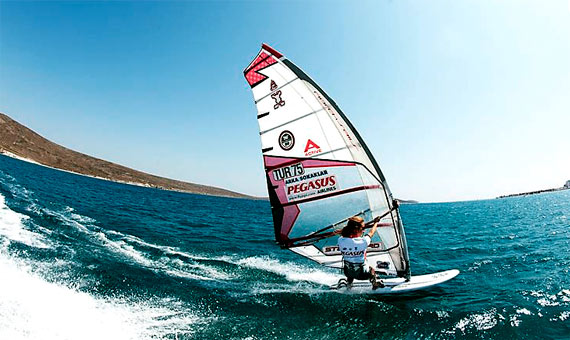 Tomorrow we will see the final day, which can be called a judgement day.

The 2009 world champion and current tour leader, Antoine Albeau (JP, NeilPryde) is just a day away from securing the 2010 world title. As it stands, if Albeau can maintain his position in 2nd, or even overtake his team mate and current event leader, Micah Buzianis (JP, NeilPryde) then he will have done enough to take the 2010 title without actually having to step on his board in Sylt.
If however, Albeau falls out of the top 2 here in Alacati, then the title will go right to the wire in Sylt, and will all depend on where his nearest rival – one of the undisputed legends of windsurfing – Bjorn Dunkerbeck (Starboard, Severne, Mystic) finishes there. This event is almost bound to be Dunkerbeck’s discard now, but if he wins in Sylt he could still beat Albeau and claim the title. Although, for that to happen Albeau has to finish 3rd or worse both here and in Sylt!
There’s a similar situation in the women’s fleet too, with former world champion, Karin Jaggi (Patrik, Severne) battling with the 2009 world champion, Valerie Arrighetti (Tabou, Loft, Mystic). Jaggi is currently lying in second place here, but if she overtakes the current event leader, Arrighetti then she too could secure the 2010 world title with an event to spare.
However, if Arrighetti can stay ahead of Jaggi here then she will have a shot at the title in Almanarre at the beginning of September. Even if Jaggi and Arrighetti were tied on points, whoever wins the last event would take the title.
There are a huge number of ifs in these calculations, and you have to remember that all of it can change in an instant. But, we could still potentially see two world champions walking away from Alacati!

The current ranking stays the same after the 5th competition day with Valérie Arrighetti (FRA-444) and Micah Buzianis (USA-34) in the lead and looks as following:

Current ranking of the event after 5 days: MEN I WOMEN