Everything is prepared to leave the beach of Jinha in South Korea. 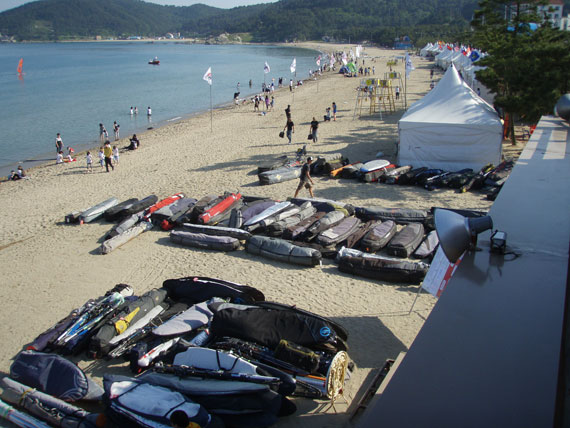 Following two consecutive days of fast and furious racing, the competitors were greeted on day 7 with glorious sunshine and flat calm waters off Jinha beach. All the signs were present for the thermal breeze to build, but by the cut off point of 14:00 the conditions remained the same. 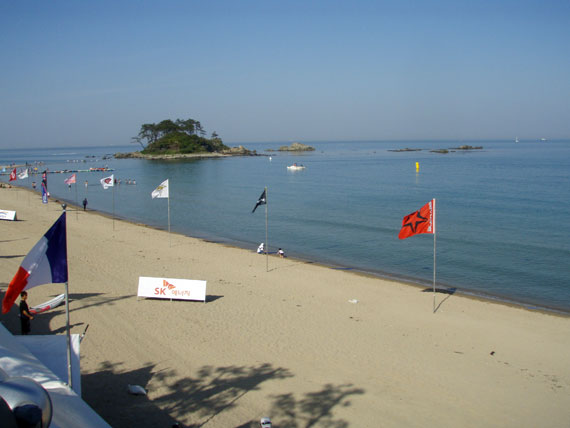 No wind but sunshine on the last day - Pic: Continentseven

This left the event leaders from day 6 basking in both the sun and their glory, having claimed victory at the first PWA slalom world tour event of 2010.

Antoine Albeau (JP, NeilPryde) sailed consistently all week with very few mistakes or surprises, to claim his crown with a convincing margin. His nearest rival, Björn Dunkerbeck (Starboard, Severne) showed moments of pure excellence, but a few mistakes gave Albeau the chance to relax. Alongside Albeau and Dunkerbeck, Finian Maynard (RRD, Gaastra) and Cyril Moussilmani (Starboard, North) both claimed final race wins, but couldn’t quite match the consistency of the 2009 World Champion. Putting in an awesome performance, and only failing to qualify for the finals once, was Jimmy Diaz (Starboard, North), who takes up the remaining spot on the podium. At times, he was out in front with the world’s fastest. Perhaps we’ll see more of the president on the podium throughout the year.

Following a premature start in race one, the legendary Karin Jaggi’s (Patrik, Severne) experience shone through, helping her to claw back the top spot. The freestyle world champion, Sarah-Quita Offringa (Starboard, Gaastra) bounced back into 2nd after a convincing final race victory. But, she sailed the wrong course in the penultimate race which she was leading, and later discovered that if she’d taken that bullet, she would have crept into first overall! The young star, Alice Arutkin (Starboard, North), put in a stunning performance on the first day of racing to take the early event lead, but a few premature starts later saw her losing her grasp and finishing 3rd.

Antoine Albeau: “It’s always difficult at the first event because nobody knows who’s going to be fast, or who’ll be in top shape for the new season. I was the only guy to qualify for all of the winner’s finals, which means I was really consistent. I didn’t make too many mistakes, and I won three out of the six races. This was basically the perfect event for me.”

Karin Jaggi: “I’m super stoked to have won here in Korea, especially as I started off so badly with my premature start in the first race. You can’t really get a worse start to the season, but it was totally my mistake so I only had myself to blame. After that I had a hard time catching up and getting my thoughts focussed again. Luckily we had a few more days of wind, and I scored some great results, apart from my crash in the last one. You can’t really do anything about that though because that’s racing. I’m feeling really good on my equipment, and I think I’m faster than last year, so I’m looking forward to the next event in Costa Brava.”