A tough day at the office sees Karin Jaggi leap out in front, whilst Antoine Albeau strengthens his lead as his rivals fall by the wayside. 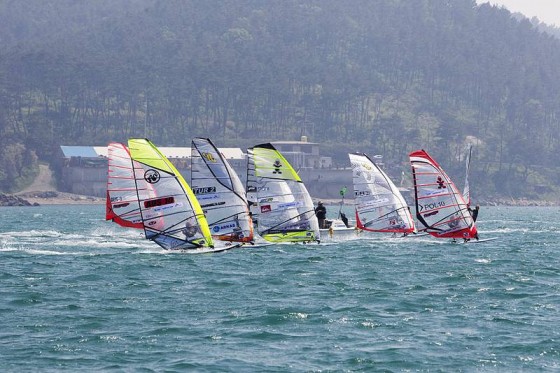 With signs of a thermal wind kicking in early, the beach was awash with competitors from the early morning. By midday, the wind had swung and began to build, allowing two full eliminations to take place for both the men and women in glorious sunshine on the turquoise waters off Jinha beach.

With winds gusting between 10-16 knots, the majority of the fleet chose to compete on the largest board they’d registered, and sails between 8.5m and 10.0m. However, with some stronger winds blowing through on occasions, and some even bigger lulls, choosing the correct gear for the conditions was the key to success.

Albeau Again
Antoine Albeau (JP, NeilPryde) dominated the first race final strengthening his lead on Bjorn Dunkerbeck (Starboard, Severne) and the rest of the fleet. After the first gybe, he pulled out a comfortable lead and never looked back. If he had, he would have noticed that his nearest rival, Dunkerbeck, was still piling on the pressure racing ahead of the rest of the pack in 2nd.

However, the second race final was a completely different story. After a mediocre start, Albeau was just mid fleet at the first gybe mark. Not one to lose hope, Albeau gained a few places by cutting inside of everyone, and powered out of his turn in third. At mark two, Finian Maynard (RRD, Gaastra) closed the gap on the inside, blocking Albeau from doing the same again. So instead, he executed a fine gybe on the outside of Maynard to edge past and claim 2nd. Albeau was left without a chance of claiming another bullet, after an amped up and injured Cyril Moussilmani (Starboard, North), who was out to make amends for his performance in race 5, powered off into the distance to claim a convincing victory.

Although Albeau is out in front again, and doesn’t seem to be that much faster than anyone else, he simply isn’t making any mistakes. And to make matters worse, when the chips are down for his rivals, he’s always there to capitalize on the situation.

Jaggi Ceases The Day
Costly mistakes by her closest rivals made the first women’s final an easy affair for Karin Jaggi (Patrik, Severne). A premature start by the overnight leader, Alice Arutkin (Starboard, North), during her round one heat, ruled her out from even qualifying. And, Sara-Quita Offringa (Starboard, Gaastra), who was leading the final at the first gybe, sailed off downwind towards the wrong mark, clearing the way for Jaggi, who then pulled clear ahead of the rest of the pack.

The race 7 final wasn’t such a walk in the park. With everything lying on the outcome of this one race, Arutkin and Jaggi were fighting hard right from the start. In the most action packed race of the event, they were neck a neck going into the first gybe, but Arutkin took things a little too far, crashing into Jaggi, and putting them both at the back of the fleet. This left the freestyle world champion, Offringa, to redeem herself of her previous mistake, and claim her first bullet of the event. 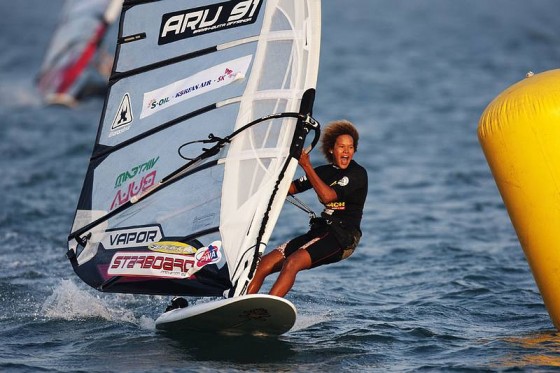 Arutkin managed to beat Jaggi in the final race, but it wasn’t enough to put her back on top. Instead her mistake had not only cleared the path for Jaggi to take the lead, but she’d also allowed Offringa to sneak past.

The forecast for the last day of competition tomorrow ist not that promising. But if the thermal effect comes through everything is possible.