The day started with fog and no wind. But in the early afternoon a breeze showed up and the PWA racecrew could run one full round. Karin Jaggi took another victory and Antoine Albeau could win race 4. 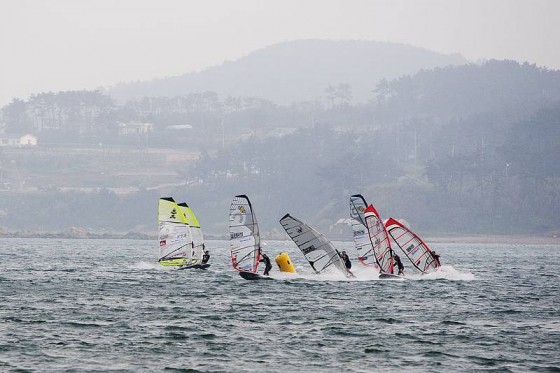 Following two days on standby, day five of competition began in a similar fashion. However, with signs of the weather clearing up, race director, Juan Antonio Aragon, made the call for the sailors to be ready to race at a moment’s notice. By 14:30 there were promising signs that racing would take place, and within the hour, the competition was in full swing.

Unstoppable Albeau
In his usual dominating fashion, Antoine Albeau (JP, NeilPryde) fought his way through his initial heats, straight into the finals, and claimed yet another race win whilst many of his rivals were left to battle it out elsewhere. During the early rounds, the current world champion was seen almost relaxing round the course. He even allowed Alberto Menegatti (Starboard, Simmer) to pass through and claim victory on the last leg of his first round heat. 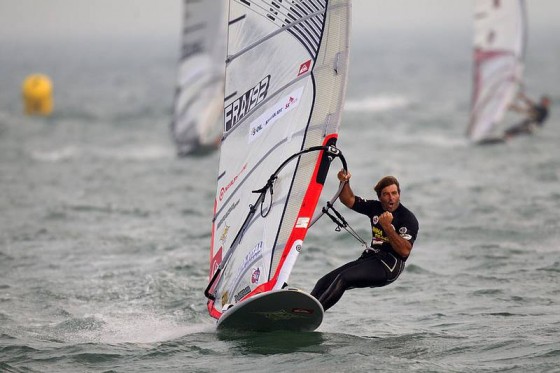 For many others however, the day was a completely different story. Shocking mistakes and premature starts, all contributed towards a day of upsets, and realignment on the results sheet.

The first of the frontrunners to fail to get through a single heat was Israeli racing sensation, Arnon Dagan (Tabou, Gaastra). He had a cracking start, but ended up at a standstill after the first mark. Throughout the heat he was hanging on for the final qualifying spot, but got pipped at the post by Czech racer, Tom Malina (Fanatic, Simmer).

Next up, Cyril Moussilmani (Starboard, North) led a charge towards the start slightly early, taking 2 others over with him, and straight out of qualification. A disappointing way to start the day.

Moussilmani seemed to set the trend for things to come. Josh Angulo (Angulo, Gun), Dan Ellis (Mistral), and Wojtek Brzozowski (Starboard, NeilPryde) all followed suit in the second round. Then during the qualifications for the finals, both Kevin Pritchard (Starboard, Gaastra, Dakine), and Ross Williams (Tabou, Gaastra) made the same mistake.

The biggest shock was yet to come however. During Björn Dunkerbeck’s (Starboard, Severne) qualification round for the finals, he flew off the line with amazing speed and went straight into the lead. After rounding mark one with ease, he sped down the straight, but lost it on the second gybe, allowing everyone to pass him. This mistake allowing Albeau an easy final with one of the PWA’s fastest missing from the word go.

Overall, Albeau has now pulled out in front ahead of Bjorn. The real battle however is for third, where Maynard, Steve Allen (Severne), Jimmy Diaz (Starboard, North), and Micah Buzianis (JP, NeilPryde) are all within 1.3 points of each other.

Climbing The Ranks
Whilst most of the world’s best were hitting the wall, Finian Maynard (RRD, Gaastra) was quietly plugging away, making amends for his premature start in the very first race of the contest.  After winning all of his heats, he cruised into the final and sailed home in 3rd, putting him back on the radar and in the top 3 overall. 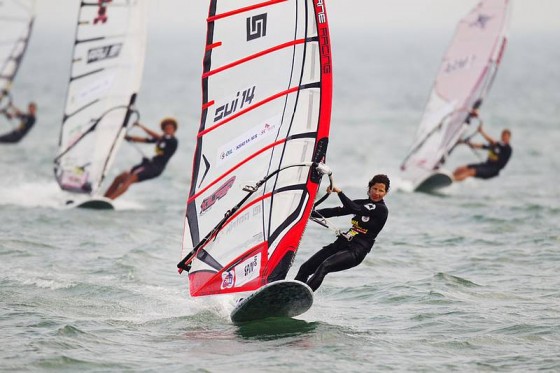 Jaggi Closes The Gap
The women’s fleet sailed in a split heat format today to enable the top 8 to rise to the top and battle it out in an all action final. Eight women managed to qualify, but only five actually sailed it!

Following in her team mate, Cyril Moussilmani’s footsteps, Alice Arutkin (Starboard, North) powered off towards the first mark a few moments early, and gained a premature start in the process, leaving her to watch on as Karin Jaggi (Patrik, Severne) led the pack to victory, and narrowed Arutkin’s lead overall.

Arutkin wasn’t the only victim of an early start in the women’s fleet today though. Her fellow French lady Morane Demont (Starboard, Severne) also pushed it too hard, allowing Sarah Hebert (Naish) to overtake her in the rankings.

Jaggi is now piling the pressure on Arutkin, with only 2 points separating them overall. Over the next few days it’ll be exciting to see whether experience or youth will win on the Sea of Korea.