On the sixth day of competition Dunkerbeck edges past Albeau to lead the men’s event standings by a fraction of a point. Meanwhile, Arrighetti further extends her event lead with more near flawless sailing on competition’s penultimate day in Korea. 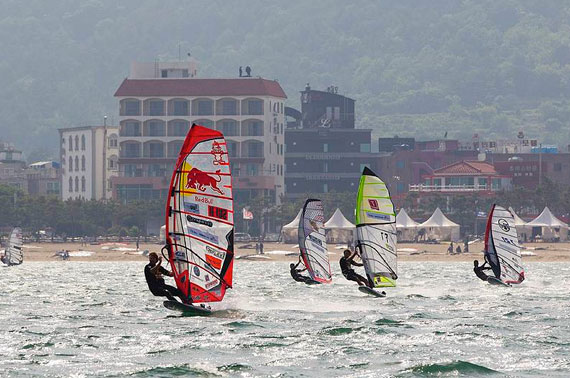 Picking up the unfinished race 4 from the previous day, the men’s final lit up the East Sea as the two sentinels of slalom racing; Albeau and Dunkerbeck went head to head in a bid for event supremacy.

Exchanging positions down the first leg, Dunkerbeck gained a narrow margin through the subsequent reaches, leaving a classic finish line drag race to determine who’d claim the elimination. The jaw-dropping spectacle eventually saw Dunkerbeck pip Albeau to the finish line, but not without Dunkerbeck having to dig deep. Trailing them, Peter Volwater posted far and away his best result of the event so far in third.

Next in the day’s play was the women’s finals, which saw stable mates Valerie Arrighetti and Sarah-Quita Offringa take inspiration from the Dunkerbeck-Albeau clash, as they staked their claim for the day’s best finish line drag race. Matching the drama of the men’s final, the pair screamed down the final reach neck and neck, leaving the finish line crew the tough job of calling a winner. Ultimately, Arrighetti was rewarded with the win, handing Offringa a well fought second position, with France’s Morane Demont clinching third.

The women’s losers final was won by Alice Arutkin, who uncharacteristically failed to advance to the winners final. She’d have to settle for eighth overall in the elimination, her first blip in an otherwise impressively consistent run of results.

RACE 5
In that men’s elimination there was plenty to talk about; the UK’s Ross Williams continued to be marred by his start line eagerness, when he false started alongside Fred Morin in the second round of heats. That would end the pair’s racing for the day.

The biggest shock of the elimination would come in the first semi final, when Albeau suffered his first major blunder of the event, and failed to qualify for the winner’s final. That slip up left the door wide open for Dunkerbeck, who methodically advanced through his semi final into the final, and within touching distance of the event lead. 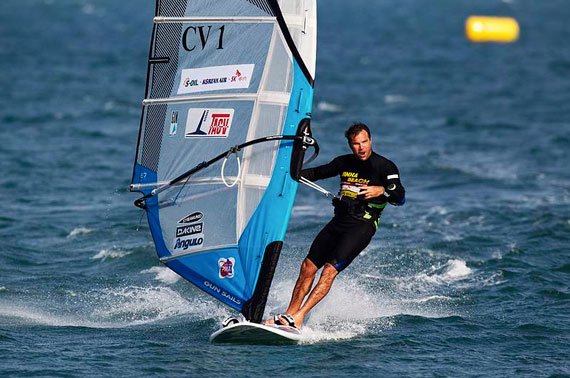 Cue the final, and Josh Angulo dialed into the stellar form he’s been enjoying this event. Leading from the outset, Angulo set the pace at the front of the fleet, while Micah Buzianis fended off Dunkerbeck in a battle for second. Moving into the final reach, Angulo had done enough not to worry too much about the ferocious antics behind him, as Buzianis and Dunkerbeck continued to spar for second, and effectively the event lead for Dunkerbeck. Despite Buzianis sailing the heat of his event, he couldn’t hold off the might of Dunkerbeck, and conceded second position to windsurfings most highly decorated man, and in turn the event lead.

Behind them, Alberto Menegatti made a massive leap up the ranks by coming home in fourth in his first foray into winner’s finals whilst Pierre Mortefon continued his impressively consistent event run in fifth.

Sneaking in two women’s heats before the wind died, both Offringa and Arrighetti won their respective bouts, leaving the winners and losers finals to be sailed first thing tomorrow morning.

The final day’s skippers’ meeting has been scheduled for 10.30am, with a first possible start at 11.00am. Be sure to follow all the action from day seven in Korea from then onwards.