Kicking off the first of the European slalom fixtures, the men’s racing fraternity take to the waters of Spain’s stunning Bay of Roses, where the 58 strong fleet will bid to stake their claim on the crucial world cup ranking points and €40,000 up for grabs. The ladies do not see a competition in 2011 at Costa Brava. Their next event will happen in Aruba in the Racing discipline.

Marking the third stop for the men’s slalom tour, the Catalunya Costa Brava World Cup takes place at the picture perfect town of Sant Pere Pescador, 150km to the north east of Barcelona on Spain’s alluring Mediterranean coastline. Synonymous with thermal winds and idyllic white sand beaches, it comes as no surprise that the event continues to lure record numbers of competitors to spar at the Bay of Roses’ famed slalom arena.

Historically, the event has witnessed everything from super-steady thermal breezes, producing multiple back-to-back eliminations, to sporadic bouts of white-knuckle slalom carnage in the roaring Tramontana wind, which howls down from the Pyrenees mountain range intermittently throughout the summer months. And it looks like the strong Tramontana could kick in from the first event day on. Here is a link to the windforecast on windguru! 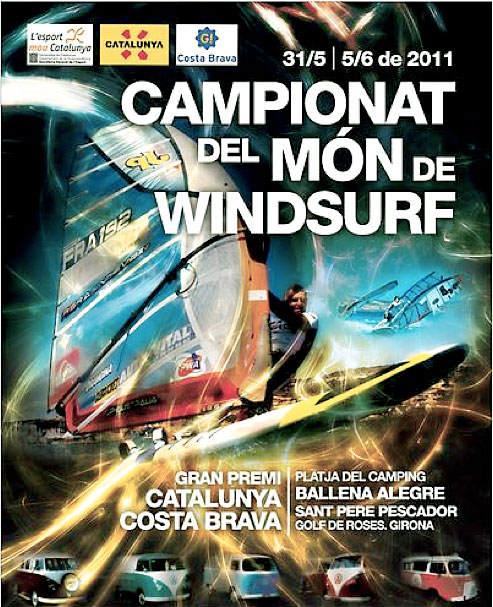 What’s The Deal at the Costa Brava?

A six day slalom spectacular from the 31st of May till the 5th of June 2011, featuring the cream of the PWA’s men’s racing division unleashed on Catalunya’s breathtaking Golf De Roses for their third world cup showdown of the year. Up for grabs is a slice of the events €40,000 prize purse, and the enviable accolade of being crowned the king of the Costa Brava.
A first possible start is scheduled for 14.00 on the 31st.

Who are the favourites?

With two events in the bag, Bjorn Dunkerbeck (Starboard / Severne / Mystic / DunkerbeckEyewear) currently sits at the top of the men’s ranks after back-to-back wins in both Vietnam and Korea. An additional win at 2010’s final slalom fixture in Sylt points to a stellar run of form from windsurfing’s most iconic athlete. In the wings and angling for his sixth slalom world title, Antoine Albeau (JP / NeilPryde) will be aiming to put an end to Dunkerbeck’s impeccable score sheet. Victory from Dunkerbeck in last year’s Costa Brava World Cup, and a winning streak that’s showing no sign of abating, have Albeau uncharacteristically entering this event as the underdog. 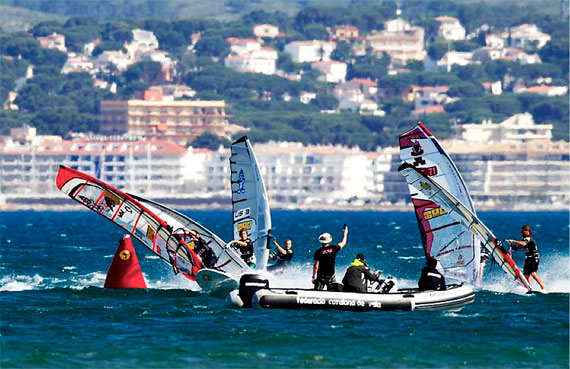 On form and charging like never before, Josh Angulo (Angulo / Gun / Dakine) poses a major threat to the vice like grip the Dunkerbeck-Albeau axis have over the top ranks. Following a move from Cape Verde to Boston and a positive shift in his personal life, Angulo’s got fire in his belly and the skills to deliver if he can dial into the consistency he enjoyed in Korea.

A surprise candidate emerging from outside the top ten is France’s Pierre Mortefon (Fanatic / North). Fourth place in Korea, including an out and out elimination victory has cast no doubt over the ability of this up and coming slalom talent. At just 21 years old he may not have the experience of his peers, but with nothing to lose and proven race winning performance, he’s certainly not to be ruled out then the green flag goes up.

Also in the mix is the usual assortment of slalom’s a-listers: Ben Van Der Steen (Starboard / Loft / Mystic), Cyril Moussilmani (Starboard / North) and Finian Maynard (RRD), who relentlessly continue their assault on the hallowed podium steps. Steve Allen (Starboard / Severne) is the only top sailor, who is missing the event. The currently ranked number 3 will compete in Italy, Riccione at a Formula Grand Prix. Top registered nation is France with 12 competitors, followed by Itlay with 9 starters and 7 sailors from Germany. Overall the event has sailors from 21 different countries.

chris2017-01-19T15:34:20+01:00May 31st, 2011|
Subscribe
0 Comments
Inline Feedbacks
View all comments
This website is using Google Analytics. Please click here if you want to opt-out. Click here to opt-out.
0
0
Would love your thoughts, please comment.x
()
x
| Reply
We use cookies to ensure that we give you the best experience on our website. If you continue to use this site we will assume that you are happy with it.OkNoRead more