A day of contrast in Lanzarote, marginal conditions kept the sailors on hold throughout the day until a sudden burst of breeze stirred up a frenzy to finish. Large patches of light wind ensured the conditions were unsuitable for a fair competition to take place.
The sailors spent the afternoon waiting for the wind to fill in, listening to the tunes on the beach and relaxing in the main tent. As the sun dipped down it was all change. Head judge Duncan Coombs announced competition would commence from 5pm, allowing three heats to be completed before the conditions died off. 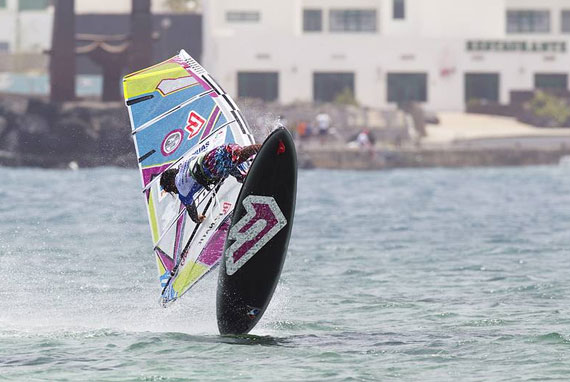 Three heats full of excitement saw the demise of Meir and Yegor Popretinskiy to world champion Estredo and Bjorn Saragoza. Davy Scheffers took on the mighty Thode in heat 21. Scheffers opened the heat with full force knowing it would take a lot to defeat his opponent. Thode fought hard however the light winds were causing a few problems in Thode’s routine, seeing a surprised Scheffers work his way into the semi-final. Meanwhile Van Broeckhoven was going about landing his perfect power moves in the challenging conditions, whilst Phil Soltysiak looked to be struggling to find enough power to complete his maneuvers.
Heat 22 saw Anthony Ruenes take down Taty Frans with his collection of carefully polished maneuvers, displaying his one handed shaka, that saw him defeat Taty’s brother Tonky Frans yesterday. On the other side of the heat Estredo flew past Saragoza who was struggling to deal with the complex conditions.

The PWA took advantage of the down time during the day, and caught up with four times world champion Jose ‘Gollito’ Estredo to find out his thoughts on the 2011 tour.


How are you feeling, entering this event after a slower start to the year than usual?
It feels great to be here in Lanzarote for my sixth time. I always feel good when I am here, the conditions are great and the people are really friendly, I feel confident that I will sail well here.

Why do you think Kiri and Steven have won the events so far this season?
They are both sailing really well this year and they improved a lot especially in the light winds. I don’t really like lighter wind so I haven’t been training in them, that much.

Do you think you are more suited to the conditions in the Canary Islands than the earlier events on the tour?
I much prefer the stronger winds and I think I am much better in them; I need the stronger winds to do the power moves and the aerial moves.

You have been doing a few waves events; do you hope to do a few more?
I would like to do the entire wave series, I really enjoy the events, they are great for practicing and we will see how I do. I would also like to do some slalom events too; I have done some at home, but maybe not for a few years. I will concentrate on the wave and freestyle tour for now.

Where do you hope to come in Lanzarote?
I think the conditions are on their way, so I should be able to take advantage of the stronger winds and the waves to pull my air moves and hopefully I will do well.

Hey, Gollito, I like you very much, even if you did’nt won the first events. I know that you have still some reserves. I have seen your Kuma video on Sotavento last year(Fuerte ventura), where you made an amazing air flaka diabolo (all in the air). Morover you have a lot of other spectactular manouvers, like Cono Frontloop (so seen in Jeri), no handed burner, double burner, or your frontloop, which starts clew first and whilst you rotate you switched back to normal. I think, you have more crazy moves in the backhand. Don’t led defete you. You have to… Read more »

tottaly agree with you.I think I we get more strong wind in fuerteventura gollito will win again.In the past events there were some storng wind heats but mos of them were runned in average conditions. Gollita needs that extra power on the sail to make his best stylish moves Now we know he won laznzarote event so I think there will be agreat fight between “big trio” to the last event.